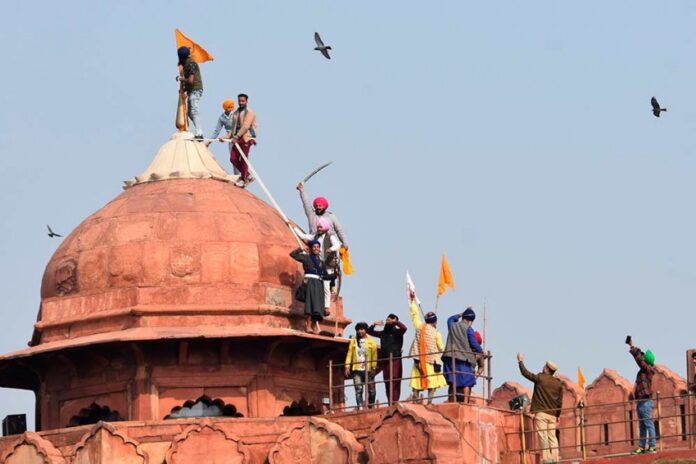 2021 Highlights
From the coronavirus pandemic to farmer protests, poll violence, Olympic gold, Afghanistan violence, Haiti earthquake, new variant of Covid (Omicorn, after Delta) found in South Africa, the year 2021 was filled with life-changing events. Here is a recap of some of the prominent events.

26 : Indian farmers’ violence. A tractor march meant to highlight farmers’ demands dissolved into anarchy on the streets of the national capital on Republic Day. Rampaging protesters broke through barriers, fought with police, overturned vehicles and delivered a national insult – hoisting a semi-religious flag from the ramparts of Red Fort, a privilege reserved for India’s tricolour. Protesters clashed with police in multiple places, leading to chaos in well known landmarks of Delhi and suburbs, leaving the farmers’ two-month peaceful movement in tatters.

FEBRUARY
7 : Uttarakhand flood. Disaster struck the Chamoli district of Uttarakhand in the form of a deluge and avalanche. As per the government reports submitted in Lok Sabha, the disaster killed 80 people, and 204 people are still missing.

27: Prison break in Haiti : At least 25 people died after hundreds of prisoners planned an escape from a Haiti prison. Nearly 200 prisoners succeeded.

MARCH
Bengal post-poll violence : Violence erupted after the Mamata Banerjee-led Trinamool Congress returned to power for a third consecutive term. The vanquished opposition foisted unconfirmed allegations of alleged murders, rapes, and vandalism that seemingly happened across the state following the announcement of the results of the 2021 West Bengal Legislative Assembly election.

MAY
5 : Mamata Banerjee takes oath as chief minister of West Bengal for the third time.

16 : Cyclone Amphan made landfall in West Bengal and Odisha. Up to 300,000 people in coastal areas were in immediate danger, at least 12 people died. Cyclone Amphan was a disaster bigger than Covid-19, said Mamata Banerjee.

Coronavirus Crisis in UP : Thousands of dead bodies are found floating or washing up the shore of the river Ganges. The corpses also include people that died due to Covid-19.

COVID-19 : India’s oxygen crisis: After a new coronavirus variant unleashed a brutal second wave of infections in India, hospitals in the country faced their worst nightmare with shortage of oxygen tanks and beds. Many hospitals in Delhi and around the country ran out of oxygen, with hundreds dying from a shortage of oxygen. However, the centre has claimed no deaths due to oxygen shortage were reported by states and UTs during the second COVID-19 wave.

21 : Raj Kundra Scandal:  Businessman Raj Kundra, husband of actor Shilpa Shetty, spent two months in jail after his arrest in a case related to alleged creation and distribution of pornographic films through apps.

24 : Pegasus spyware controversy : The phone numbers of over 40 Indian journalists were on a hacking list of an unidentified agency using Israeli spyware Pegasus. Those on the list of potential targets included journalists at Hindustan Times, The Hindu, The Wire, The Indian Express, News18, India Today, etc.

AUGUST
Till August 8 : Tokyo Olympics 2020: India finished 48th on the medals tally in Tokyo, its highest ranking in over four decades. 1 gold, 2 silver, 4 bronze India produced it’s richest-ever medal haul and the finest performance of all time at the 2020 Tokyo Olympics.

7 : Special day at the Games: Neeraj Chopra, the 23-year-old javelin thrower from Haryana, became only the second Indian to win an individual gold in the Olympics, the first in athletics. Mirabai Chanu won silver medal in weightlifting and India beat Germany, winning bronze after 41 years in Hockey.

15 : The Afghan Disaster: As US troops left, Taliban retook Afghanistan after 20 years. US President Joe Biden said he left Afghanistan to avoid bloodshed.

16 : Haiti Earthquake: Haiti was shaken to the roots as a 7.2 magnitude (Richter scale) earthquake hit Haiti, killing over 2,200.

16 : Virat Kohli announces that he will be stepping down as captain of the IPL team RCB at the end of the season.

9 : Air India returns to Tata after 70 years: Tata Sons won Air India bid, the airline it founded nearly 90 years back – as the government accepted its winning bid of Rs 18,000 crore to acquire 100 per cent of the debt-laden state-run carrier.

24 : India crash to Pakistan as the T20 World Cup begins.

NOVEMBER
1 : The Supreme Court of India orders to constitute an independent panel to make a comprehensive probe into the Pegasus (spyware) snooping scandal.

19 : Narendra Modi government relents, decides to spike farm laws: Prime Minister Narendra Modi announced the repeal of three contentious farm laws, assuring farmer groups protesting against them for the past year that the legislative process for the repeal would be completed in the upcoming Winter Session of Parliament.

Omicron variant in Europe earlier than thought: Even before the arrival of Omicron, European countries were witnessing a resurgence of the disease. The scary thing about this is that countries such as Austria and Germany are developed nations, with high rates of vaccination.

8 : Chief of Defence Staff Bipin Rawat and 12 others are killed in a chopper crash near Coonoor, Nilgiris district, Tamil Nadu.