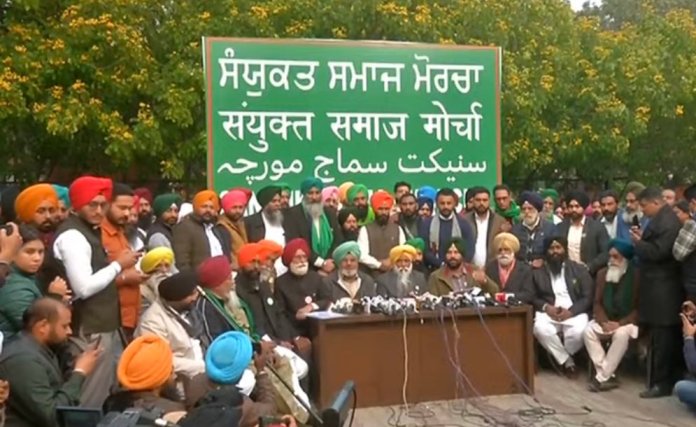 As was expected, the successful farmer’s agitation in Punjab has finally mutated into a political movement and a political party. This was almost a natural phase change, one would have thought, but initial indications were that the farmers were not too interested in being part of a political party and into administration. Somehow, the mindset changed, and 22 farmer unions formed a political front, the Samyukta Samaj Morcha (SSM). The Morcha will contest the state assembly polls early 2022.

With the Aam Admi Party (AAP) already having cornered the majority of the farmer agitators – the rest being with the Congress within its fold, how much challenge to that the SSM can present will be a question only the final mandate can say, but one thing should be clear: there will be segregation of votes. There will be legitimate AAP and Congress votes that will now go to SSM, and all will be to the Bharatiya Janata Party’s (BJP) benefit.

SSM has farmer leader Balbir Singh Rajewal as its chief. Harmeet Singh Kadian, president of the BKU-Kadian (Bharatiya Kisan Union), told media persons in Chandigarh recently: “Ever since we won the battle at Delhi borders and came back to Punjab, the expectations of the people of Punjab from us have increased and there was a lot of pressure from them to enter into politics. Currently, there are 22 unions and two unions have extended their support. Going forward more unions will join us.”

Rajinder Singh Deep Singh Wala, vice-president of the Kirti Kisan Union, one of the large farmer unions of the state, added: “Whoever among the unions is going to contest assembly elections, will not use the SKM (Samyukt Kisan Morcha) name. Our organization has decided not to contest the election as we want to remain as a strong pressure group.

One can dive into the possible genesis and development of this idea with a background check preceding it. Frankly, politics in Punjab just got murkier.

The political spread now
The 22 farm unions that have joined hands were among the 32 farmer organizations in Punjab which participated in the year-long protest against the three farm laws.

Harmeet Singh Kadian has made it clear that the SSM has been set up with the polls in sight, wanting to replicate the massive victory the agitation achieved in forcing the Union government to repeal the three contentious farm laws (scrapped on November 19).

The 22 farm unions that have joined hands were among the 32 farmer organizations in Punjab which participated in the year-long protest against the three farm laws.

The SSM (Samyukt Samaj Morcha) has decided to contest all 117 seats in the state. This means there will be no scope for any understanding with the Congress or the AAP. SSM will be led from the front by prominent farmer leader Balbir Singh Rajewal, who said that a decision has been taken to change the existing system in the state.

“A new ‘Samyukta Samaj Morcha’ is formed for contesting Punjab Assembly elections. 22 unions have taken this decision. We need to change the system and want to appeal to people to support this morcha,” said Rajewal. It is not clear what ‘changing the system’ means.

Yet another party
That was not the end of the story. Bharatiya Kisan Union (BKU) leader Gurnam Singh Chaduni soon launched his own political outfit called Sanyukt Sangharsh Party. Talking to the press, Chaduni said that the party plans to contest in all 117 seats in the upcoming polls in Punjab.

His refrain was similar. “Our objective will be to purify politics and bring good people forward,” said Chaduni who is also the president of the Haryana Bhartiya Kisan Union. Having entered the political arena, Chaduni then hit out at political leaders, saying: “they frame policies in favour of capitalists while ignoring the interests of the poor.”

Will this help the BJP win the election? Perhaps not immeditely. The biggest gain will be in the increase in vote percentage share in the long run.

The Samyukt Kisan Morcha has ruled out contesting the polls, saying its name should not be used or that of its member groups, for election purposes. Hence a new name. Solves the problem.

The equation
Having acknowledged the underlying currents, one can easily see what a snake-pit Punjab politics is becoming, approaching the filth of a Uttar Pradesh.

How did the mix accelerate so fast? One can clearly see the hand of deposed Punjab chief minister Amarinder Singh in this. He himself was thinking on the lines of a new political party, but the effort involved was huge and, anyway, the BJP was willing to bankroll his effort at destabilising existing party structures. The new farmer outfits in fray today will be fully bankrolled by the BJP; that is easy to realise.

Will this help the BJP win the election? Perhaps not immeditely. The biggest gain will be in the increase in vote percentage share in the long run. In the 2019 general elections, the Congress and the UPA got 40.12 % of the votes, while Shiromani Akali Dal and NDA got 27.45 %. The BJP on its own managed just 9.63 % and the AAP got 7.38 percent.

This time around, with the farm laws in the backdrop, the AAP and the Congress expect a better fare, and since the SAD is not in the UPA, BJP’s fate would have been rather poor.

The issue is, if the farmer unions (now two political parties) manage a large vote share, there will be a general perception of a better performance by the BJP. This is good for the morale, and good for future election strategies.

The face of Punjab politics will have changed, forever.