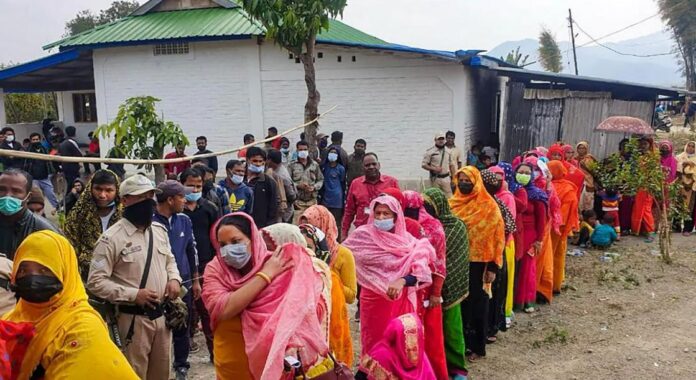 A voter turnout of 78.03 per cent was recorded in the first of two phase elections in Manipur, sealing the fate of 173 candidates. In the 2017 assembly election, The official said that the first phase polling, held on March 4, 2017 in 38 seats, recorded 86 per cent turnout.

The voting was held at 38 constituencies spread across five districts including Imphal East, Imphal West, Bishnupur, Churachandpur, and Kangpokpi. The state has a total of 60 assembly seats.second phase of election will be held on March 5, for 22 Assembly seats.

BJP is fielding candidates in all the 38 seats while the Congress is contesting 35, the JD(U) 28 and the NPP 27.

A Manipur Police personnel, who was on poll duty on Monday, was killed by accidental firing, said Chief Electoral Office (CEO) Rajesh Agarwal.