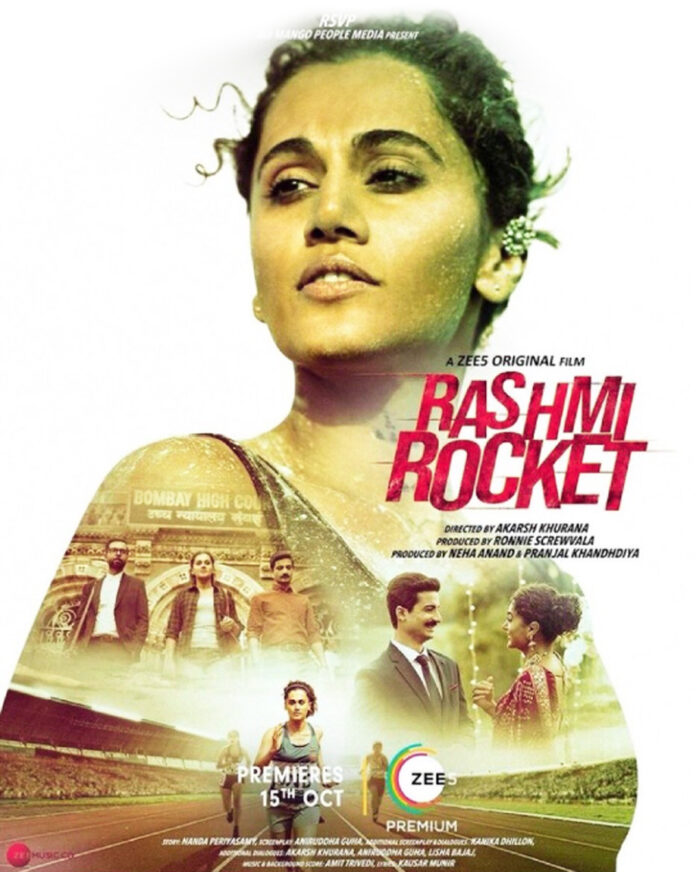 Rashmi is a talented athlete with some genetic uniqueness This brings constant media glare, all negative, and affects Rashmi’s mindset as well as her career. Rashmi refuses to give in to this pressure and decides to challenge every obstacle.

Rashmi Rocket is the story of a young girl who has had the natural talent of being a fast runner since childhood. She grows up to become a successful, professional athlete. The film is based on the ‘struggles of several female athletes.’

There is a major twist in the tale, however, something the country has already seen in two well-known female athletes of the country. Rashmi was doing well, till her life changes drastically when she is asked to undergo a gender test.

This results in constant media glare, all negative, and affects Rashmi’s mindset as well as her career. Rashmi refuses to give in to this pressure and decides to challenge every obstacle. She races to the doors of justice.

As the trailer says, it is the story of Rashmi’s journey from a tiny village to athletic contests, courtrooms and beyond. The film is “inspired by the struggle of several female athletes.”

It is to address the archaic gender testing that is performed on female athletes. Rashmi gets support from her family even as the world refuses to accept that a female can be in such great form with a solid physique.

The first professional female athlete who comes to mind from Rashmi’s story is sprinter Dutee Chand, who won two silver medals at the 2018 Asian Games. In 2014, however, she was banned from competing as a female because of high testosterone levels in her body.

Dutee had gone through several rounds of court cases before she was allowed to participate again. In the movie, Abhishek Banerjee plays the lawyer who represents Taapsee in court as she fights the outdated gender tests female athletes are subjected to.

In reality, though, such cases do not go to civil or even criminal courts of the country. Courts of India do not have sway over international appearances of an athlete and the highest court in this regard is the CAS, or the Lausanne, Switzerland-based Court of Arbitration for Sport (CAS). That, probably, is a glaring factual error in the film.

Another athlete in point has been Santhi Soudarajan. She, too, had to undergo this shameful gender test – the International Olympic Committee has since done away with this practice – and her ambitions and her athletics career came to an end. For Santhi itw as probably worse, having come from a very poor, Dalit family in Kathakurichi in Tamil Nadu’s Pudukkottai district. Her father eked out a living in conditions that starkly resembled that of a bonded labourer. She was even working in a brick kiln.

Rashmi, more akin to the Dutee case, however, got support of loved ones and filed a petition in the high court for human rights violation. After hearing all the arguments the court orders to free Rashmi from all the restrictions. That is not how it happens in the field of sport, especially international sport, but maybe we can accept this for the sake of artistic freedom and for lack of a decent budget.

In the movie Rashmi returns to athletics sharing her victory with all those girls who have lost their rights due to some conspiracy.

After the release of the trailer, many stated that Rashmi Rocket reminded them of Dutee Chand’s real story in 2014. In fact, the film is also set in the same year. Taapsee, however, says it’s not a biopic. She shared that they deliberately didn’t make it about one person’s journey. “We assembled a lot of events and put them together in one storyline.

However, there is a gender bias in the film itself. While Dutee’s lawyer was (and is) a lady, the film presents a man as the lawyer, probably the saviour’s role. Cheap and shameful patriarchy has its presence here as well.

The principal photography began in November 2020 in Pune. The film was wrapped up on 26 January 2021 in Gujarat.