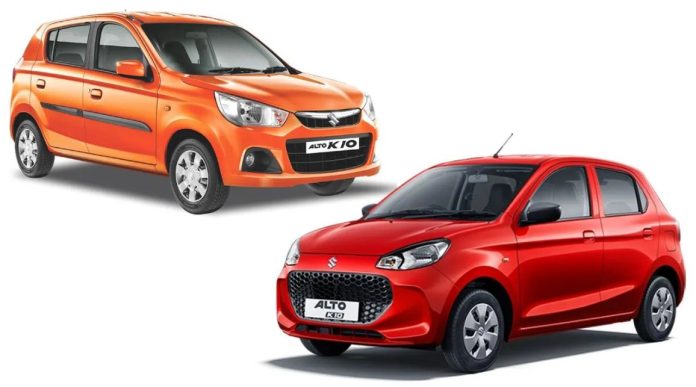 The Alto has been India’s Janta Car for ages. It has seen some changes, but the efficacy and the styling of the car have changed little since it had been launched. Also, the safety features had remained in low key. Maruti Suzuki has addressed quite a few of the problems with its new – or re-launch – of the veritable Alto.

On August 19, India’s top carmaker Maruti Suzuki launched Alto K10 in its new avatar. The new generation version will be sold alongside the entry-level Alto 800. The 2022 Alto K10 is getting a complete redesign and will be packed with an all-new BS6 engine option.

The Alto K10 continues to form the core of Maruti Suzuki product strategy and as such, could be the most crucial launch from the company this year. This is saying a lot considering the Grand Vitara is also scheduled for its debut ahead of the festive period.

The Evolution
The first-generation of Alto was launched in 2000 as Alto 800 and was seen as the model that would replace the ageing Maruti 800. While subsequent years saw the model being given some updates, the major change came about in 2010 with the Alto K10. The second-generation Alto was launched in 2014 while subsequent years saw the debut of automatic transmission and even a CNG option in the model.

Based on the fifth generation Heartect platform, the new Alto K10 gets a completely restyled grille that sports a black mesh. The shape of the grille resembles the old model. The headlamps, front bumper and bonnet too appear considerably different looking. The side profile and rear too come with a revised appearance. It looks a bit like the Maruti Suzuki Celerio.

The customers can avail of two customisation packages for the new Alto K10 – Impacto and Glinto. The hatchback runs on 13- inch wheels. It is available in six different exterior colour options.

Features
Price: The new car has been positioned above the Alto 800 and is priced in the range of Rs 3.99-5.83 lakh, ex-showroom.
K10 variants: Maruti will offer the new Alto K10 in six variants called the STD (O), LXi, VXI and VXI+. The top two variants will be offered with both manual and automatic gearbox choices.

Safety
All variants of the Alto K10 come with dual airbags, ABS, and EBD, as well as rear parking sensors and headlamp levelling. It is good to see most of the safety features being offered across all variants, although higher-spec variants get an impact-sensing door-unlock feature.

Infotainment
Maruti Suzuki has added a lot of crucial tech-related features to the new Alto K10. It comes with a 7-inch touchscreen Smartplay Studio infotainment system, which supports Apple CarPlay and Android Auto, along with AUX, USB, and Bluetooth connectivity.

Engine
Under the hood, the next-gen Maruti Alto K10 is powered by a 67hp, 1.0 litre K10C petrol engine, which produces 65.7 bhp of power and a max torque of 89 Nm. The engine will be paired with a 5-speed manual transmission and an AMT. Maruti may offer a CNG variant. The new car is available in six colours — Solid White, Speedy Blue, Silky White, Granite Grey, Sizzling Red and Earth Gold.  It is expected to rival the Renault Kwid.

CNG option soon
Currently, the new hatchback is only available with petrol engines, but the company confirmed that its CNG variant will go on sale soon.
Additionally, CNG will also be available in top variants of the Alto K10.  With a five-speed manual transmission, it will have the same 56.7PS, 1-litre petrol-CNG engine as the Celerio.

Design
In comparison to the model it replaces, the updated Alto K10 will come out as a whole new car with a different exterior styling. The revamped car will have a traditional glasshouse and a prominent shoulder line. It will also get lift-up door handles like Maruti’s Celerio.

The front fascia of the new Alto K10 will get a hexagonal grille, flanked by sweptback headlamps. Although the rear end appears to be like the Celerio at first glance, the two cars are different in tail-lights, rear hatch and bumpers. The new Alto K10 is expected to get alloy wheels as a dealer-level accessory.

Interiors
Inside, the new Maruti car will get a blacked themed clean and upright dashboard design and a touchscreen infotainment system. Window switches will be on the dashboard, but the car may not have steering-mounted controls. The car is likely to have features such as Android Auto, ABS, dual front airbags, Apple CarPlay, and ESP.

Exterior
In terms of design, the new Alto K10 is a complete departure from its predecessor and looks more in line with the current Celerio. It is now based on Maruti’s Heartect platform, which underpins a whole range of models from the Celerio to the Ertiga, and has thus sufficiently grown in size as well. Measuring 3,530mm in length, 1,490mm in width and 1,520mm in height, the new Alto K10 is 85mm longer and 45mm taller than the Alto 800. The wheelbase, at 2,380mm, has also grown by 20mm. The width, however, remains the same as the Alto 800.

The overall shape of the new Alto K10 is now more rounded and a little more upright than before. Up front, it gets wide sweptback halogen headlamps and a large hexagonal grille with a mesh-pattern air intake, both of which combined look like a laughing emoji. The front bumper features a few angular creases at the sides and a contrasting black trim element at the front, although there are no provisions for fog lamps or LED DRLs.

Old vs New
The Maruti Suzuki Alto K10 was discontinued in India because of the implementation of the BS6 emission norms. However, the car is now back in an all-new avatar, with a completely revamped design, a new engine, and a new platform. So, let’s take a look at just how different the new model is compared to the old one.

Styling
The 2022 Alto K10 features completely new styling when compared to the old version. While the huge honeycomb grille-dominated front looks quite funky, the Alto K10 looks very similar to the Celerio from the back, which was updated last year. Inside, the new Alto K10 again borrows some of its switchgear from the Celerio but dons an all-black colour theme. The old K10, on the other hand, featured a two-tone interior.

Dimensions & Capacity
The 2022 Maruti Suzuki Alto K10 (now in its third generation) is based on the brand’s latest Heartect platform, which pretty much underpins all the new Maruti models. As a result, the car has become slightly bigger than the old K10. For example, the new Alto K10 has a 20mm longer wheelbase and is 45mm taller too. Interestingly, the overall length of the new K10 has gone down by 15mm, but the overall width, at 1,490mm, remains unchanged.

The new car also offers a larger boot (214 litres) compared to the old version’s 177-litre boot; however, it now comes with a smaller 27-litre fuel tank, compared to the old car’s 35-litre unit. The new model will also be a little easier to manage in the city, thanks to a reduced 4.5m turning circle (against 4.6m of the old car). To increase ride comfort, the new Alto K10 comes with 145/80-section tyres, which are slightly narrower but fatter than the old K10’s tyres (155/65-section). At 13-inch, the wheel size remains the same.