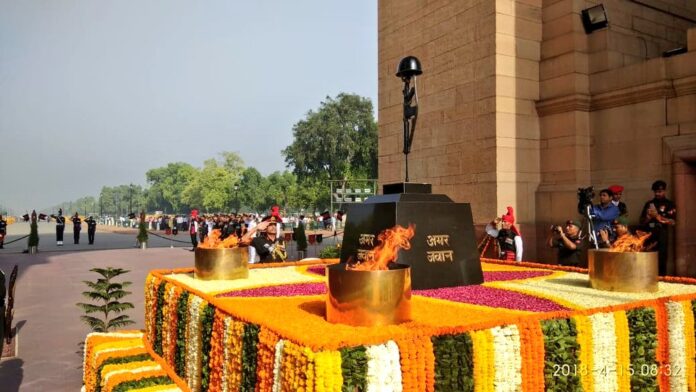 With the decision of the government, the eternal flame of Amar Jawan Jyoti, lit in 1972 at the India Gate lawns, has been extinguished. It burned for 50 years. The fire has been kept burning with a torch, and a part of the torch will now be merged with the National War Memorial’s torch ahead of Republic Day.

The decision for the merger of the flames was taken, because it was becoming difficult to maintain both the torches burning, that too, at close proximity of each other. The other deciding factor was that the National War Memorial is the one which represents independent India and eternal soldiers.

A government statement said: “The flame of the Amar Jawan Jyoti is not being extinguished. It is being merged with the flame at the National War Memorial. It was an odd thing to see that the flame at Amar Jawan Jyoti paid homage to the martyrs of the 1971 and other wars but none of their names are present there.”

The Amar Jawan Jyoti was constructed as a memorial for Indian soldiers who were killed in action in the 1971 Indo-Pak war. India’s victory at the end of this war led to the creation of Bangladesh.

The names inscribed on the India Gate are those who fought for the British in the World War-I and Anglo Afghan War, said the government, describing it as “a symbol of our colonial past.”