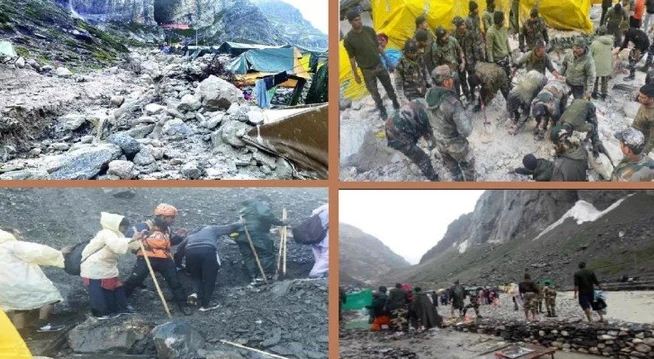 A sudden cloudburst on the night of July 8 near the Amarnath cave washed away several pilgrims, kitchens, tents and other facilities. The cloudburst was so sudden and intense that it led to strong mudslides that whipped away all facilities, leaving 16 dead (as of last count) a large number of pilgrims missing and nearly 15,000 stranded.

The Amarnath pilgrimage is a difficult one, but not in the scale of any special climb or not even a high altitude trek. However, two important things have to be kept in mind. First, this is a very popular pilgrimage and that this cave in Jammu and Kashmir is situated within a very sensitive ecosystem that can hardly handle such huge influx of pilgrims. With trees and its roots being sparse, there is always the danger of landslides.

Secondly, the area is prone to landslides. And when a cloudburst happens, there is hardly any system in place that can handle the resulting massive land and mudslides. It, therefore, becomes essential that the government control the number of pilgrims and also take adequate precaution if weather reports predict inclement weather, especially of rain.

The scenario was horrific, as per visuals (photos and videos) that emerged: tents were washed away by the strong current of water. According to witnesses the cloudburst hit the cave area at around 5.30 pm after heavy rains.

Nearly 15,000 stranded pilgrims have been moved to the lower base camp of Panjtarni. Officials have said that about 40 people are still missing after the massive flash flood swept away hundreds. While going to press, the rescue efforts were still on, but people are losing hope of finding the rest of the missing.

The Amarnath Yatra resumed on July 11 after it was halted for two days owing to the cloudburst tragedy. In order to avoid a similar situation, the army has prepared an alternate route towards the cave, bypassing the water channel that caused havoc after the cloudburst.

Manoj Sinha, Lieutenant Governor (LG) of Jammu and Kashmir visited a base camp in Pahalgam and met pilgrims on July 10. The LG later said: “The security personnel and administration have carried out an efficient rescue operation. We pay condolences to those who lost their lives. Efforts are underway to resume the yatra along with repairing the path. Pilgrims should come, we will provide them with all facilities.”

An Indian Air Force (IAF) officer said weather was the biggest challenge in the rescue and relief operations in the aftermath of the incident. “…The valley (leading to the cave shrine) was narrow and due to clouding, choppers were finding it difficult to enter.

“There are some minimum parameters like visibility that we need to observe before flying….even on 10th (July), we were not able to operate for more than half the day till 2 pm due to weather,” he said.

The Air Force officer said that the main air operation started on July 9 around 9 am. “The assets we used were four MI-17 V5 from the base unit here and four Cheetals, which augmented from the unit at Leh, two fixed wing assets which brought in manpower and assets from other parts of the country.”

Cloudburst
A cloudburst is an extreme amount of precipitation in a short period of time, sometimes accompanied by hail and thunder, which is capable of creating flood conditions. Cloudbursts can quickly dump large amounts of water, e.g. 25 mm of precipitation corresponds to 25,000 metric tons per square kilometre.