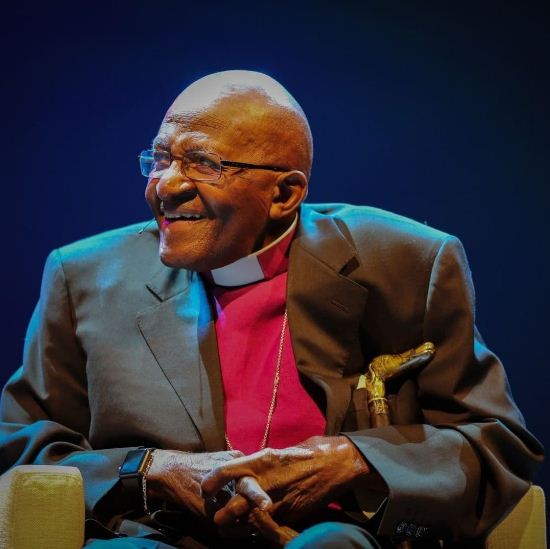 South South African Archbishop Desmond Tutu, a lifelong anti apartheid activist, has died at the age of 90. Tutu, the last surviving South African laureate of the Nobel Peace Prize, was diagnosed with prostate cancer in the late 1990s and in recent years he was hospitalized on several occasions to treat infections associated with his cancer treatment.

“Ultimately, at the age of 90, he died peacefully at the Oasis Frail Care Centre in Cape Town this morning,” Dr Ramphela Mamphele, acting chairperson of the Archbishop Desmond Tutu IP Trust and Co-ordinator of the Office of the Archbishop, said in a statement on behalf of the Tutu family.

In 1984 Tutu won the Nobel Peace Prize for his non-violent opposition to apartheid.

A decade later, he witnessed the ends of that regime and he chaired a Truth and Reconciliation Commission, set up to unearth atrocities committed during those dark days.

Indian-origin Leena Nair is new CEO of Chanel
Another Indian origin person is now head of a multinational. This time, the company is one of the top fashion houses of the world, Chanel. This French giant has announced that British Indian Leena Nair will be their new global CEO. The India born Nair will join the fashion house Chanel by the end of January next year and will be based in London.

Nair said she was happy and honoured to be appointed CEO of such an admired and iconic company. She is also the youngest CEO of Chanel.

Chanel was founded in the year 1910 by fashion legend Gabrielle “Coco” Chanel in Paris and then grew to be an outstanding embodiment of French chic. The luxurious fashion house Chanel is known across the world for its quilted handbags, No. 5 perfume and tweed suits.

Nair, 52, was born in Kolhapur, Maharashtra and comes in from Unilever, where she was appointed chief human resources officer and member of the Unilever Leadership Executive in 2016.

Chanel is owned by Alain Wertheimer who is a 73 years old French billionaire. Alan along with his brother Gerard Wertheimer became the two owners of the French luxury fashion house in 2016. Alan was working as the company’s CEO temporarily as the post remained vacant in search of a suitable person but now he will shift to the role of global executive chairman after the appointment of Nair.

Sweden has its first female Prime Minister
Magdalena Andersson has been elected again as head of Government of Sweden. A week before that she was Sweden’s first woman Prime Minister for a few hours before resigning, because a budget defeat made a coalition partner quit. This time her position has been cemented. Andersson was Finance Minister before becoming Prime Minister.

She has said that she had three priorities welfare, climate and combating violence. Sweden has seen a rise in organized crime activity in the past few years and several gang-related shootings have occurred in the three main cities, Stockholm, Goteborg and Malmo.

Royal Gold Medal for architect Balkrishna Doshi
The British Queen’s Royal Gold Medal 2022, regarded as one of the world’s highest honours for architecture a lifetime achievement award that has been personally approved by Queen Elizebth II has gone to India’s nonagenarian architect Balkrishna Doshi. Doshi, who has already received the prestigious Pritzker Architecture Prize and the Padma Shri and Padma Bhushan, said: “I am pleasantly surprised and deeply humbled to receive the Royal Gold Medal from the Queen of England. What a great honour.”

Doshi founded his own practice, Vastushilpa, in 1956 with two architects.

Today Vastushilpa is a multi-disciplinary practice with partners spanning three generations and has 60 employees. The practice invites dialogue and its philosophy of pro-active participation even applies to their office space which has an open door, inviting passers-by to drop in.

In 2018, she was appointed the Chief Economist of the IMF.

The strange Katrina-Vicky  wedding
Actors Vicky Kaushal and Katrina Kaif finally tied the knot in Rajasthan’s Six Senses Fort Barwara resort on December 9. This was surely a big ticket Bollywood marriage, but what caught the fancy of fans was the intense privacy associated with it. There were no photos, NDA clauses to be signed by invitees to compulsory RT-PCR test for unvaccinated attendees.

We can assume the ceremony was spectacular, but secretive, so not many details have emerged. That makes it even more attractive, one might say. Vicky Kaushal and Katrina Kaif are basking in the success of Sardar Udham and Sooryavanshi, respectively.