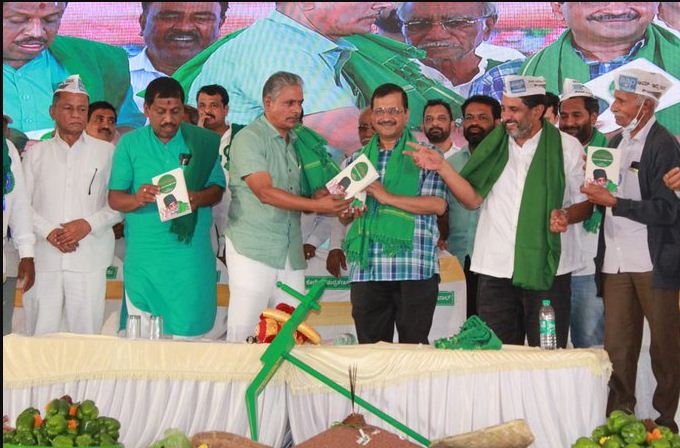 Following the Punjab success, the Aam Aadmi Party (AAP) has grown ambitious and now wants Karnataka in its fold. It is another matter that the AAP’s base in this southern state is not up to scratch – this is not a state in any way comparable to Delhi or Punjab – and that there is a long way to go before even realising the party’s potential here. But, Indian politics, surprises do happen.

Recently, at a rally at the National College grounds, while kicking off his party’s campaign Arvind Kejriwal, the Delhi Chief Minister said confidently that his party will form its third government in this southern.

He sought the support of farmer organisations to topple the “40% government”, a reference to the corruption allegations hurled at the BJP government by the Karnataka State Contractors’ Association. “We have to close the 20% and 40% commission accounts of these governments,” Kejriwal said. he also said that a corruption-free government could offer several services for free to the people.

He again brought in the freebies theory that had great impact in Delhi and in Punjab. He said: “Despite economic hardships faced in the last few years, five things are provided free for the people of Delhi – education, healthcare, power, water and transportation for women. How did we do it? It is because we are honest. We save money.”

This has continued in Delhi, and whatever its effect on the state exchequer, it held sway in corruption-ridden Punjab. Corruption in Karnataka, it is well known, has almost been institutionalised. The state is as rich in minerals as in flamboyant cheats. It has great institutions like Infosys, as well as mining mafias that extend to the top of the power corridors. This is also a known fact, and the people are fed up.

At the same time, the “honest” tag that the AAP bears has been generally accepted around the country. And in case there is an anti-incumbency wave, the AAP has a good chance of at least providing a strong opposition if not the government.

During his speech Kejriwal talked about the Lakhimpur Kheri violence, as well as about the attack on his official residence at New Delhi as incidents that “hurt him” over the last few days. “These goons then joined a party. All goons go to one party,” he said, to which the audience responded saying ‘BJP’.

Kejriwal did not pull any punches, he said that the BJP, “welcomed rapists and goons into their fold. The AAP, however, is a party of gentlemen, patriots and honest people.”

He also took up the case of almost simultaneous riots across the country saying people just wanted to live in peace. “If you want riots, vote for them. If you want schools, vote for me.”

This practical approach has seen Kejriwal and his party’s popularity soar. It was a great plank for him in Punjab. In this he was supported by farmer leader Kodihalli Chandrashekar, who joined AAP during the rally. He had earlier announced that the Karnataka Rajya Raitha Sangha would strive to ensure that AAP emerged victorious in the next election. Earlier last month, former Bengaluru Police Commissioner Bhaskar Rao also joined AAP.

This will be a great test. The elections are scheduled around May 2023 and there is time yet for Kejriwal to spread his wings. If he can bring about good change in Punjab in the meantime, he will be noticed.

However, the first real tests for Kejriwal will be in Gujarat and Himachal Pradesh, where elections are scheduled for December this year. The AAP has already started making inroads in Gujarat and there seems to be a sizeable support base for Kejriwal & Co there. Himachal, though remains a bit untouched. These early manoeuvres will be watched carefully in Karnataka.

The very fact that Kejriwal talks more about his work and less about religion and caste and creed, brings peace loving people, people who want to do a hard day’s work and reap decent benefits, crawling out of the woodwork. It is possible that the people are fed up of rising prices, of the spate of religion-based violence and divisive politics that is tearing apart India. It is important that people want to concentrate on family first and on religion and other intangibles later. If there is no food on the table, if your children cannot go to school, then what purpose would religion serve?

Congress is a dead horse, and it will again be rejected in Karnataka. That is a party that will never be able to shake off its inertia and infighting. The Congress’ chance of coming back to power in Karnataka is faint. That allows Kejriwal and AAP to elbow in.

We will, however, wait for Gujarat and Huimachal to make out decision on this.