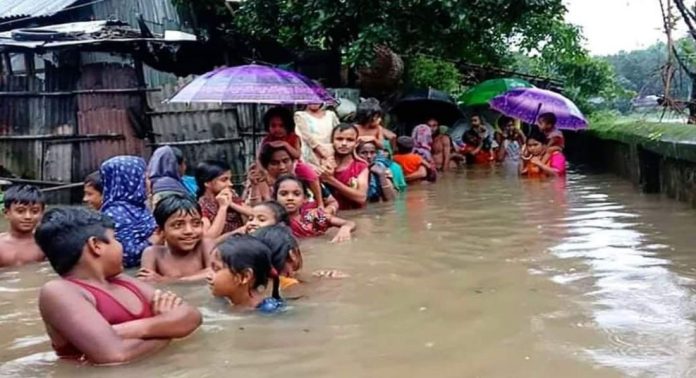 While the rest of the country was busy with the politics of religion and over some comments by a party’s spokesperson that had the Muslim population up in arms, way over to the east, in Assam, floods ravaged the land brutally. It was sad that the media concentrated on issued far removed from the daily issues and problems of the people and cared so little for anything that does not involve Delhi and ruling parties thereof. Of course, there is religion as well.

Such a situation had happened in Chennai too, when the floods had wreaked havoc in the state. National news channels and newspapers were busy reporting silly issues from Delhi and it was only three days into the disaster that anybody cared to look south. It is as if there is no India south of the Vidhayas.

Same is the situation with Assam now. The situation is horrible, with all major rivers in spate. Threatened are over 47 lakh people and some lives were also lost and more are expected to die. Of course there have been talks between Home Minister Amit Shah and state Chief Minister Himanta Biswa Sarma and the necessary relief process has been arranged, but the reaction could have been earlier. Things could have been better had the media even thought of looking beyond the borders of Delhi.

It is sad that while the media does not think twice about sending several reporters to way off Ukraine to cover a war that should not concern India, but does not have the wherewithal to cover disasters in India itself.

The state is being rammed by the floods and the number of people affected is 47,72,140. They are spread across 32 of the 36 districts. Deaths have come from landslides and such landslides have happened throughout the year. Figures are being released by the Assam State Disaster Management Authority (ASDMA).

What is it about Assam and floods?
According to the Water Resources department of the government of Assam, the state, with its vast network of rivers “is prone to natural disasters like flood and erosion which has a negative impact on overall development of the state. The Brahmaputra and Barak River with more than 50 tributaries feeding them, causes the flood devastation in the monsoon period each year. The flood and erosion problem of Assam is singularly different from other states so far as extent and duration of flooding and magnitude of erosion is concerned and is probably the most acute and unique in the country.

Basically want the official document says is that Assam is prone to floods. Hence the arrangements will have to be at that level and money has to be spent to let this not happen year after year. This has not happened. As a result, most of the rural areas of the state, and as detailed in the official dossier, suffer immensely.

These are modest estimates where the actual damage may have been in many multiples.

Here is a table that shows the damage to crops etc. these are official figures.

That is not the end. There are flash floods too. Here is what the dossier says:

“The flood problem of the state is further aggravated due to flash floods by the rivers flowing down from neighbouring states like Arunachal Pradesh and Meghalaya. During the year 2004 and 2014 the south bank tributaries of Brahmaputra in lower Assam, experienced flash floods of high magnitude due to cloud burst in the catchment areas in Meghalaya. During the month of August, 2011, due to cloud burst in the catchment area of Arunachal Pradesh the river Gainadi and Jiadhal also experienced flash floods of very high magnitude. These flash floods caused large-scale devastation in vast areas including losses of human lives.”

The state, quite like Kerala, is flood prone. Hence development work has to be undertaken with this in mind. Also, it is imperative that national media pay more heed to happenings around the country and this is the only way a national temper may be created. It is essential.