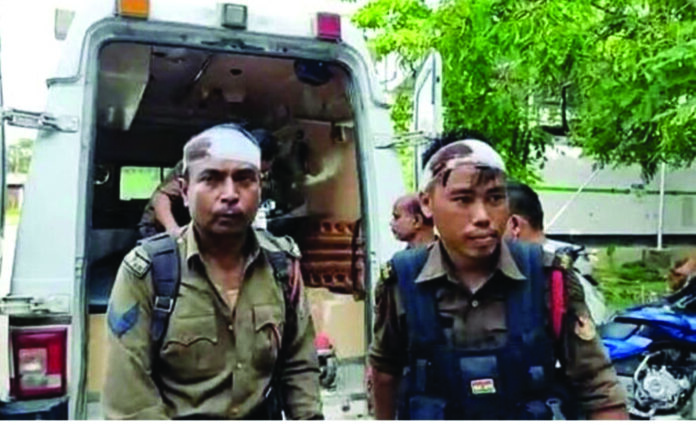 The routine story of extra-judicial killings of alleged accused, or even gangsters, gets buried on the inside pages of a newspaper. But not this; this was Page 1. And top billing at Prime Time. It’s not every day that two states of India, which is a union of states, remember, end up in such a conflict that 5 policemen are gunned down by the other state’s police. And no, this is not involving Karnataka and Tamil Nadu, mind you!

Though the killing of 5 men from the Assam Police by Mizoram Police comes as a shock to most of us and to the TV studios, the conflict has been raging since Independence though some will date it to the late 1800s, when the British brought the Lushai Hills under their control.

Mizoram says the immediate provocation is that Assam Police, along with its state authorities, overran a police post in Kolasib district and tried to set up infrastructure. In turn, Assam Chief Minister Himanta Biswa Sarma tweeted that Assam policemen were killed by light machine gun fire and made it a point to engage on Twitter with his Mizoram counterpart Zoramthanga, who called upon Home Minister Amit Shah to bring some peace and respite. Sarma later tried to link both the cow trade and drug running and pointed to “non-state” actors behind the killing.

Now, the versions begin to assume different tones with paid social media trolls, those who support Assam, those who support Mizoram and the diaspora from both sides. Biff-biff-boom-boom. But now after the bloodbath of July 26, it is the siege. A blockade, which is a routine affair in the Northeast, is on in Assam with people enraged by the killing of policemen, blocking trucks from entering Mizoram. Zoramthanga has again called on Amit Shah to rescue Mizoram.

It is a distressing time for the region. Sarma himself had collated and created the North East Democratic Alliance which has ensured the BJP became a force to reckon with in the Northeast. The Mizo National Front, which is the party of Zoramthanga, had started out in the early 60s as a secessionist movement at first, and then laid down arms and joined the democratic mainstream.

Mizoram, which used to be a district of Assam as Lushai Hills district along the border with Bangladesh, was carved out as a Union Territory in 1972 and became a state in 1986. The 165-km border between the two states runs through these districts Hailakandi, Karimganj and Cachar districts in Assam and Aizawl, Mamit and Kolasib in Mizoram.

Mizos claim parts of Cachar while Assam claims parts of both Mamit and Kolasib. Incursions and excursions are a dime a dozen on both sides. This must remind the reader of the other big Line that India has as one of its international borders which also has these multiple claims, some ours and others of the region’s Hegemonic Other.

But given the “tyranny of distance”, the cocky-yet-flimsy excuse put forward by a veteran TV journalist explaining why TV studios lag in covering things in the Northeast which should be newsworthy, the media eye had been shut on Assam’s long history of such differences with its neighbours.

Assam is the oldest state in the region, and most of the Northeast, as we know it today, was carved from it barring Sikkim and Manipur. Broadly, the dominance of Assam in the Northeast is similar to the dominance enjoyed by the UP wala and the Punjabi in the north and the Tamilian in the south.

Sarma, like Zoramthanga, or, for that matter, the chief ministers of Nagaland, Meghalaya and Arunachal Pradesh, has this legacy to live with. Armed with the zeal and emotional power of linguistic sub-nationalism, many here are adept at switching on the nuclear warheads of hate but have little or no idea of what might happen next.

Patricia Mukhim, the seasoned Shillong Times editor, in a column for The Times of India speaks of the conflict as having arisen from the differences between actual boundaries and the cultural boundaries inhabited by the people that are now in other geographical units. Borders come and go but people of a tribe and of clans like in the Northeast and the rest of India continue to treat the part that has been severed and amalgamated into another state still as a living, breathing whole.

This is not a problem in the Northeast alone. It exists in the Maharashtra-Karnataka border wars and in the attempts to justify the creation of a KonguNadu union territory in west Tamil Nadu and also in the stellar one that has left Congress poorer by 42 Lok Sabha seats – the division of the erstwhile Andhra Pradesh into Telangana and Andhra Pradesh.

While many columnists and much social media have been taking potshots that the conflict happened very soon after Amit Shah met chief ministers of the states in the region, it’s the oversimplification that is criminal. The gaze of the babu has been continued by TV channels, and thus the people of the country see this as a fratricidal war. But the over-simplification of the ties between different tribes into a version of brotherhood-sisterhood of the region’s eight states (Assam, Mizoram, Manipur, Nagaland, Tripura, Sikkim, Meghalaya and Arunachal Pradesh) is where the fault lies.

The larger question in the border skirmish and the 100 plus possibilities that can break out in the land of claims and counter-claims is the crucible of nationhood, something a country like India had not thought too deeply about when it struck midnight on August 15, 1947.