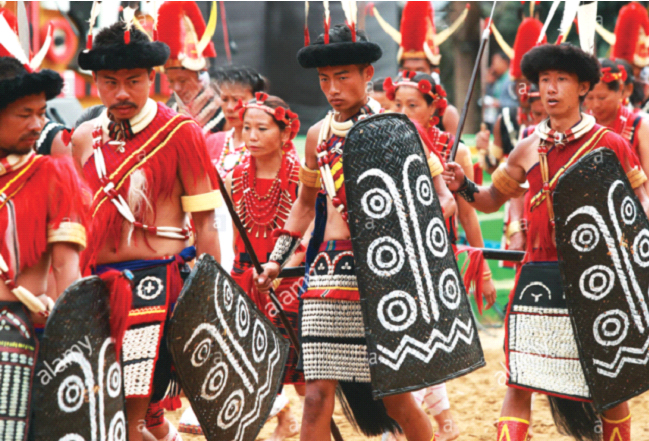 Nagaland is a complex, Goridan knot. The people of Nagaland understand this, so does the government of the country. Accords that have been signed in the past have been contested tooth and nail by the state governor and the several militant groups and, as a result, the Armed Forces Special Powers Act (AFSPSA) continues to be in vogue, re-imposed every six months, much to the consternation of the people.Understanding Nagaland is difficult, but understanding the mindsets of the people there is not. A state, termed ‘disturbed area’ is actually by and large peaceful now, and this peace is what the common people want. “Let it be…” is the refrain.

So, what is happening in that state? The Naga problem is mired in many controversies. Of the 16 major tribes that have sway over what goes on in Nagaland, the Nagas are in majority, according to the last census. The system of governance is a little different from other places, this being a so-called ‘disturbed area’, supposedly home to insurgent groups. The Governor of Nagaland, RN Ravi, remains the titular head as governors are in other states that are not Union Territories, but in Nagaland, law and order is not a subject under the state government, but is controlled by the governor, under President and the Union government. this is because of the ‘disturbed area’ tag.

The general methodology is that the various militant groups continue their parleys with RN Ravi every now and then after the signing of the Ceasefire accord in 1997. Recently it was decided to extend the Ceasefire agreement including three new parties, “…for a further period of one year with effect from April 28, 2021 to April 27, 2022 with NSCN/NK and NSCN/R and from April 18, 2021 to April 17, 2022 with NSCN/K-Khango,” a statement from Home Ministry said.

Three new outfits – the NSCN/NK, NSCN/R, NSCN/K-Khango – are breakaway factions of dominant groups NSCN-IM and NSCN-K. They were also included in the agreement.

Although the NSCN-K had signed a ceasefire agreement with the Centre in 2001, but unilaterally abrogated it in 2015 when the then chairman of the group, S S Khaplang, was still alive. In December 2020, the NSCN-K, led by militant Niki Sumi, had announced a ceasefire and said that the outfit has contacted the central government for dialogue. This inclusion has said to have angered the NSCN (IM) the main militant group, which said the Home Ministry was bringing about more divisions in the fold.

Although the law of the land is still vested in tribal bodies, which includes the NNPGS (the Naga National Political Groups) are included in the dialogue process. The state government, led by Chief Minister Neiphio Rio of the Democratic Alliance of Nagaland, is a state level coalition of political parties in Nagaland, including the Bharatiya Janata Party (BJP). It was formed in 2003 after Nagaland Legislative Assembly election with Naga People’s Front (NPF) and BJP. The alliance is in power in Nagaland since 2003. The Nationalist Democratic Progressive Party (NDPP) holds the maximum seats. Strangely, the State government is not inclusive in the talks.

The nature of complexity

The problems are complex because the militants’ demand of a separate constitution (each militant group is said to have its own constitution). The other vexed issue is the demand by the groups for Greater Nagaland which includes parts of Assam, Arunachal Pradesh, and Manipur in India. The International part of the ‘territory’ includes parts of Myanmar as well. Currently, the Nagaland state covers an area 16,527 square kilometers, while the concept of Greater Nagaland comprises of 1,20,000 square kilometers with the majority of the area demanded is in Ukhrul and Chandel districts of Manipur where the Tanghkul Nagas are said to reside.

This level of complexity requires a patient and soft handed approach. This leaves the parties wanting for more, but end up with less. Sure the situation needs a patient approach, but as the people of Nagaland slowly merge with the mainland ethos, there is a need for more inclusivity and more understanding.

A very confidential Framework Agreement of August 3, 2015, termed as “historic” by Prime minister Narendra Modi, was signed after over 80 rounds of talks between the government and various stakeholders, but the exact details weren’t revealed. It only “recognised the unique history, culture and position of the Nagas and their sentiments and aspirations. The NSCN understood and appreciated the Indian political system and governance”.

In August 2020, National Socialist Council of Nagaland released copies of the confidential Framework Agreement and insisted on changing the interlocutor-Governor R. N. Ravi,  after a of chain of events that emanated from this demand. In October 2020, the current chief of NSCN-IM Thuingaleng Muivah expressed strong reservations against moving forward with the agreement in a 55-minute long interview given to journalist Karan Thapar. According to a report by The Hindu, there was discomfort within sections of Nagaland after the government decided to bring other Naga armed groups on board under the aegis of the Naga National Political Groups (NNGP). The report states that certain sections in Nagaland suspect that this was done by the government to exploit existing divisions between the Nagas. There are complaints that even after six years since the Framework Agreement, it has not been implemented.

In conclusion, maybe the famous statement of Winston Churchill ‘Meeting jaw to jaw is better than war,’ till a solution is inked out by the various parties involved.