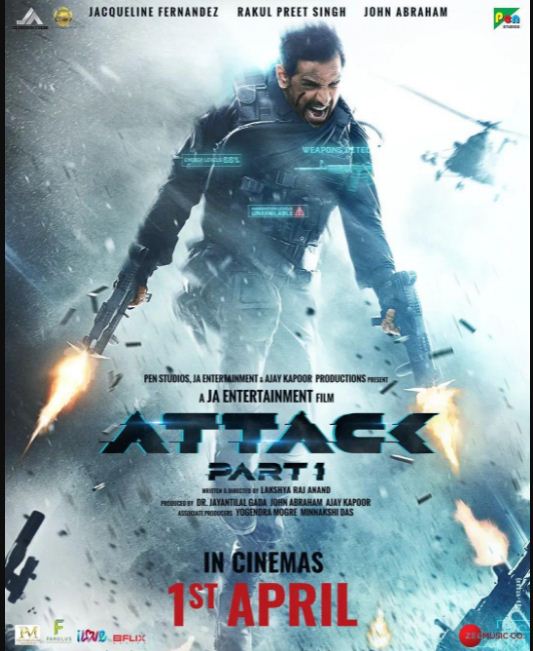 Recently, a number of enjoyable and very well made, good Bollywood movies with excellent story lines, many in line of true incidents, have come to the screens and through OTT platforms. Whatever the hype, those were enjoyable, because of an inherent amount of truth in them. Many thought Bollywood was changing.

Bollywood, however, had to breathe, and had to be really Bollywood, bereft of brains, completely out of ideas, copying sections of plots from high budget Hollywood movies and them completely destroying them. So it made a movie called ‘Attack’. As if that was not enough, it borrows plots from successful Bollywood films as well.

Read on for the ‘niceties’.
Attack is a Bollywood action-drama, written and directed by debutant Lakshya Raj Anand. The movie casts John Abraham, Jacqueline Fernandez, and Rakul Preet Singh in the lead roles it all starts with a surgical strike in Pakistan. Of course, this is led by Arjun Shergill (John Abraham). From there the team captures a Lashkar leader, Hamid Gul. The story moves forward a few months. Ayesha (Jacqueline) comes into Arjun’s life. Both are living happily when suddenly one day there is a big terrorist attack on Delhi airport. Arjuna, who was injured in this attack, is paralyzed from throat down.

So he is living a sad life with his mother. But that’s not story enough, so Bollywood brings in tech, a bad copy of the West. The army remember Arjun again. The army wants to prepare a super soldier to deal with the new leader of Lashkar, Umar Gul, for which they have chosen Arjun. What fun. Scientist (Rakul Preet) develops a chip that can be fitted in a human brain. And we thought chips these days are developed by a team of researchers.

How a metallic chip integrates into an organic host is not clear, but through it any command can be given to a human being through an intelligent robotic assistant. So, this chip is fitted in Arjun’s brain. Soon Arjun gets ready for the next mission. But in the meantime a big terrorist attack takes place on Parliament.

Se where this is going? Nowhere.

There all the ministers including the Prime Minister are imprisoned and some demands are placed before the government. Now the government fulfils the demand of terrorists or will Super Soldier Arjun create some Chakravyuh.

Sorry, the movie even steals from the Mahabharata.

In the movie you will see how Arjun saves the country from terrorists with the help of this new technology.
The rest of the plot revolves around how this one-of-its-kind prototype sets out on a mission for a larger cause.

AT THE BOX OFFICE

Production
Principal photography began in January 2020. Production was put on hold in March 2020 due to Covid-19 pandemic. The shooting resumed in February 2021.

Budget
It is estimated that the film will cost around Rs 55 crores to make. In a recent interview, John revealed that 30 percent of the film’s budget is spent on visual effects, translating into approximately 15 crores spent on the budget. The film’s total cost, including printing and advertising, is about 55 crores.

Messi scores one, lends a hand at another and Alvarez completes Croatia rout to reach...