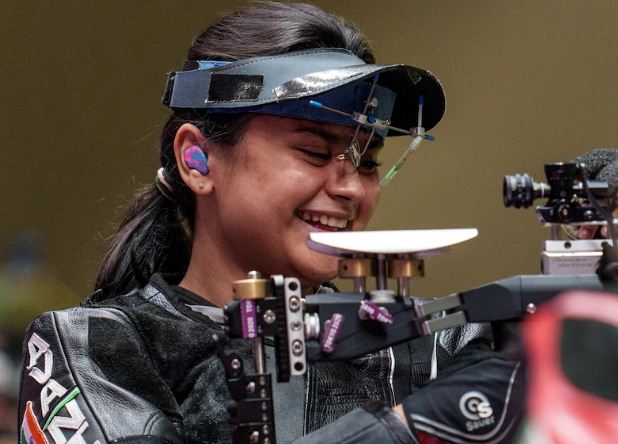 Tokyo Paralympics champion Avani Lekhara has done it again. Following her sterling performance in Tokyo, she has now won gold at the Para Shooting World Cup as well. To make it even better, she did this with a world record score of 250.6 in the women’s 10m air rifle standing (SH1). Her feat was recorded in Chateauroux, France.

In doing so the 20-year-old broke her own world record of 249.6 to secure her a spot at the 2024 Paris Paralympics. Poland’s Emilia Babska bagged the silver medal with a total of 247.6, while the bronze went to Anna Normann of Sweden with 225.6. SH1 category is for athletes with lower limb impairment for competition in rifle events.

“Proud to bring home the gold in the R2 10M Air Rifle SH1 event with a WR score & India’s 1st Paris2024 Quota, at the Chateauroux2022. My 1st Int. event since the @paralympics. A big thank you to everyone who has supported me!” she tweeted.

India’s distance star Hari Chand dies at 69
One of India’s finest distance runners, Hari Chand, died on June 12. This has been announced by the Athletics Federation of India. He was 69. Chand won a ‘double’, the 5,000m and 10,000m at the 1978 Bangkok Asian Games.it was around his feat that India produced several long distance athletes who have brought medals for India.

He had shifted back from Delhi to his hometown in Punjab’s Hoshiarpur, citing heart problems. He was born in rural Punjab’s Ghorewaha and as a kid he would chase rabbits in the field. According to him this helped build stamina and passion for running. He once spoke about chasing a rabbit that was nibbling at the crop while he was on watch. He chased the rabbit all day, finally caught it and brought it back as a trophy.

At the 1976 Montreal Olympics, he ran a national record 28:48.72 in 10,000m. Though an eighth-place finish didn’t help qualify for the final, his mark stood for almost 33 years, until Surendra Singh bettered it in the final at the 2008 Beijing Olympics.

Among the other brilliant distance runners of India, Bahadur Prasad in the 1990s and current versatile star Avinash Sable stand out. But none left a mark in a major Games like Chand did in Bangkok.

Turkey will now be official known as ‘Türkiye’
The Republic of Turkey will now be known as “Türkiye”. The United Nations has agreed to the change in name, following a request from Ankara. According to UN spokesman Stephane Dujarric, a letter had been received from the Turkish foreign minister Mevlut Cavusoglu addressed to Secretary-General Antonio Guterres, requesting the use of “Türkiye” instead of “Turkey” for all affairs.

Turkey began the move to change its internationally recognised official name in English to Türkiye in December after Turkish President Recep Tayyip Erdogan released a memorandum and asked the public to use Türkiye to describe the country in every language.

Erdogan also advised companies to use “made in Türkiye” for their exported goods, and instructed state agencies to use Türkiye in their correspondence.

With new biotech capabilities and innovation, J&K, bestowed with more than 3500 medicinal plant species, will be able to harness market advantages in the most effective way and help the farmers to generate more income, asserted the Lt Governor.

The Lt Governor said that another Biotech Park at Handwara, Kupwara is under construction and the park will cost Rs 84.66 crore, shared between Department of Biotechnology, GoI and Science and Technology Department of the UT government.

Meanwhile, Union minister Jitendra Singh said that the Biotech Park would act as hub for incubation of new ideas and will act as a robust platform to support the agri-entrepreneurs, startups, progressive farmers, scientists, scholars and students not only from Jammu and Kashmir and Ladakh but also from nearby states of Punjab, Haryana and Himachal Pradesh.

He said that the biotechnology park at Kathua has a potential to produce 25 startups in a year which will be among its great contributions to this region.

The railway terminal at the city’s Baiyappanahalli area, named after Bharat Ratna Sir M. Visvesvaraya, is equipped with state-of-the-art facilities and claims to have an airport-like aura. The terminal is which is situated between Banaswadi and Baiyyappanahalli in the city. The other two major terminals in Bengaluru are Bengaluru City Railway Station and Yeshwantpur Railway Station.