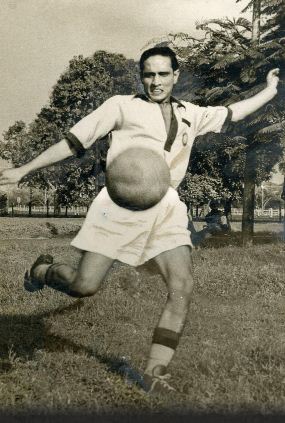 Samar Banerjee, better known by his nick name ‘Badru’, who captained India to a fourth-place finish in the 1956 Melbourne Olympics, has passed away. He was 92.

Banerjee was admitted to a city hospital with age-related complications on July 27. His condition kept deteriorating as he also contracted COVID-19 and breathed his last in the early hours of July 30.

Badru, was greatly revered by all generations of footballers and supporters for his amiable nature. Born on January 30, 1930, Badru started his career with Calcutta (Kolkata) club Milan Samity before joining another club Bally Protiva, a club in his native town in the Howrah district adjacent to Kolkata.

Badru became a Mohun Bagan stalwart and stayed with the club for eight seasons before hanging up his boots at the age of 30. He then took up coaching and went on to manage the Bengal football team, which won the National championship for the Santosh Trophy in 1961.

After his coaching stint he went on to become a Bengal selector and remained associated with the Indian Football Association for a considerable period. The West Bengal government honoured Badru Banerjee with the Lifetime Achievement Award in sports in 2017.

Pulitzer for Bangla-born illustrator Fahmida Azim
Bangladesh-born Fahmida Azim working for the Insider online magazine of the United States has been selected for the 2022 Pulitzer Prize under the category of Illustrated Reporting and Commentary. She is among the four journalists including Anthony Del Col, Josh Adams and Walt Hickey of Insider being published from New York, selected for their work on the Chinese oppression of the Uyghurs. The work ‘I escaped a Chinese internment Camp’ has illustrations by Fahmida Azim.

The citation for the award said that they have been selected for the prize for using graphic reportage and the comics medium to tell a powerful yet intimate story of the Chinese oppression of the Uyghurs, making the issue accessible to a wider public.

Fahmida Azim was born in Bangladesh and now settled in the US. She is an illustrator and story teller. Her work centres on themes of identity, culture and autonomy.

Her art works have been seen in several international journals like the NPR, Glamour, Scientific American, The Intercept, Vice, The New York Times among others. She has illustrated a number of books including her own notable project ‘Muslim Women Are Everything’.

“All the members of the jury were touched by her courageous decision in 2015 to welcome more than 1.2 million refugees, notably from Syria, Iraq, Afghanistan and Eritrea. This is the legacy she leaves,” jury president and 2018 Nobel Peace Prize winner Denis Mukwege said on Tuesday (August 24).

The director general of the UN cultural organization, Audrey Azoulay, also praised Merkel, saying her win serves as a reminder “that the way in which we treat migrants and refugees is a critical issue”, says a news agency.

The honour, which is officially called Felix Houphouet-Boigny-UNESCO Peace Prize, is named after the former president of Ivory Coast.

It has been awarded each year since 1989 to individuals, organisations or institutions that have made a special effort to promote, research or secure peace.

“The Appointments Committee of the Cabinet has approved the appointment of Dr Debasisa Mohanty, staff scientist-VII, NII, and New Delhi to the post of Director, National Institute of Immunology, with effect from the date of assumption of charge of the post and upto the age of his superannuation,” the order said.

17-yr-old sets record for solo flight around the world
A 17-year-old pilot became the youngest person to fly solo around the world in a small aircraft after he landed in Bulgaria, where his journey kicked off five months ago.

Mack Rutherford, of Belgian-British dual nationality, landed on an airstrip west of Bulgaria’s capital, Sofia, to complete his task and to claim two Guinness World Records.

Rutherford said he hoped his achievement would inspire young people to pursue their dreams.

Mack Rutherford took the age record from Travis Ludlow of Britain, who was 18 when he made a solo flight around the world last year. The journey, which began March 23, took Rutherford through 52 countries over five continents. He turned 17 during the trip.

A gem of movie on a gem of man