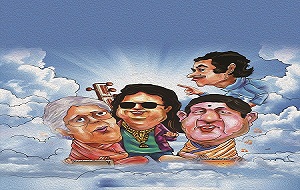 It has been a sad number days for  Indian music lovers. First it was Lata Mangeshkar, and now two more singer-composers, loved by the people, have left for their heavenly abodes.

The Indian music world is slowly being depleted. Just the other day, the country lost two more extraordinary people from that world. The first to pass away was revered Bengali singer Sandhya Mukhopadhyay, a classical-trained singer who ruled the Bengali song industry for long, and the next was another Bengali, Bappi Lahiri, who ruled the ‘Disco’ scene in Bollywood and gave rise to a new genre in music through his compositions. With the recent passing away of Lata Mangeshkar, India is so much poorer for it.

Bappi Lahiri (69) breathed his last on Febaurry 15 night, at the CritiCare Hospital in Juhu, Mumbai. According to Dr Deepak Namjoshi, director of the hospital: “Lahiri had been admitted to the hospital for a month and was discharged on Monday. But his health deteriorated on Tuesday and his family called for a doctor to visit their home. He was brought to the hospital. He had multiple health issues. He died due to OSA (obstructive sleep apnea) shortly before midnight.”

Last year he had been admitted to Mumbai’s Breach Candy Hospital after testing positive for Covid. That time, he had recovered after a few days.

He is survived by two children, a son Bappa Lahiri and a daughter Rema Lahiri. His son is married to Taneesha Lahiri with whom he has a son Krishh Lahiri.

Bappi was Alokesh
His real name was Alokesh Lahiri (born November 27, 1952). Bappi was his nickname, a pet name that his parents called him by. He was born in Jalpaiguri, West Bengal, to Aparesh Lahiri and Bansuri Lahiri, both established Bengali singers and musicians in classical music and Shyama Sangeet. His entire family was connected to music, so melodies came naturally to him. His relatives include singer Kishore Kumar, who was his maternal uncle.

He himself started early, getting tabla lessons from the age of 3. Initially, he was trained by his parents, but later more professional training ensued.

The rest, as it is said, is history. India has always been rich in music and culture, but it was Bappi, who popularised a widespread use of synthesized disco music in Indian cinema. He also sang many of his own compositions, some gaining such popularity that even Russian President Mikhail Gorbachev and his wife Raisa Gorbacheva saw the movie Disco Dancer several times and regaled at the song “Jimmy Jimmy Jimmy, Aaa Ja Aaa Ja…”

Bappi travelled to to Mumbai when he was 19. He received his first opportunity in a Cinema of West Bengal, Daadu (1974) where he made Lata Mangeshkar sing his composition. The first Hindi film for which he composed music was Nanha Shikari (1973) and his first Hindi composition was Tu Hi Mera Chanda sung by Mukesh.

The turning point of his career was Tahir Husain’s Hindi film, Zakhmee (1975), for which he composed music and doubled as a playback singer. He composed a duet with Mohammed Rafi and Kishore Kumar named “Nothing Is Impossible”, for the same film.

Politics
Bappi Lahiri also dabbled in politics a bit. He joined the Bharatiya Janata Party on January 31, 2014 in the presence of Rajnath Singh, the then national President of the party. He was to contest the 2014 Lok Sabha elections. He was made a BJP candidate from Srirampur (Lok Sabha constituency) in 2014, but lost to Kalyan Banerjee of All India Trinamool Congress.

A love for gold
The biggest trademarks in his appearance were his many, heavy gold chains around his neck. Plus his sunglasses, that he wore even when the sun had set. He said his chains were for luck. In one interview he had said that he was heavily influenced by American pop star Elvis Presley, who also wore a gold chain during his concerts.

Bappi’da had said in that interview that after seeing Elvis Presley, “I used to think that when I become a successful person, I will create my own image. Impressed by Pressley, I wear gold and it is very lucky for me.”

Sandhya Mukhopadhyay was 90. She died in a private hospital in Kolkata on Tuesday evening of a massive cardiac attack. She is survived by her daughter and son-in-law.

Mukherjee, who was considered a legend during her lifetime, refused to accept the Padma Shri award on January 24. She had been in the hospital since January 27 due to ill health and was put on vasopressor support and shifted to the Intensive Care Unit (ICU) earlier in the day following a drop in her blood pressure.

She sang thousands of songs for Bengali cinema and her albums of modern and semi-classical music. She also recorded many songs for Hindi cinema. Her duets with the legendary Hemanta Mukherjee, who became popular in the Hindi film industry as Hemanta Mukherjee, are considered assets by millions of her fans. The industry gave her the title Geetashree.

Born in Kolkata in 1931, she recorded her first song in 1948 for the Hindi movie Anjaan Garh. The music was composed by Rai Chand Boral. She sang under the direction of famous composers such as S D Burman, Roshan and Madan Mohan. Her career spanned over 70 years.

She was a student of Ustad Bade Ghulam Ali Khan. Of the many awards, she received the Banga Bibhusan, highest civilian honour given by the Bengal government, in 2011 and the National Film Award for best female playback singer in 1970 for the movies Jay Jayanti (a Bengali remake of Sound of Music) and Nishi Padma. Nishi Padma was remade in Hindi as Amar Prem, starring Rajesh Khanna.