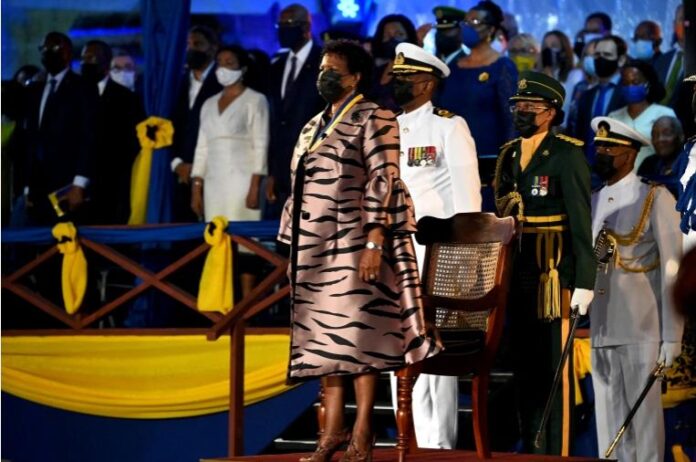 The Caribbean island nation of Barbados has finally realised that kneeling before a while queen, that too of Britain, the country’s long-time oppressor, had been a foolish act for 55 years since the country gained its independence from the colonisers. Good sense has finally prevailed, and on November 30, the country declared itself a republic. Now they call themselves “We the people are Barbados”, and the country’s first president, Sandra Mason, is proud of it.

The change happened at the stroke of midnight, and from December, the little, happy country, is happier. It took a while a rather long while, actually but now the remnants of British rule has been wiped out and Queen Elizabeth is not more the head of state.

This Queen fetish has remained with 17 countries, including Australia and Canada, despite a section of Australians having vehemently demanded a separation for long. The psychology behind this fetish remains unexplained. Whether there is financial gain, or political gain, or just a fetish, requires deep introspection, but it certainly has not been a healthy one. To put things in perspective, there is no British ‘empire’ anymore; it is an almost laughable concept today.

What is strange is that while these countries 17 of them do, still carry the symbols of the colonialism, how they exist in their minds, alongside memories of violence and inequality is a mystery.

Barbados did that for a time too long and finally decided that it just had to cut off the strings that existed through 400 years under the British Empire and then 55 years even after that. The trade links, the forcible commerce, the depletion of local raw materials and the oppression, plus complete subjugation of human rights and freedom of speech and basic rights of people. It was a nightmare that simply had to be forgotten.

This was a good time as any, though the pandemic has somewhat crippled the economy, and the fetters of slavery now finally done away with, the country has the ability and the responsibility of judging themselves by their own standards, developing with own hopes and aspirations. What the country has also realise in these times is that having the queen as the symbolic head of state has provided little succour to the country, providing zero impetus to any effort at  economic growth or personal freedoms.

Moreover, the hope that a symbolic alignment with the British Isles would provide business opportunities proved to be a mirage. The situation reminded the Barbadian of the times when Britain prospered at the cost of Barbados’ ill-fate, how enterprise was snatched from the local people, how hollow the self-esteem of the locals was made out to be by the ‘masters’. If Britain is still a wealthy nation today, that is in no small part the contribution of its colonies; colonies that the empire ravaged and looted.

Remember the Hong Kong handover of 1997? It was symbolic, and no amount of British guile worked later. In the changing of Barbados to a republic, Charles Windsor, next in line for the British throne, attended and supported the celebration. It is said that this was an effort from the throne, as well as from the British government to ameliorate the hundreds of years of pain that the empire had heaped on the Barbadians. Whether this little symbolism will work or not is another matter, but, at least, this is a sign that new beginnings are possible; new alignments, new trade alliances, new line of credit on proper terms and a new respect for the self realisation of a new nation.

Memories are difficult, especially such cruel memories. The British Royal family, for example, made a substantial amount of money from the slave trade. Now reparations are a part of the demands, and decency says that should be allowed.

Remember our own Sashi Tharoor at the Oxford Union debate? He talked about reparations. But he said ‘we don’t want your money; we want an unconditional apology.’ How hard is that to give?