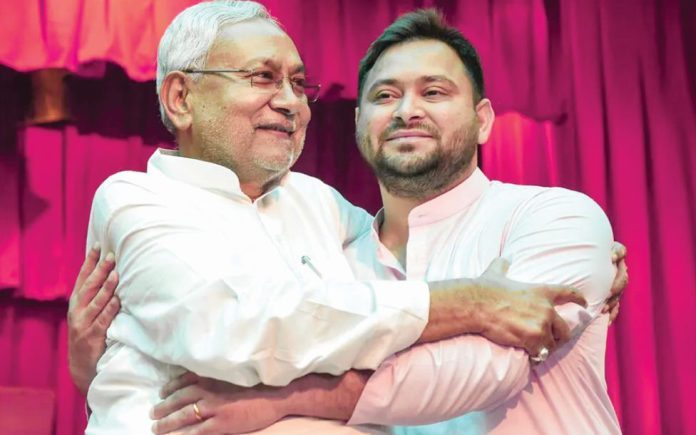 What is new about the latest action of Jumping Jack Flash Nitish Kumar?  People are talking thirteen to the dozen about how the BJP’s Chanakya (Amit Shah) has been outsmarted by Bihar’s home grown wisdom head. All that is a matter of conjecture, but what can be summarized from early-August developments is the fact that the Opposition, including the Congress, is probably not dead yet; not in Bihar, at least.

The story of Chief Minister Nitish Kumar upending his own alliance with the BJP (in the NDA), going to the Governor against incumbent Chief Minister Nitish Kumar, claiming to form a new government in an alliance with the RJD and the Congress (in a Maha Gathbandhdan) with a new Chief Minister, Nitish Kumar, as the head is funny, though not riveting. In Bihar, such outcomes will be noted by the starving public as the chula and the fire. It matters little whether the fuel is charcoal, or wood, or even gas, as long as the chula cooks. And, mostly, it doesn’t.

However, what gathers around in the public domain is the fact that the Congress seems to have won the lottery. If the realignment had any real surprise for anybody, it was this party, a venerable nationwide Opposition, today on feeble knees. The side-switching circus of Nitish Kumar, or the blame-storm of the BJP, has been viewed with interest, while the Congress, finally, managed to keep its flock intact. Remember, this was one of the key observations (of its flock being intact) in the recent Maharashtra debacle of the Shiv Sena. There had been a lot of Gaya Rams leaving the party, but the dust seems to have settled. There is a possibility of regrouping.

The big Cong picture
How did the overall picture look, after counting in the last assembly elections in Bihar? The NDA sealed the day on a slim verdict, winning with 125 seats, the BJP winning 74, Nitish Kumar’s Janata Dal (United) 43, with others contributing.

Nationwide that is the approximate data for the Congress today.

The correlation
If we look at the rise of vote share of the BJP and fall in Congress participation in the share, we see the two are interrelated. The rise of the BJP share seems to have happened directly at the cost of the Congress depletion. This means that the reverse could also come true, given ideal conditions and also considering the fickle manner of our electorate. It’s the same theory of the chula: the fuel is unimportant, the fire is.

In the long run, any party can use a ruse or a fad to its fullest extent, but when development and policy protection suffers, public perception may change quite suddenly. The ruse and the fad, however close to the hearts of the people, will take a backseat and the voters will change.

A caveat: Within this, though, there is a caveat. Indians have been known to be argumentative and quarrelsome, but throughout history, there has been only one instance of an organised ‘revolt’, during what is called as the Sepoy Mutiny of 1957. Not only was it ruthlessly put down by the British, the religion-related nature of the revolt adds to the theory that Indians do not understand a social principle. Not only cannot they make up their minds about what is good or bad for themselves, they cannot fight for even the most basic of rights. Every ruler down history has known this clearly, hence Indians in general have been subdued and ruled over centuries.

They cannot follow their hearts, they accept defeat even before the battle. The overall belief of Indian being meek is argued against as India being one of brave-hearts. Sure we have and have had brave-hearts, but as a nation, there is something lacking that has allowed corruption at a national level survive. Then there is this obscene practice of servitude. Remember how major minister lay supine before Jayalalithas, when she was chief minister, or how the Congress just cannot see beyond one particular family?

One has to get rid of such stupidity, and in the 75 years of Independence, we need to show to one and all our maturity.

The Prime Ministerial hope?
There has been talk that Nitish was dissatisfied with the BJP because he was not chosen as the vice-presidential candidate. But that may not be right. Nitish believes he has a long innings yet in politics. Instead, the other belief is that Nitish has grown a desire to be Prime Minister. How that is possible within the current regime and system is not clear. It is not clear how, having made himself a laughing stock with eight chief ministerial strokes, can he convince the public as to any particular ideology he believes in, can he hope for the top post.

So how could Nitish’s PM hope, if at all, affect other parties, especially the Congress? Is Nitish looking ahead to 2024? One has to wait till Aug 24, when there is a floor test.

Tejashwi Yadav, Nitish’s deputy today, has hope for the top post. Hence the support of both the RJD and Congress for JD(U). We will wait for more tense moments from the game.