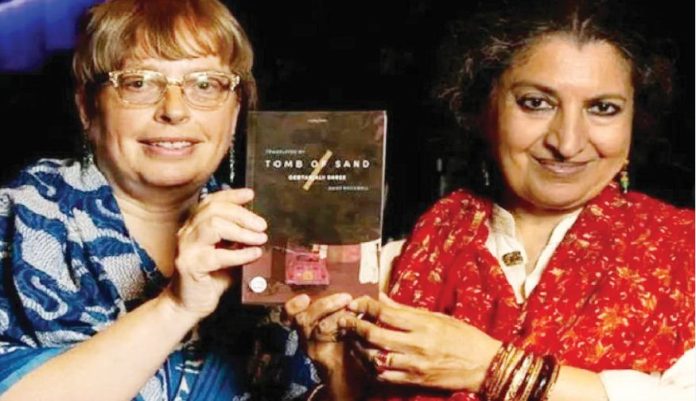 Indians have won the prestigious Booker Prize before, but never for a book written in an Indian language. This year marks the first time and Indian has won the International Booker, for a book written in Hindi. It not only showcases the richness the language has earned over the years, but also the immense hidden talent thereof. This could also be the beginning of awardees in other Indian languages in the future.

The proud author, the toast of the country, is Geetanjali Shree, who has been named winner for her “utterly original” Hindi novel ‘Ret Ki Samadhi’ translated to English by Daisy Rockwell, with the title ‘Tomb of Sand‘.

The book is a family saga set in northern India, and is about an 80-year-old woman who travels to Pakistan to confront the unresolved trauma of her teenage experiences of Partition and re-evaluates what it means to be a mother, a daughter, a woman and a feminist.

The 64-year-old New Delhi-based Geetanjali Shree was felicitated with the prize at a ceremony in London on May 26. She said she was “completely overwhelmed” with the “bolt from the blue” as she accepted her £ 50,000 prize, and shared it with Daisy Rockwell. The prize is split between author and translator equally.

Rockwell, a painter, writer and translator living in Vermont, US, joined her on stage to receive her award for translating the novel she described it as a “love letter to the Hindi language”.

As she was mentioned in the longlist, Shree had said: “Writing is its own reward. But getting recognition as special as from Booker is a wonderful bonus. The fact that there is much that is dismal all round in the world today, adds to the value of positive vibes in fields like literature. Stands out in my heart as hope…”

She continued: “I never dreamt of the Booker, I never thought I could. What a huge recognition, I’m amazed, delighted, honoured and humbled.”

Then, in her acceptance speech, Geetanjali Shree said: “There is a melancholy satisfaction in the award going to it. ‘Ret Samadhi/ Tomb of Sand’ is an elegy for the world we inhabit, a lasting energy that retains hope in the face of impending doom. The Booker will surely take it to many more people than it would have reached otherwise, that should do the book no harm.”

The longlist this year was actually long. There were 13 books competing for t he prestigious award. All these books (novels) had been translated into English from 11 languages, belonging to 12 countries across four continents. That was a massive spread of talent, and to take the cream from this immense talent pool is, in itself, a great achievement.

In Shree’s story, the 80-year-old woman, who had gone into deep depression following the death of her husband, puts up a fight and decides to visit Pakistan instead, wanting to confront her pre-Partition past.

Ma, the protagonist’s decision to travel to Pakistan, simultaneously confronting the unresolved trauma of her teenage experiences of Partition, and re-evaluating what it means to be a mother, a daughter, a woman, a feminist places fundamental issues of safety, security and principle before Ma’s family. It is, thus, also a story of how she overcame that.

Shree was born in UP’s Manipuri and is based in Delhi. She has three novels and several story collections. She has had her works translated into English, French, German, Serbian, and Korean.

Originally published in Hindi in 2018, ‘Tomb of Sand’ is the first of her books to be published in the UK in English by Tilted Axis Press in August 2021.

Shree’s novel was chosen from a shortlist of six books, the others being: Cursed Bunny’ by Bora Chung, translated by Anton Hur from Korean; A New Name: Septology VI-VII’ by Jon Fosse, translated by Damion Searls from Norwegian; Heaven’ by Mieko Kawakami, translated by Samuel Bett and David Boyd from Japanese; Elena Knows’ by Claudia Pineiro, translated by Frances Riddle from Spanish; and The Books of Jacob’ by Olga Tokarczuk, translated by Jennifer Croft from Polish.

“The constantly shifting perspectives and timeframes of Geetanjali Shree’s inventive, energetic Tomb of Sand’ lead us into every cranny of an 80-year-old woman’s life and surprising past, ” the judges said of the Hindi novel, when the Booker Prize long list was announced. “Daisy Rockwell’s spirited translation rises admirably to the complexity of the text, which is full of word play and verve. A loud and irresistible novel.”

This year the judges considered 135 books and for the first time in 2022, all shortlisted authors and translators will each receive £ 2,500, an increase from £ 1,000 in previous years bringing the total value of the prize to £ 80,000.