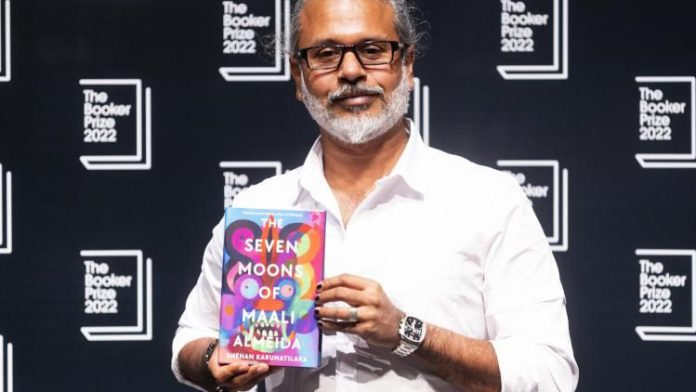 Sri Lankan Shehan Karunatilaka has won the Booker Prize 2022 for his second novel, The Seven Moons of Maali Almeida. The announcement was made by Neil MacGregor, chair of the 2022 judges, in a ceremony at the Roundhouse, London, on October 17. The Seven Moons of Maali Almeida tells the story of a war photographer who has woken up dead in what seems to be a celestial visa office. He has ‘seven moons’ to try and solve the mystery of his death and to help unveil a cache of photos that will rock war-torn Sri Lanka.  In addition to his two novels, Karunatilaka has worked as an advertising copywriter, as well as writing songs, screenplays and travel stories.

The novel was recognized for its scope and the humorous narrative tactics that bring home the fact that concepts of corruption, race-baiting, and cronyism will never work.

In 2010, he published his debut book titled “Chinaman: The Legend of Pradeep Mathew”. This work received the 2012 Commonwealth Book Prize and gave the author global recognition.

Conservative PM for Sweden
Sweden’s parliament on October 17  elected conservative leader Ulf Kristersson as prime minister at the head of a centre-right coalition that has promised to crack down on crime and curtail immigration in partnership with a populist party with far-right roots. Kristersson, 58, was elected in a 176-173 vote.

His three-party coalition secured a majority in the 349-seat Riksdag, or parliament, after the September 11 election by teaming up with the Sweden Democrats, a party founded by right-extremists in the 1980s. The party has softened its image and moved toward the mainstream, but was until recently considered too radical to work with by all other parliamentary groups.

Kristersson presented a deal last week whereby his conservative Moderate Party will form a government with the smaller Christian Democrats and Liberals, while coordinating government policies closely with the Sweden Democrats, which won 20% of the vote to become Sweden’s second-biggest party.

Ramanujan Prize for Peking Univ. alumna Tang Yunqing
Peking University alumna Tang Yunqing was awarded the prestigious SASTRA Ramanujan Prize for 2022, according to a statement by the Shanmugha Arts, Science, Technology & Research Academy (SASTRA) on October 3. She is the first female mathematician of Chinese descent to be honoured with the prize.

The award is presented annually to a person aged 32 and below for outstanding contributions in the field of mathematics, influenced by Srinivasa Ramanujan in a broad way. The award was instituted by the Shanmugha Arts, Science, Technology, and Research Academy(SASTRA) in 2005 including a cash prize of $10,000.

Yunquing Tang was born in China. She did B.Sc at Peking University in 2011. Later Tang went to Harvard University for higher education. In 2016, Tang completed her PhD at Harvard under the direction of Mark Kisin. She joined UC Berkeley in July 2022 as Assistant Professor after stints at Princeton University as a postdoctoral fellow, Instructor, and Assistant Professor.
It is worth mentioning that all four Chinese mathematicians who have received the award so far are Peking University alumni. Zhang Wei, Yun Zhiwei and Liu Yifeng were recognized in 2010, 2012 and 2018, respectively.

Kurdish politician Abdul Latif is new Iraq president
Iraqi lawmakers have elected Abdul Latif Rashid as the new President of Iraq, taking a crucial step toward forming a new government for the country.

Rashid received 162 votes in the second round of voting, defeating Barham Salih, who gained 99 votes, while eight votes were considered invalid, according to the media office of the parliament on October 13.

The newly-elected Rashid was later sworn in as the President of Iraq, the fifth President of the country since 2003.

Rashid, 78, is a veteran Kurdish politician born in the city of Sulaimaniyah in northeastern Iraq. He worked as Minister for Water Resources from September 2003 to December 2010.

He is an active member of the Patriotic Union of Kurdistan (PUK) under the leadership of Jalal Talabani, who became President of Iraq in 2005.

Rashid was formerly a spokesperson for the PUK in Britain, where he received a bachelor’s degree in civil engineering in 1968 from Liverpool University, a Master’s degree in 1972, and a doctorate in Engineering from Manchester University in 1976.

Rashid’s election as President came as political tensions have been rising in the past months between the Shia cleric Moqtada al-Sadr’s Sadrist Movement, the biggest winner in the parliamentary elections in 2021, and its rivals in the CF alliance.

“Not a ‘Ms Pleasant’ but more of a ‘Ms Militancy’, like the title of one of her books,” said vice-president of German PEN Centre Cornelia Zetzsche.

Her books include “The Gypsy Goddess”, and “When I Hit You: Or, A Portrait of the Writer as a Young Wife”.

Meena Kandasamy was born in 1984 in Chennai, Kandasamy is a feminist and anti-caste activist whose work revolves around the issue of gender, caste, sexuality, patriarchy, and oppression by the Brahmanical system. Her novels have been shortlisted for the Women’s Prize for Fiction, the International Dylan Thomas Prize, the Jhalak Prize and the Hindu Lit Prize. She previously held an editorial role at the English-language magazine The Dalit.

Kandasamy has been a vocal critic of the arrest of fellow writers like Varavara Rao and former Delhi University professor G N Saibaba.