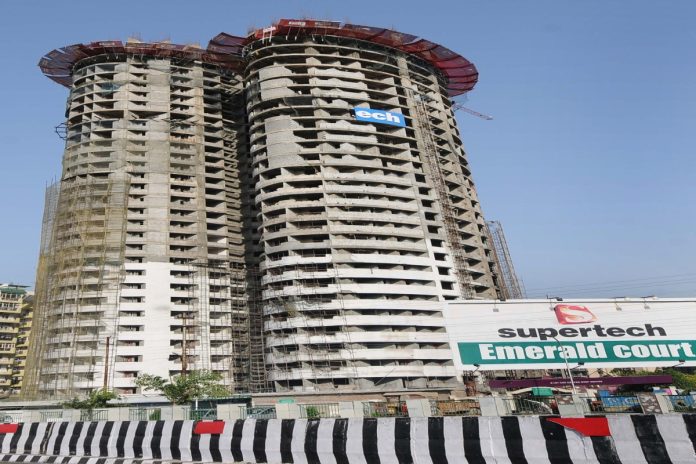 32-storey towers will be demolished in Noida’s Sector 93-A, because the court found that the builders had violated all building norms. There is nothing new in that. In India illegal houses are demolished all the time. The big difference, however, is the manner in which they will be demolished. This will be done in what is in common parlance called ‘waterfall’ demolition.

The final demolition of the Supertech twin towers – basic dismantling, involving workers, is already on – will take place on May 22. This demolition happens nearly 20 months after the Supreme Court’s order on that.

The demolition will be carried out through controlled explosions, with the help of South African company Jet Demolition. Jet Demolition is a partner of Mumbai-based Company Edifice Engineering, whose owners live in America.

This may not be the first time such a demolition is being attempted in India. The same duo of companies had demolished four 70 metre tall illegal buildings in 2020 in Kochi. The buildings had come up not complying with coastal regulation zone norms.

However, this will be the first time such tall structures will be brought down. One tower, called the Apex tower, is 100m tall. The other, called Ceyane, is 97 metres tall.

Engineers from the two companies reached the site and started their basic investigation and data collection for the demolition. The team is experienced. In 2019, the team had very successfully demolished the 108m tall Bank of Lisbon building in Johannesburg, South Africa. That demolition was critical, because there was another building exactly 7.8 m away from the bank building. There was no trouble at all.

However, there needs to be a few critical and important steps to be taken before that.

The critical preparation
The first building to be demolished through this ‘waterfall’ process will be the shorter of the two, the Ceyane (97 m). At least, that is the proposal given by the companies so far. The detonations will be done in a way that the building, sort of, ‘implodes.’ While the usage of this term is not scientifically correct, the visual impact of the effect will make it seem thus.

The plan now is that the Apex will implode in the direction of Ceyane by inducing a ‘lateral pull’ away from the other buildings on the compound. The plan is to make both towers collapse, so that there is no injury and so that the debris falls into the basement space in between.

The procedure is painstaking and difficult. It has involved drilling 960 holes in the building and the placing of 15kg explosives. The idea of drilling the holes is to weaken the structure, so that it collapses easily (and in the desired direction) during demolition without affecting other towers nearby.

The explanation, offered by an engineer was that “just as a waterfall falls on the ground from a height, in the same way a building also falls due to waterfall implosion. During this, holes will be made in the columns, beams and walls of both the buildings for the explosion. The columns will be wrapped in geotextile cloth with a netting to prevent debris from flying around during the blast. This will reduce the building debris. Not only this, the dust clouds of the towers located in Sector 93A will rise to the top and may take 10 to 15 minutes to stop.”

A complicated process
Understandably, this is a very complicated process, and only experts in the field are allowed to handle this. Following the demolition, about 3,000-3,500 trucks full of debris will be pulled out of the site.

The final preparation for the process – waterfall implosion – will take three months. The explosions will have to be carefully controlled, so that the effect of the explosions to do radiate out of the implosion zone, affecting nearby structures.

The procedure is painstaking and difficult. It has involved drilling 960 holes in the building and the placing of 15kg explosives. The idea of drilling the holes is to weaken the structure, so that it collapses.

The actual demolition process is just about a minute. But total time, including the final preparation, extends to six months. This includes mobilisation of resources, manpower, planning and evacuation of the nearby residents, if necessary.

Then there are safety precautions to be taken for residents in neighbouring apartments.

For structures in Village and Emerald Court (adjacent, just 9m away), work will be on the following:

On May 22, say authorities, the building will come down in 6-8 seconds flat. The dust, though, will take much longer to settle down. There is no fixed time limit for that. The debris will be removed in two to three months after that.