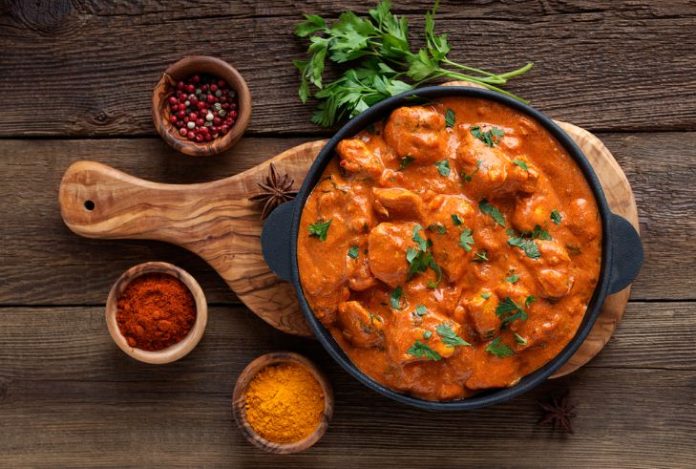 Wikipedia says “chicken tikka (masala) is a chicken dish originating in the Indian subcontinent during the Mughal era. The dish is popular in India, Bangladesh and Pakistan.” This is garbage. Chicken tikka is an Indian style British dish, having originated in England. However, there is a better version of chicken which actually did originate in India. It is called butter chicken. In India we also know it as murgh makhani.

What is this special dish? It is typically a curry, made with chicken, garnished with spiced tomato and butter sauce. Its sauce is known for its rich texture and consistency. It is similar to chicken tikka masala, which uses a tomato paste.

How to describe butter chicken, one of India’s richest dishes? It is basically succulent chicken pieces wrapped in an utterly butterly (apologies to Amul) combination of cream, tomatoes and aromatic spices. This is a culinary star preparation that tickles palates across the world. Murgh makhani, as known in Hindi, is also one of the most popular Indian dishes recreated around the world. While this iconic dish remains a much-loved favourite on menus across the country, few Indians know about the humble and practical origins of the butter chicken.

History
The story of how butter chicken came to be invented is almost as interesting as the dish itself. Punjabi cuisine has always been a symbol of a good, rich life, full of incredible flavours. Recipes like butter chicken and ‘sarson ka saag’ that have achieved a cult status globally, are a small reflection of the culinary legacy of the land of five rivers, undivided Punjab.

Mokha Singh Lamba, a Punjabi cook, had started making tandoori chicken in Gora Bazar in Peshawar in a small dhaba. “He had two helpers, Kundan Lal Gujral and Kundan Lal Jaggi, who used to work for him. After Independence, they both migrated to Delhi and started a restaurant in Delhi’s Daryaganj. Their recipe of tandoori chicken got popular, but leftover chicken was a problem as we never had refrigerators during that time. So, to keep it fresh for a long time, and moist, they made tomato gravy and added to tandoori chicken. This way butter chicken came into existence in 1950.

The Moti Mahal, in pre-partition days, was a restaurant in Peshawar founded by Mokha Singh Lamba. Both Kundan Lal Gujral and Kundan Lal Jaggi worked there as servers for some years. Thakur Dass was at his family’s rice and pulses wholesale business just across the road from the restaurant.

The Moti Mahal shut down just before partition. During these difficult times, many refugees moved to areas of India, bringing their various skills and culture with them. Peshawar cuisine was soon to find a new home in Delhi when the chance came to revive the original Moti Mahal in the capital territory. Mokha Singh Lamba, although he was then too old to continue running the restaurant, was happy for the three entrepreneurs to use the original logo and gave his full blessing to the enterprise.

With a growing population of Punjabis in the region, there was a ready-made legion of potential customers who wanted to eat traditional Peshawar fare. The trio began by selling breads and tea but then purchased three tandoors and began serving fish and chicken too.