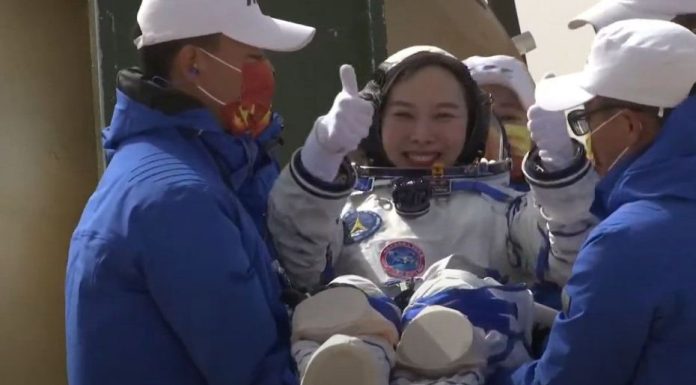 Wang became the first Chinese woman to spacewalk last November, as she and her colleague Zhai installed space station equipment during a six-hour stint. Mission commander Zhai, 55, is a former fighter pilot who performed China’s first spacewalk in 2008, while Ye is a People’s Liberation Army pilot.

Live footage from CCTV showed the capsule landing in a cloud of dust, with the ground crew who had kept clear of the landing site rushing in helicopters to reach the capsule. The ground crew applauded as the astronauts each took turns to report that they were “feeling good.”

China launched its first astronaut into space in 2003 and landed robot rovers on the moon in 2013 and on Mars last year. Officials have discussed a possible crewed mission to the moon.

On Saturday (April 16), state TV showed images from inside the capsule as it travelled at 200 meters per second over Africa before entering the atmosphere.

The trio were the second crew aboard Tiangong, or Heavenly Palace. Its core module, Tianhe, was launched in April 2021. Plans call for completing construction this year by adding two more modules.

Authorities have yet to announce a date for launching the next Tiangong crew.
China was the third nation to launch an astronaut into space on its own after the former Soviet Union and the United States. Tiangong is China’s third space station following predecessors launched in 2011 and 2016.

Besides a space station, Beijing is also planning to build a base on the moon, and the country’s National Space Administration said it aims to launch a crewed lunar mission by 2029.