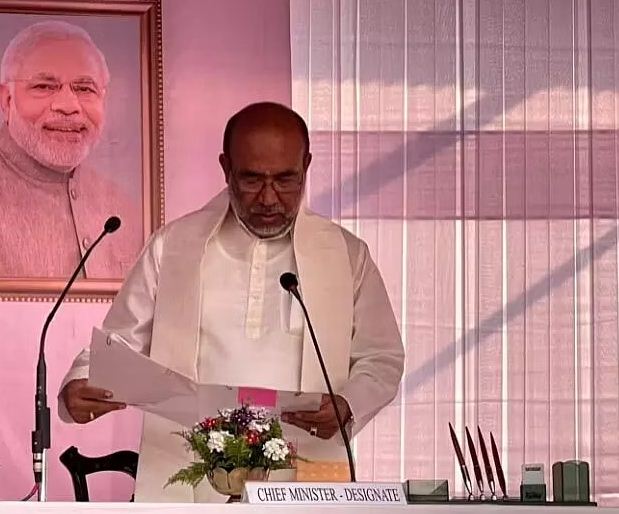 Nongthombam Biren Singh of the Bharatiya Janata Party (BJP) was sworn in as chief minister of Manipur for a second consecutive term on Monday (March 21). The cabinet ministers who took oath with Biren Singh and Biswajit Singh were Yumnam Khemchand Singh, Govindas Konthoujam, Nemcha Kipgen, all from the BJP, and Awngbow Newmai from the Naga People’s Front (NPF).

Manipur governor La Ganesan administered the oath of office and secrecy to Singh and the ministers.

In the assembly elections, the BJP secured a majority by winning 32 of 60 seats, while the National People’s Party, an ally of the previous government in Manipur, won seven seats. The Congress and NPF secured five seats each. Janata Dal (United) bagged six seats. Newly formed KPA bagged two seats, while three others were won by Independents.

Biren Singh began his career as a footballer, playing for the Border Security Force (BSF). In 1992, he quit the BSF to start publishing his vernacular daily Naharolgi Thoudang, and worked as the editor till 2001.

He joined the Democratic Revolutionary People’s Party in 2002 and won assembly elections from the Heingang seat. He joined the Congress in 2003 and retained the seat in 2007. He was appointed as a cabinet minister in the Congress-led government in 2012. He quit the Congress and joined the BJP in 2016.

In 2017, Biren Singh won the elections and became the first BJP chief minister of Manipur.