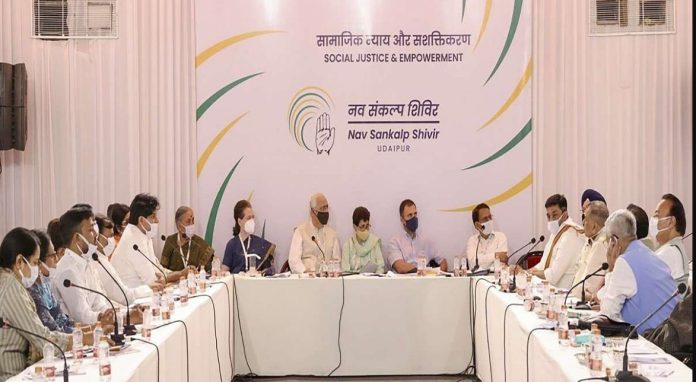 There has been a recent school of thought which says that the problems within the Congress do not emanate from the leadership; they do from the states. There is a feeling that the problems at the state level have to be addressed and that will cure the Congress of its ailments. Of course there is a lot wrong with the states – in almost all the states, in fact – but on what basis can the central leadership of the party (euphemistically called High Command) be exonerated?

The outcome of the so-called Chintan Shivir, attended by all, including many from the G23 group, engaged in everything but the thought process it was supposed to have. In the Congress today, free thought is as rare as the dodo, and one is not sure how many in the ‘High Command’ have any command over their thought processes, leave alone the grey matter to act as a catalyst to the process.

The outcome was as expected and some committees were made – wow, who knew? – and an ‘election’ will be held around August to get a new President. We will wait for all the fiasco to happen.

Meanwhile, we can delve into the degrading state of the states.

Let us start from the beginning. The Indian National Congress was built, stage by stage, area by area, through initiatives from the local leadership, as well as from national level leaders. There was scope for all to have their say, resulting in early splits in the party as well. Frankly, the party was built top down, as well as bottom up. There was a meeting point in the middle, where each segment modified their demands and decisions towards a mutually acceptable situation. Differences remained, but it was accepted as a democratic exercise, rather than an affront to party discipline.

Hence Pradesh Congress Committees grew as much in stature as the party at the centre. There were leaders locally who held huge sway over the people, such as Dr Bidhan Chandra Ray, Chief Minister of West Bengal, Biju Patnaik, of Orissa (now Odisha) and many more.

The late Congress leadership – it boils down, again to the Nehru Gandhi family, and why this is, nobody knows – believes it entitled to behave like kings and queens. The big problem, as said in earlier articles, is not the Gandhis. It is the servile nature of the minions, who put themselves in elite categories, yet bow to the Gandhis. There seems to be no spine.

Hence, going by the trend Pradesh Congress committees have also developed an attitude of servitude. There is no logic in tie-ups with powerful local parties, fighting with everybody they can and not even bothered that in certain cases their vote share is lower than even the completely discredited CPI(M) nationwide (except Kerala).

The Congress has lost its eyesight. The low hanging fruits are also not visible to them. Along with that the other thing lost is grey matter. Not much of it is available within the Congress, leave alone with the Central leadership. Rahul Gandhi is still the uncrowned prince, and he decides policy without authority or accountability. He refuses to meet PCC heads and when they leave, he just blames the other party.

Forget those who left for the BJP. There was probably enough lucre involved as well. However, even a seasoned Congressman and Senior Advocate, Kapil Sibal, recently (May 25) applied for a Rajya Sabha seat with the help of the Samajwadi party. Akhilesh Yadav was present when he submitted his papers. This is a blot on the Congress, even if Sibal was part of the G-23 group.

The Congress is not a party owned by the Gandhis. The party belongs as much to other members as it does to the Gandhis. One would want to believe that if one has to take control and reorganise the PCCs, one has to first remove the mentality of servitude of the Gandhis from within the party. That would be a reform that can resonate till down to the PCC level, even down to the block level. Are we to believe that there is nobody within the Congress today who possesses adequate grey matter and character to upstage the generally unimpressive Gandhis?

The new school of thought says: “In the process, the party has been reduced to fiefdoms of the PCC chiefs…” That makes little sense. Local chiefs within the Congress earlier were always strong people. That did not break the unity of the party. In fact, it strengthened it. With local pygmies, fighting an election against parties as strong as the BJP, or the Trinamool Congress or the DMK or even the CPI(M) in Kerala would be impossible. That is especially so, because the Central leadership (read Gandhis) probably knows more about Italian politics than the politics of its own backyard.

Who gave the Gandhis the right to rule over the Congress? It is the Congress. The weak-minded people, used to servitude, cannot think of anything else. If anything has to happen to the Congress, the leadership has to be removed first. Guess which intelligent, educated person today would even dream of joining the Congress? Which educated person would want to be snubbed by semi-literates heading the party at the Centre?

The sad part is that even leaders such as Senior Advocate P Chidambaram, who is adept at great lectures, seem too scared to directly take on the semi-literates at the top. What is the secret behind this?

Do not blame the PCCs. People at the helm of PCCs are totally out of sorts, now knowing what hair brained idea the High Command thinks of next. On the one hand the poor person has to fight the dominant party in the state and then has to make the leadership understand why it might be logical to create a tie-up instead. The leadership mostly does not understand. They are yet to get a handle on Indian politics.

Nurture local bodies, even grassroots workers. Remember, money is needed today. Nobody is moved any more by your deeds during the Independence struggle. Repeating it makes no sense. Try to have an ideology, a target – social and political – and also a fundraising policy.

And all this can be done only by staying in India. Foreign travel can be restricted for a while, the nanis and the chachis can wait a while. All the while you try to develop a brain. Today’s Congress is new wine in an old bottle. It does not taste better that way. People will get to know the taste once the old bottle is opened. That will not sell.

Also, stop these Chintan Shivir charades. Do it, again, when you develop the capability to think. Not before. You are making a laughing stock of yourselves, and of the Congress.