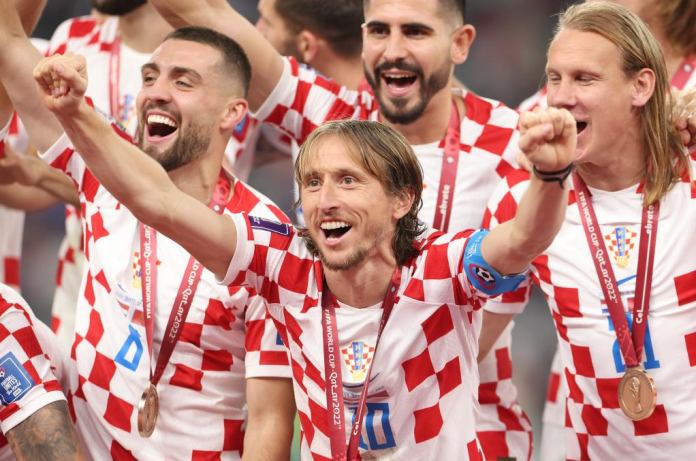 Croatia finally ended with a medal at the 2022 FIFGA World Cup in Doha, Qatar, on December 17, even if it was the third place medal.

Their hero Luka Modric played a central role in that consistency for 16 years and if he was not going to go out as a winner then he went out worthily after a 2-1 victory over Morocco in front of 44,137 in the Khalifa International Stadium.

All the goals came in the first half with fine strikes from Josko Gvardiol and Mislav Orsic either side of a Moroccan consolation for Achraf Dari.

Morocco, however, created a problem after the defeat, with half a dozen of them mobbing the Qatari referee at the final whistle. The match, though, was entertaining, very positive and end-to-end.

Croatia went ahead through an exquisite free-kick as Ivan Perisic caught out Morocco with a twisting back-header and Gvardiol dived full length to head home. Not to be outdone so fast, Morocco levelled immediately, also after a free kick. Captain Hakim Ziyech’s floated from out on the right wing was deflected goalwards by Lovro Majer for Dari to head his first international goal.

Croatia’s came back again , an Andrej Kramaric header saved by goalkeeper Yassine Bono and then inadvertently blocked a goal-bound shot from Orsic. Morocco At the other end an Achraf Hakimi cross flew just behind the in-rushing Youssef En-neysri.

Croatia regained the lead in the 42nd minute. They appeared to have lost the initiative on a counter-attack but Morocco failed to clear their lines and Kramaric freed Orsic for a curling side-footer which clipped the far post before dropping into goal.

The second half lacked similar quality albeit disrupted by substitutions. Orsic had a shot deflected for a corner, substitute Nikola Vlasic shot over the bar, Gvardiol was denied a blatant penalty after being tripped by Amrabat and Mateo Kovaic dragged a shot wide across the face of goal.