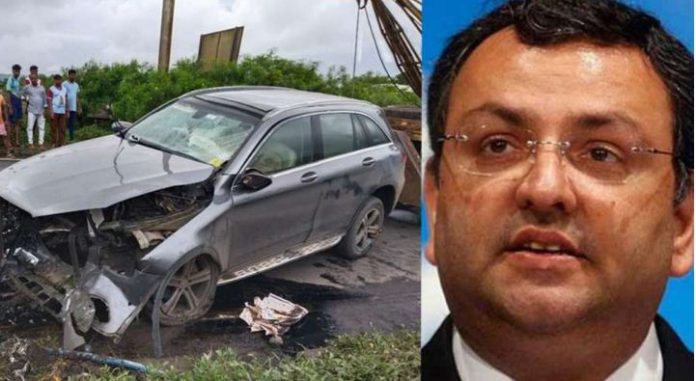 Cyrus Mistry, 54, the Shapoorji Pallonji Group head and former Chairman of Tata Sons, who died in a car crash near Mumbai on September 5, was a soft spoken man, a likeable business head honcho, a quietly performing Parsi. It has been revealed that while the Mercedes he was travelling in with family friends – returning from a holy Parsi site in Gujarat’s Udwada – was speeding excessively he was not belted down in the rear seat.

Initial report by the police said that as the car hit a road barrier at full speed, even as the airbags deployed, the unbelted rear seat occupants – Cyrus and Jehangir – suffered fatal impacts. Front seat occupants, Mumbai-based gynaecologist Anahita Pandole (the driver) and her husband Darius were belted and though injured, survived the massive impact. They were later airlifted to a Mumbai hospital. Anahita has suffered hip fracture while Darius had jaw fractures causing airways obstruction, according to a doctor.

Video footages released showed the front of the car completely mangled with the engine pushed inwards on impact. Anahita was probably driving the Mercedes GLC car at breakneck speed, initial police reports said. The immense impact killed Cyrus and Jahangir on the spot, the entire thing possibly happened through an “error of judgement” by the driver, the police says.

Police in Maharashtra’s Palghar district have obtained the CCTV footage of the ill-fated Mercedes car in which Cyrus Mistry was travelling to Mumbai, shortly before it crashed, killing him and his friend, an official said on Monday. The footage shows the car passing through the Dapchari check post in Palghar district at 2.21 pm on Sunday, he said.

The car hit a road divider on a bridge over the Surya river on the Mumbai-Ahmedabad Highway at around 3 pm. The police team probing the crash are examining the CCTV footage for further leads, the official said.

The luxury car covered 20 km of distance in just 9 minutes after crossing the Charoti check post in the Palghar district, 120 km away from Mumbai.

Mercedes officials on September 5 visited the spot in Maharashtra’s Palghar district and inspected the car they were travelling in. “Just as an aircraft has a black box, these Mercedes cars have a chip that can give details of the speed and can provide vital information on the accident. The Mercedes team that inspected the car also told us they will give us a report on the response of the vehicle,” district superintendent of police Balasaheb Patil said.

Double tragedy
This was the second successive tragedy for the Pallonjki family. Cyrus’ father and chairman of the Shapoorji Pallonji Group, Pallonji Mistry, had passed away on June 28. The construction mogul, aged 93, passed away in his sleep at his Mumbai residence.

Pallonji was often known as the ‘Phantom of Bombay House’ in the Tata Group. He was also awarded the Padma Bhushan in 2016 for his contributions in the field of trade and industry. Pallonji Mistry was the largest stakeholder in the Tata Group with 18.4 per cent holding in the conglomerate besides being the chairman of the Shapoorji Pallonji Group through which he owned Shapoorji Pallonji Construction Limited and Forbes Textiles.

A day after Cyrus Mistry’s death in the car crash, Union Road Transport and Highways minister Nitin Gadkari, at a media event, attributed some of the road accidents to faulty project reports and stressed that companies need proper training for preparing detailed project reports for construction of highways and other roads. He said the government is encouraging use of new technologies.

“Some DPRs (Detailed Project Reports) prepared by companies are the worst and are responsible for road accidents in the country,” Gadkari, who is known for his frank views, said at an event in Delhi. He underlined the need for organising training programmes for companies preparing DPRs.

The last rites of Cyrus Mistry took place at Worli crematorium. Most of Mistry’s family members live abroad and reached Mumbai soon after the death.

The post-mortem report of Cyrus Mistry has revealed polytrauma major injuries to vital organs as the cause of death. The JJ Hospital administration completed the post-mortem at 2.27 am on September 5 and has sent the report to the Casa police station, the local police station where the accident took place.

Insurance
Meanwhile, some troubling issues have arisen with the news that the backseat occupants (both of whom died) may be denied their insurance. However, a media report has quoted lawyer Dipak K Nag, a lawyer who deals with cases of motor accident claims, as saying: “There is no law which says that if a person doesn’t wear a seat belt and is killed or injured in a road accident, he or she will not get compensation. In such cases, the tribunals or courts will go into the causes and may hold flouting of the seat belt rule a contributing factor to the fatality or injury. The tribunals or courts may then be inclined to award a lower compensation.”

Mistry, who was the sixth chairman of Tata Sons, was ousted from the position in October 2016. He had taken over as the chairman in December 2012 after Ratan Tata announced his retirement. N Chandrasekaran later took over as Executive Chairman of Tata Sons.

Backgrounder
Born on July 4, 1968, Cyrus earned a civil engineering degree from London’s Imperial College of Science and Technology and a postgraduate degree of Master of Science in Management from London Business School. He joined the family business in March 1991 as a Director, overseeing the group’s construction business described himself as a voracious reader of business books and golfer and shared his family’s love of horses.

The Supreme Court in May had dismissed a plea of the Sapoorji Pallonji (SP) group seeking a review of the 2021 verdict which had upheld the Tata group’s decision to remove Cyrus Mistry as the executive chairman of the Tata Sons.

Mistry’s grandfather first bought shares in Tata Sons in the 1930s. The Shapoorji Pallonji (SP) Group, founded by Mistry’s father, currently holds a near 18 percent stake, making it the largest single shareholder in a firm mostly controlled by trusts.