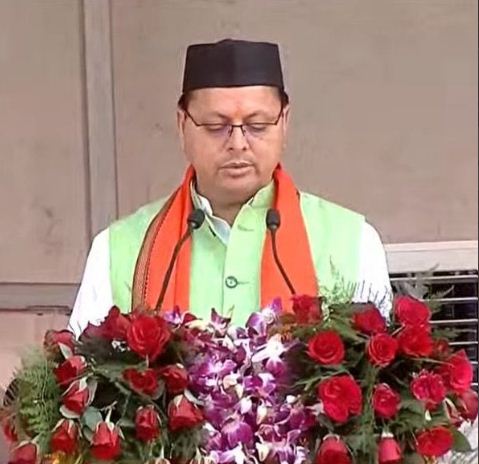 On Wednesday (March 23) Pushkar Singh Dhami took oath as the chief minister of Uttarakhand for a second consecutive term. It was a mega swearing-in ceremony in Dehradun’s Parade Ground. Eight cabinet ministers were also administered the oath.

Prem Chand Aggarwal, who was the Speaker in the previous legislative assembly, took oath in Sanskrit.

Dhami, who lost from the Khatima constituency in the recently held Uttarakhand, led the party’s poll effort as chief minister during the polls.

Dhami had lost to Congress candidate Bhuwan Chandra Kapri from Khatima by a margin of 6,579 votes in the state polls. He got a total of 41,598 votes with a vote share of 44.8 percent against Kapri, who got 48,177 with 51.89 per cent votes. Dhami had won twice from the seat. The BJP won the popular mandate for the second consecutive term in Uttarakhand and won 47 seats in the 70-member assembly.