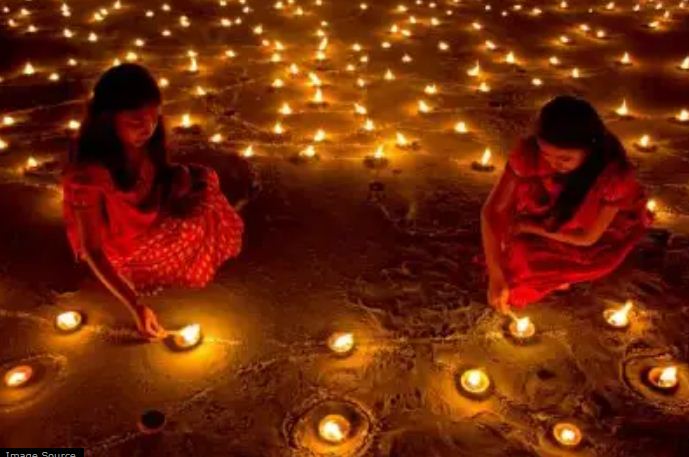 This is a time for feasts, prayers and often fireworks. Diwali of Dipavali rates as one of the most important traditional festivals of India, dating way back in history. In this Festival Of Lights people light oil lamps or candles to symbolise the triumph of light over darkness or good over evil.

These oil lamps or diyas, illuminate homes. People also decorate their homes with flowers and rangolis – traditional designs made using colourful powders – outside their doors to welcome good luck and positivity into their lives.

The exact dates of the festival change each year and are determined by the position of the moon, but it typically falls between October and November. This year, Diwali was celebrated on October 24.

For the past two years, due to the Covid-19 pandemic, festivities were held with restrictions or were cancelled altogether. However, this year, with restrictions being lifted, people are celebrating the festival with gusto.

The widely-celebrated festival also brings with it concerns about the rising levels of air pollution, hence in the National Capital this year fireworks were completely banned.

It has to be remembered that while most of north India celebrate this as Diwali, parts of eastern India, such as West Bengal, enjoy this time with the Kali puja. That may not be as big a festival in Bengal as Durga Puja, but it is celebrated with gusto and a lot of fanfare, sweets, fireworks and festivities.

History and origin
In ancient India, Diwali was mainly celebrated by farmers as a harvest festival, coming soon after they harvested their crops between October and November. The farmers faced a huge threat from insects that destroyed the crops. So, the farmers started lighting diyas in order to attract the insects and then they would kill them. This proved to be quite successful as their crops remained safe and they were now able to enjoy the benefits of a good harvest.

Apart from this, the festival of Diwali also holds great importance in Hindu mythology. It is said that on this day Lord Rama returned to Ayodhya with Sita and his brother Laxmana after spending 14 years in exile and defeating the evil King Ravana. It is said that the people of Ayodhya organized a grand ceremony on the occasion of their triumphant return. The whole kingdom was lit up with bright lamps, diyas and fireworks. Lord Rama was welcomed in grand fashion and this is how the festival of Diwali came into existence.

Other versions
In some parts of India, the festival of Diwali is celebrated as the victory of Lord Krishna over the wicked demon Narakasura. It is believed that when Narakasura kidnapped more than 16,000 princesses, Lord Krishna defeated him and freed all the princesses.

The Return of Pandavas: As mentioned in Mahabharata, Pandavas defeated the Kauravas and returned from the 12 years of banishment on the day of Kartik Amavasya i.e. Diwali.

For followers of Jainism, a non-theistic religion in India, Diwali “marks the nirvana or spiritual awakening of the spiritual leader Mahavira in 527 BCE,”. Meanwhile, for followers of Sikhism, Diwali marks the day that the sixth of the ten Sikh gurus, Guru Hargobind Ji, was freed from imprisonment in the 17th century.

The five days of Diwali
Being a grand festival, Diwali is celebrated over a period of 5 days, where each day is signified by certain rituals and traditions. The first day of Diwali, popularly known as Dhanteras, marks the beginning of Diwali.

On this day, people clean their houses as well as their workplace. Diyas are placed outside the house, doorways are decorated and beautiful rangolis are made. Since it is considered to be an auspicious day, people also buy new items like clothes, jewellery and furniture.

The second day of Diwali, also known as Choti Diwali, is Naraka Chaturdashi. The celebrations on this day indicate a sense of freedom from all kinds of suffering. A wide variety of sweets are prepared and distributed among relatives and friends.

The third day of the festival is known to be the main day of Diwali. Also known as Lakshmi Pujan, devotees welcome Goddess Lakshmi into their homes. They worship her and ask for her blessings. This is a day of celebration and joy as people burst crackers and meet up with their relatives and close friends.

The fourth day of Diwali is the Govardhan Puja. It is a celebration of that time when Lord Krishna lifted the Govardhan Mountain on his little finger, to save the cowherd and all the farmers from dangerous floods.

The fifth and final day of Diwali, also known as Bhai Dooj, celebrates the beautiful bond shared by brothers and sisters. This is again a day of celebration and excitement, as brothers meet their sisters and offer them several gifts.

Diwali, as celebrated in different parts of India
North India
(Himachal Pradesh, Uttarakhand, Uttar Pradesh, Rajasthan, Srinagar, Delhi and Punjab), the Dipavali festival is celebrated with fireworks, lights, and sweets. Lord Ganesha and goddess Lakshmi are also worshipped in Hindu homes on this day. If you’re in the Capital, you shouldn’t miss the Diwali Mela in Delhi that lets you buy decor and food items for the festival and for the best Diwali celebration in India.

East India
As said before, in West Bengal, Bihar, Jharkhand, Assam, and Odisha, Diwali celebrations are mainly the night of ancestors, and earthen oil lamps are lit on poles to guide the souls of the departed loved ones to heaven.

The celebrations in West Bengal differ a little from the celebrations in the rest of the states adding to its exclusivity. For instance, the main day or the third day of Diwali, is referred to as Kali Puja. The Bengalis worship Kali Mata as opposed to worshipping Lakshmi like most of the other states. The lamps that are lit in temples and houses on Diwali are in honour of Goddess Kali and her power to destroy all evil. Goddess Kali represents the destruction of evil, and is more dreaded than respected.

Kali Puja is also known as Shyama Puja and Mahanisha Puja in some of the other Indian states worshipping Kali on Diwali. The tradition of worshipping Kali Ma on Diwali is not very old. Before this, Diwali celebrations in West Bengal were similar to what it was in the rest of the country. In the late 17th century, Kalika Mangalkavya by Balram – a religious text devoted to Goddess Kali was discovered. It depicts an annual festival dedicated to Kali each year. It was during the 18th century that the tradition was started by King Krishnachandra and later carried on by his grandson Ishwarchandra to worship Kali on Diwali day.

The people of Bihar and Jharkhand perform Lakshmi puja in the evening and women make rangolis on the verandah of their homes and temples. For witnessing Diwali in India, visit any of these places.

In west India
In Gujarat and Maharashtra, rangoli is an important part of Diwali decoration. While Gujaratis draw footprints of goddess Laxmi on the threshold of the house, light their homes with candles, rice lights, and diyas on the night of Diwali, Maharashtrians perform Lakshmi puja in their homes and organize a feast known as “Faral” for families and friends, where sweets like karanji, ladoo and snacks like chakli and sev are served.

In south India
Andhra Pradesh, Karnataka, and Tamil Nadu have their own versions. While Andhrites and Tamilians worship Lord Krishna and his wife Satyambha’s victory over the demonic King Narkasura, Kannadigas take oil baths and build forts from cow dung in their homes.

Diwali celebration around the world
Diwali is an occasion of joy, merrymaking, and togetherness for Indians around the world. While the festival is celebrated on a grand scale throughout the country, it is also celebrated in other countries with large Hindu populations that include Nepal, Sri Lanka, Mauritius, Singapore, Myanmar, Indonesia, Britain, Malaysia, Thailand, Guyana, Japan, Fiji, Trinidad and Tobago, Africa, and Australia. So, if you want to celebrate the festival some other way, visit any of these international destinations on Diwali with your loved ones.

Importance of Diwali
Diwali celebrations have become an integral part of Indian culture. It is celebrated all over the country and is known as the festival that brings people closer together. People also love gifting special items to their loved ones on the occasion of Diwali.

Houses are illuminated by earthen diyas as well as artificial lights. It is also a time where many people donate clothes and other items to the poor and needy. This symbolizes the true meaning of Diwali, as we try to in need and drive away the darkness from their lives as well.

Traditional sweets to eat to celebrate Diwali
Sweets, called mithai, are a big part of the Diwali festival – you’re even meant to offer them to the gods at the temple. After they’re offered to the gods, they can be enjoyed by other prayer goers, followed by friends, family and the people who made them.

If you are also the one looking forward to Diwali mostly to satiate your sweet tooth, we’ve got some of the best traditional sweet delights with recipes right here! Think of decadent gulab jamuns, quintessential kaju katli, luscious kheer and a lot more.