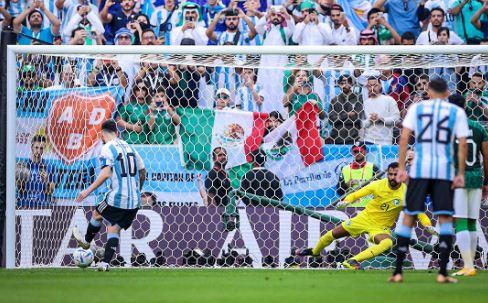 Lionel Messi and Argentina’s 35-match unbeaten streak came to an end with a humiliating 1-2 defeat to Saudi Arabia in their opening fixture of the FIFA World Cup 2022 on November 22.

Saudi Arabia, thus, pulled off the first big surprise of Qatar 2022, as they grounded one of the tournament favourites at the Lusail Stadium.

This leaves Argentina in a critical spot, now having to pull off some impressive wins against Mexico (November 26) and Poland (November 30). That alone would allow Argentina to move ahead in the tournament and provide Messi a great farewell from the international arena.

Saudi Arabia bounced back from conceding an early Lionel Messi penalty to produce one of the greatest World Cup shocks thanks to a Saleh Al-Shehri equaliser and a sublime Salem Al-Dawsari winner in Doha.

Denmark held
Substitute Andreas Cornelius hit the post and Denmark had a late penalty appeal turned down as they drew 0-0 with Tunisia in their World Cup Group D opener at Education City Stadium on November 22. Tunisia were roared on by their sizable following in the 42,925 crowd, whose deafening whistles and roars gave energy to their side and helped secure what had seemed an unlikely point before kickoff, despite the fact they are unbeaten in nine of their last 10 internationals.

Mexico draw with Poland
Guillermo Ochoa blocked a penalty by Robert Lewandowski as Mexico and Poland settled for a 0-0 draw in their FIFA World Cup 2022 Group C opener, at Stadium 974 in Qatar on November 22. Alexis Vega and Hirving Lozano were in brilliant form for Mexico but failed to find a late winner, as Poland defended deep through the match. Meanwhile, Lewandowski could have won the match for Poland after getting fouled in the box during the second-half.

Ochoa was at his brilliant best to block the Poland captain’s penalty. The draw will be good news for both Saudi Arabia and Argentina in Group C, with the Arab country grabbing a win against Lionel Messi and Co.

Poland, on the other hand, are making their second successive World Cup appearance after not qualifying for the 2010 and 2014 World Cups. They failed to make out of the group stage in 2018, and will hope that their star player Robert Lewandowski can increase his international goals tally from 76 and inspire them to the knockout stages.

Poland face Saudi Arabia next on November 26 before finishing their round of group matches against Argentina.