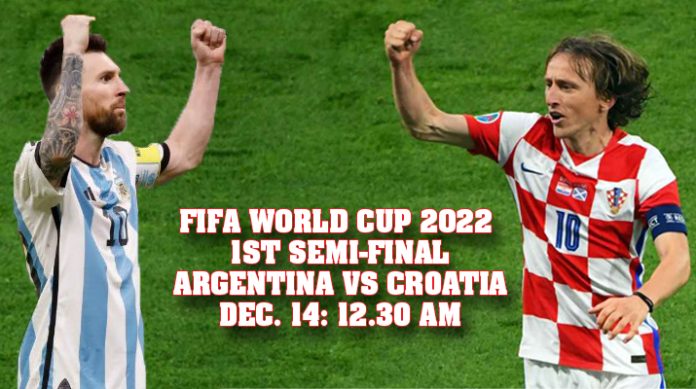 Croatia has already taken the heart out of the Qatar 2022 FIFA World Cup, having beaten Brazil on penalties in the quarterfinal, leaving Neymar in tears. Fans in India would not forgive Luka Modric and his boys for that. Now Modric & Co come up against Argentina, the second favourites to win the Cup, in the first semi-final and he has superstar Lionel Messi to contend with. This is going to be a nail-biter.

Yet, Croatia are no pushovers: they are the 2018 finalists, having lost to France, who are still in the picture. One might even mentally recreate a repeat of the last final.

Messi and his men also moved up with a penalty shootout win over the Netherlands, and they are pretty pepped up for the ultimate fight before the final.

Modric has an entire team performing to potential, while Argentina, though much improved, has still been depending heavily on Messi. Let us be frank, with Neymar gone and with Christiano Ronaldo gone, both in tears, one would expect to at least find the third superstar in the final. Emotions apart, though, the teams look pretty well matched.

Argentina: Rodrigo De Paul has been nursing an injury, but he played his heart out for 66 minutes in the quarter-final with the Netherlands before being replaced by Leandro Paredes. He should be around this time too.

A record-breaking 18 cards were dished out in Argentina’s quarters. That has resulted in two of Scaloni’s players being suspended. Fullbacks Marcos Acuna and Gonzalo Montiel will sit out the meeting with Croatia.

Croatia: Four players went into Croatia’s quarter-final one caution away from a suspension – including the instrumental midfielders Luka Modric and Mateo Kovacic. Zlatko Dalic is expected to have a fully fit and available squad to select from.

Head to head: Argentina and Croatia are on an even footing as far as the head-to-head record is concerned and have won two games apiece out of the five matches that have been played between the two teams. The previous meeting between the two teams at the FIFA World Cup took place in the group stage in 2018 and ended in a 3-0 victory for Croatia.

Argentina could potentially reach the World Cup final for the sixth time in their history – only Germany have bettered them in this regard with eight final appearances.

Nothing is a lot, actually