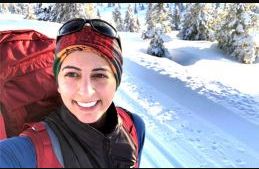 Captain  Harpreet Chandi, an Indian-origin British Sikh army officer, has become the first woman of color to complete a solo trek to the South Pole. Harpreet was accompanied by a physiotherapist. Harpreet, also popularly known as ‘Polar Preet’, announced her achievement on her live blog on January 3, 2022, at the end of Day 40.

By the end of t he 40th day she had travelled 700 miles (1,127 kilometers), while pulling behind her a pulk, or sledge with all of her kit. She did this while she trudged through temperatures of minus 50 degrees Celsius and wind speeds of around 60mph.

she said in her blog: “This expedition was always about so much more than me. I want to encourage people to push their boundaries and to believe in themselves, and I want you to be able to do it without being labeled a rebel. I have been told no on many occasions and told to ‘just do the normal thing’, but we create our own normal.”

Alka Mittal is a post-graduate and a doctorate in commerce. She became the first woman to join ONGC’s board on November 27, 2018.

ISRO has a new chairman
Senior rocket scientist S Somanath has become the new Chairman of the Indian Space Research Organization (ISRO), succeeding K. Sivan. Somanath was Director of the Vikram Sarabhai Space Center (VSSC) in Thiruvananthapuram. He becomes the fourth Keralite to occupy the topmost post in ISRO.

At the ISRO, was associated with the Polar Satellite Launch Vehicle (PSLV) Project during its initial phase. Later he became the Associate Director (Projects) of the VSSC and also the Project Director of the GSLV Mk-III launch vehicle in 2010. He was also the Deputy Director of Propulsion and Space Ordinance Entity till November 2014.

In June 2015, he took over as Director of the Liquid Propulsion Systems Center (LPSC) at Valiamala, Thiruvananthapuram, and served there until January 2018.

She took over command from Capt Walt Slaughter during a ceremony last August. Bauernschmidt said: “There is no more humbling sense of responsibility than to know you are entrusted with the care of the people who have chosen to protect our nation. Thank you, Capt. Slaughter, for turning over the finest ship in the fleet.”

Before this, Bauernschmidt had served as the commanding officer of Helicopter Maritime Strike Squadron 70 and the amphibious transport dock San Diego. She has completed more than 3,000 flight hours during her career.

Elon Musk is Time magazine’s 2021 Person of the Year
Time   magazine has named Elon Musk as its Person of the Year 2021. Musk, the initiator of Tesla Motors, but now better known as the founder and CEO of space exploration company SpaceX, has been at the forefront of innovation as well as American entrepreneurship.

It is also a matter of fact that recently he passed Amazon founder Jeff Bezos as the world’s wealthiest person. Forbes estimates his wealth at $265.4 billion, way ahead of the rest of the super rich pack.

Today, Musk is at the forefront of American space exploration’s private arm, his Spacex, having won an exclusive National Aeronautics and Space Administration award in April. Said Time: “Musk’s rise coincides with broader trends of which he and his fellow technology magnates are part cause and part effect.”