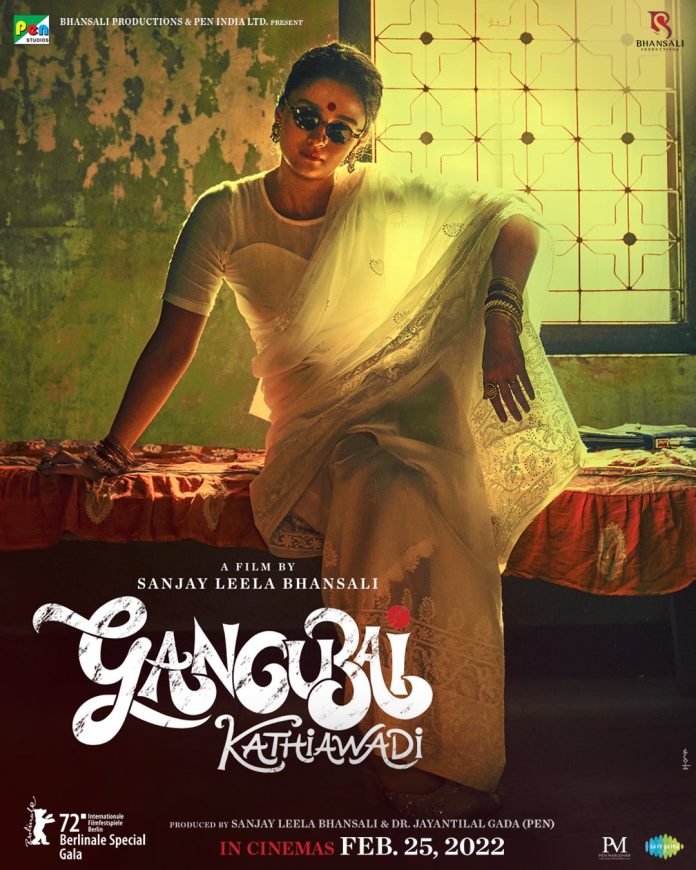 The life of Gangubai Kathiawadi is as poignant as it is inspiring. It is the story of a girl, betrayed in love, and a prostitute, who chose a higher path and became the face of the oppressed, even getting the opportunity of a meeting with prime Minster Jawaharlal Nehru. She was also one who made gangster Karim Lala her rakhi brother and ruled the underworld.

It is as extraordinary a film as her life was, probably and has already raked in millions. All these started in the early 50s and it is based on a true life story. Recent court cases have been overcome, and the release had been smooth.

Alia Bhatt plays Ganga Harjivandas is a resident of Kathiawad. Her father is a barrister and she belongs to a well-to-do family. However, Ganga wants to be an actress and her boyfriend, Ramneek (Varun Kapoor), tells her that he’ll help her get a role in a big Hindi film.

She runs away with him to Bombay. In Bombay And just when she was dreaming of starting a new life with her beloved, he betrayed her and sold her for Rs 500 at a brothel., run by Sheela (Seema Pahwa).

This is when Ganga is told that Ramneek has sold her to Sheela for Rs. 1,000. At first, she protests but later gives in and joins the flesh trade. After she sleeps with her first client, something changes in her.

According to S Hussain Zaidi’s book ‘Mafia Queens of Mumbai’, she afterwards started to run a kotha (brothel) in the Kamathipura area of Mumbai and later, many notorious criminals became her customers. One among them was the infamous Karim Lala who eventually became her Rakhi-brother as well and gave the command of Kamathipura area to his sister Gangubai and hence she became one of the ‘Mafia Queens.’

This betrayal tore her apart but her new life as Gangubai Kothewali was just beginning. She emerged as a leader to all the people of Kamathipura. Making Mafia Don Karim Lala her brother in the 60s, she ruled over the red light area. She never forced any women to prostitute or work, she tried all the women and children of Kamathipura as her own, she even met the then PM Jawahar Lal Nehru to discuss about the situation of sex workers in India.

She lived one hell of a life and never backed down from a fight. Even though her past was a wreck, she inspired millions of people. Now a movie starring Alia Bhatt is being made in Bollywood to inspire more people of how you should never let your past be who you are.

However, Gangubai never kept a girl in the brothel against her will. And later on Gangubai did a lot of work for sex-works and for the well-being for orphans as well. She even led the movement against the removal of Mumbai’s prostitute market at the same time. Even today, the statue of Gangubai is installed in Kamathipura, Mumbai.

Post release review
The character of Gangubai is very well fleshed out and the same goes for other supporting characters. Prakash Kapadia and Utkarshini Vashishtha’s dialogues are powerful and one of the best in recent times. In several scenes, it’s the hard-hitting one liners that enhance the impact.

The film is inspired from the chapter ‘The Matriarch Of Kamathipura’ in S Hussain Zaidi’s book, ‘Mafia Queens Of Mumbai’. The story is interesting and raises some important issues. Sanjay Leela Bhansali and Utkarshini Vashishtha’s screenplay is entertaining and dramatic. Several films in the past have touched upon the lives of sex workers. But the writers ensure one doesn’t get a déjà vu of these movies.

Alia Bhatt plays Ganga AKA Gangu, who is stripped off her innocence and dreams, when she is brought to Mumbai by her suitor. Forced into the flesh trade, Gangu quickly absorbs the realities of her cruel new world and learns to swing it in her favour. Bhansali begins by

establishing this world and the stark realities of it. We see cramped rooms, the spacious kotha but confined sleeping spaces and narrow lanes that give a bird’s eye view of the small yet teeming world of sex workers.

Alia Bhatt once more delivers an exceptional performance with her flair, recklessness, authority with compassion and above all her dialect that remains consistent. Alia Bhatt delivers arguably the best performance of her career.

Gangubai Kathiawadi’s beginning portions are a bit dark and disturbing. The film gets better once Ganga turns into Gangu. The entire track of Shaukat Abbas Khan and Razia Bai are highly engrossing. All scenes of Rahim Lala give a lot of weightage to the narrative. The romantic track, though a bit weak, has some cute moments. Post-interval, the film drops at places but picks up in the Azad Maidan speech scene and in the last 15 minutes.

Ajay Devgn as Rahim Lala as usual brings his grand persona to the big screen as he rightly stands by his sister Gangubai.

The film’s second half is stronger than pre-interval as punchier dialogues, comedy and lighthearted moments are infused into the narrative. Prakash Kapadia and Utkarshini Vashishtha as dialogue writers definitely hit it out of the park.

Production : It was officially announced in September 2019 and was scheduled for release on July 30,  2021 but it was postponed due to the rising cases and second wave of the COVID-19 pandemic. It was then scheduled for worldwide release in theatres on January 6, 2022 but to avoid clash with S. S. Rajamouli’s RRR, the release has been changed to February 18. Later, the date was pushed back by a week to release on  February 25,  2022.