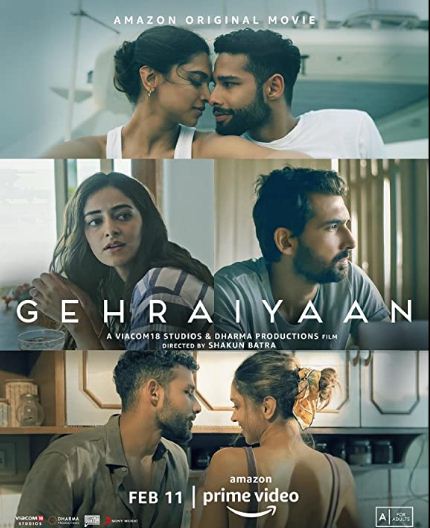 The film is about urban relationships. It stars Deepika Padukone, Ananya Panday, Siddhant Chaturvedi and Dhairya Karwa as leads. The story is about Deepika, Ananya and Siddhant’s characters stuck in a love triangle and struggling to deal with their ‘messed up’ lives.

The ambitious Alisha Khanna, 30, finds herself at a crossroads in life, with her six-year long relationship having grown monotonous. Her career seems to be hitting roadblocks and just when she had begun to accept this reality as unchangeable, her life is usurped by the arrival of her cousin, Tia and her fiancé, Zain, with whom she bonds over a troubled past and a common wish to break from its confines.

The story charts the journey of Alisha and Zain, as they confront the ghost of their past on the path they take to avoid it.

The trailer (now discontinued) opens with Alisha (Deepika Padukone) fighting with her husband Karan (Dhairya Karwa) as she isn’t feeling happy in her life. She finds her husband isn’t supportive enough and doesn’t earn anything. Enters Tia (Ananya Panday), Alisha’s cousin and her fiancé Zain (Siddhant Chaturvedi), who have a relatively plush lifestyle with yachts and more money.

The story further unfolds into Zain and Alisha having an affair and how it further creates a clash between them and others as everyone gradually gets to know about the duo. Turning into a love triangle, Gehraiyaan dives deep into the life of the characters as all of them find themselves standing at complex crossroads of life.

Deepika Padukone has been quoted as saying: “Alisha, my character in Gehraiyaan, is extremely close to my heart and certainly one of the most challenging characters I have portrayed on screen. I am grateful to have had the opportunity to play a role that was fun and challenging at the same time.

Each of the characters’ struggles and arcs are real, raw and relatable. Our endeavor is to take viewers on a journey they will relate to. When it comes to dealing with relationships and human emotion, Shakun is truly a master of his craft.”

Karan Johar of Dharma Productions said: “Depths is a profound, genuine and honest observation of modern relationships. Shakun captures the complexities of human emotion. Their hard work and the honest and powerful performances of the cast have combined to make the film a really compelling story.

We are thrilled to premiere Gahiyaan on Amazon Prime Video. This is our second collaboration with him after ‘Sher Shah’. We are hoping that the film will connect with audiences in India and across the world, as its main theme is love and friendship versus one’s ambition, Lakshya and Sangharsh, whose appeal is universal.”

Director Shakun Batra, who returned to the director’s chair after his super-hit film Kapoor & Sons, said: “Deepheyan is not just a film for me, it is a journey through the intricacies of human relationships; it is a mirror of modern adult relationships.

It shows how we go through the maze of emotions and feelings and how our every step, every decision affects our lives and those around us. It gives me immense pleasure to travel this journey with our amazing team, Dharma Productions, exceptionally talented cast and crew and now Amazon Prime Video.”a prfe review says: “Gehraiyaan navigates through complex modern relations, adulting, letting go, and taking control of one’s life.

It is an intense, real, and honest observation of modern relationships, and Shakun has done a phenomenal job of portraying the complexities of human emotions.”

Production :  Pre-production of the film began in March 2020. Initially, filming was to proceed in Sri Lanka, but, amid the Covid-19 pandemic and subsequent lockdown, the shoot was delayed by six months and moved to Goa, owing to its similar landscapes. The first schedule began in September 2020 and lasted approximately one month.

The team returned to Mumbai, in November 2020, where filming resumed for another month. Shooting for the next schedule commenced in Mumbai at the end of March 2021. Filming was wrapped up in August 2021. After being known as Production No. 70 for two years, a teaser was released on December 20, 2021, revealing the title of the film as Gehraiyaan.