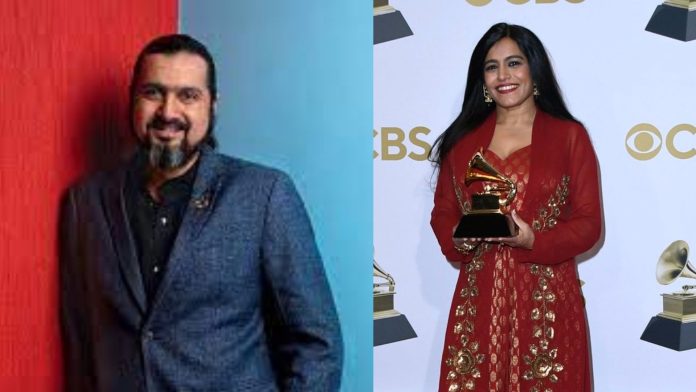 Indians have been pretty much present on the Grammy Awards podium. This year two Indian-Americans won at the 64th Annual Grammy Awards, given out to musicians. This happened on Sunday night (April 3) in Las Vegas.

At the MGM Grand Garden Arena in Las Vegas, Nevada, the awards ceremony was hosted by Trevor Noah. At the event, singer Olivia Rodrigo made an impressive Grammy debut, Silk Sonic claimed two major awards and Jon Batiste had the most stunning victory of the night winning the top prize at Grammy Awards.

Winning the hallowed gramophone was New York-based Falguni Shah, or just Falu, who won the Best Children’s album for A Colourful World (El Cerrito Records). The album stemmed from her struggles to explain racial equity to her child, who is brown and studies with kids from varying ethnicities.

She said: “So we made a song about being brown or what our real identity is. The story was simple – the crayons are all of different colours, but they live in one box together, peacefully. I wanted to show him that being brown is alright. And music gets through to kids in a much easier way. When you talk to your kids through songs and happiness, it easily penetrates their minds as compared to lectures.”

Falu beat Mexican duo Lucky Diaz and the Family Jam Band (Crayon Kids), Spanish musicians 123 Andrés (Actívate), 1 Tribe Collective (All One Tribe) that features 26 artistes from a black family, and American politician, musician and academic Pierce Freelon (Black to the Future) to win the award. She walked up the stage in a red brocade and embroidered gown along with her son and two other kids who are a part of the album. In 2019, Falu was nominated for Falu’s Bazaar, also an attempt to reassure her son of his roots and identity.

What did she say? “I have no words to describe today’s magic. What an honour to perform for the opening number of the GRAMMY Premiere Ceremony, and then take home a statue on behalf of all the incredible people who worked on A Colorful World,” she wrote in the caption of her Instagram entry.

The singer is currently based in New York and has been nominated for a Grammy Award in the past in the Best Children’s Music Album category.

Kej’s first win had come at the 57th Grammy ceremony in 2015 for Winds of Samsara a collaboration with South African flautist Wouter Kellerman. The 14-song album began with tributes to their respective fathers of the nation Mahatma Gandhi and Nelson Mandela and went on to explore other aspects of Indian and African music.

Born in the US, Kej grew up in Bengaluru as his family moved to India when he was eight. He went to the famous Bishop Cotton Boys’ school, where he taught himself how to play the keys and guitar. He was studying to be a dentist in college when he decided that music was what he wanted to do for the rest of his life. Though Kej’s parents weren’t interested in the idea, he decided to formally learn Hindustani classical music and western music — a lot of it by imbibing music from Pakistani musician Ut Nusrat Fateh Ali Khan and British vocalist Peter Gabriel.

For a brief period of time, he was the keyboardist for Angel Dust, a Bengaluru-based progressive rock band. He began his career with jingles and has composed a plethora of them, for brands such as Google, IBM, McDonald’s, Pepsi and Air India, among others. It was while working on advertising jingles that Kej was fascinated by the idea of merging new age music with world music, which touched upon classical, jazz, electronic or a mix of it all.