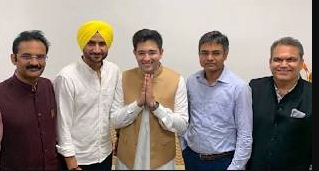 Former Indian off-spinner Harbhajan Singh, aka the ‘Turbanator’, was nominated for elections to the Rajya Sabha by the new Aam Admi Party government in Punjab. This is a good response by the party, to Navjot Singh Sidhu of the Congress.

Harbhajan made his debut in 1998, played 103 Tests, 236 ODIs and 28 T20Is for India. He was also part of India’s historic Cricket World Cup 2011 triumph. However, after the 2011 World Cup, he lost his place in the team and has played a handful of matches since. He last played Test and ODI for India in 2015 and T20I in 2016. However, he was regularly playing in the Indian Premier League (IPL) and his last stint was with Kolkata Knight Riders in IPL 2021.

The Arvind Kejriwal-led Aam Aadmi Party (AAP) won 92 of Punjab’s 117 assembly seats in the recently concluded elections and 5 seats of Rajya Sabha will fall vacant on April 9 and names are required to be submitted by Monday, March 21 for elections. Elections will be held on March 31.

Tata Sons chairman Natarajan Chandrasekaran was appointed as chairman of Air India on March 21. This is as per tradition of the Tata group. The development came days after Ilker Ayci, former chairman of Turkish Airlines, turned down the Tata Group’s offer to be the chief executive officer and managing director of Air India.

The home-grown airline was bought back by the Tatas in a $2.4 billion equity and debt deal in October last year following 69 years of state ownership.

Before heading Tata Sons, Chandrasekaran was chairman of Tata Consultancy Services. He is the third non-Tata, after Nowroji Saklatwala and Cyrus Mistry, to hold the position.

The 58-year-old Tata veteran had started his career as a software programmer in 1987. He rose through the ranks to take the top job when he was just 46 and became one of the youngest CEOs in the Tata group. In 2016, he joined the board of Tata Sons and took over as chairman in 2017.

Neeraj, the reigning Olympic javelin throw champion, stated that his tryst with the sport started as a fitness routine. “We athletes will continue to work hard, and try to take our country to the top of the world,” Neeraj said.

Weightlifter Mirabai Chanu, who won the silver medal at the Tokyo Olympics, received the Sportstar of the Year (Female) award. Mirabai was unable to attend the event.

“Dr. Jha is one of the leading public health experts in America, and a well known figure to many Americans from his wise and calming public presence. And as we enter a new moment in the pandemic — executing on my National COVID-19 Preparedness Plan and managing the ongoing risks from Covid — Dr Jha is the perfect person for the job,” Biden said.

Dr Jha will take over the role at a time when close to a million Americans have died from Covid-19. The US has just witnessed a wave of the Omicron variant, even as news of a new sub-variant BA.2 — causing surges of the pandemic in Europe is being watched closely.

Former finance secretary Debasish Panda took charge as the new chairman of the Insurance Regulatory and Development Authority of India (IRDAI) on Monday (March 21). The appointment of the IRDA chairman comes nearly nine months after the vacancy was created following Subhash Chandra Khuntia completing his term in May last year.

Panda, a 1987-batch IAS officer of the Uttar Pradesh cadre, retired as financial services secretary in January this year after a two-year stint. In April 2021, the finance ministry had invited applications to replace Khuntia. The government last week had appointed Rakesh Joshi, former executive vice-president and group head (debt capital markets) of State Bank of India Capital Markets, as a whole-time member (finance and investment) of IRDA.