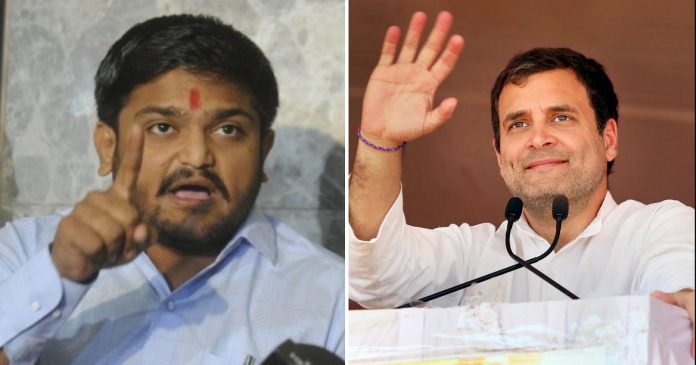 Hardik Patel has been in touch with the BJP leadership over the past two months and is likely to join the party within a week, sources say Finally, Gujarat Patidar leader Hardik Patel has quit Congress and will join the BJP in a matter of days. The idea of Congress using a Patidar leader to boost its position ahead of the polls has now crashed. It has been BJP’s win, as well as Hardik’s who has been denied his pound of flesh so far in the Congress, despite having stirred the hornet’s nest more than once with his public positions.

What thoughts transpired at Congress’ recent Chintan Shivir is known only to the people who tried to think, but surely wining elections and creating a major base was not among them. There may have been big differences between the Congress and Patel, but in politics there is always scope for change and course-correction. The Congress thought process has not changed, that’s clear.

In his resignation letter Hardik thrashed his once mentor Rahul Gandhi – it was Rahul who had inducted him into the party in 2019 – saying that the party’s top leaders were ” distracted by their mobile phones” and that the Gujarat Congress leadership was more interested in ensuring “chicken sandwiches” for them.

The BJP, on the other hand, managed its local committee and made it change its stance on Hardik. The last straw was Hardik not being able to meet Rahul when the latter visited Gujarat. Hardik said: “When I met top leaders, they seemed distracted by their mobile phones and other issues as opposed to listening to issues concerning Gujarat.”

He added: “Our leader was abroad when he was needed in India during critical times.” That was a strong hit at Rahul’s penchant at flying out of the country, apparently for no reason, even when critical party issues needed him around.

Hardik joined the Congress in 2019, just before the Lok Sabha election. He was made the Working President of the Congress in Gujarat, a post that he said had meant little in his years in the party. He had been complaining over the past few weeks about the Gujarat Congress leadership sidelining him and had compared it to the feeling of a “groom forced into nasbandi (vasectomy)”. The Congress has lost another base in Gujarat.