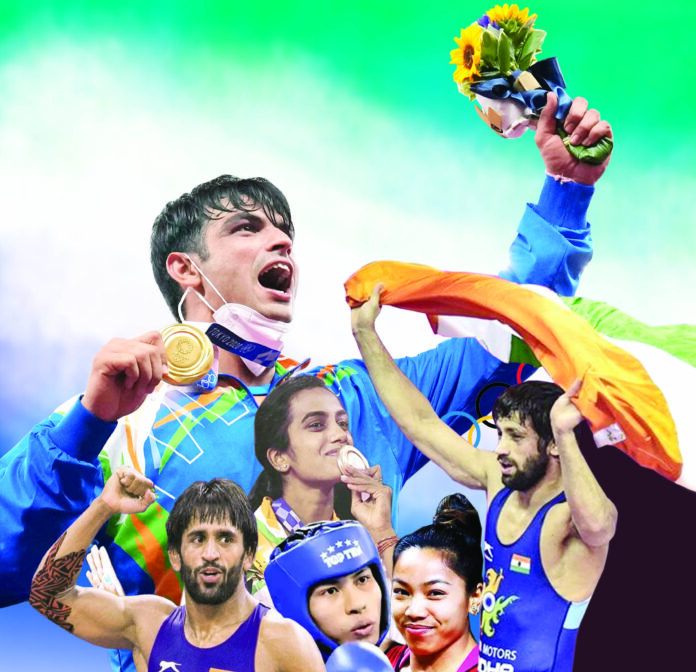 By Views on News Sports Team

One gold, two silvers and four bronze medals, a total of seven at the Tokyo Olympic Games, beating India’s London Olympics haul of 6 is a huge lift for Indian sport. Most important was the gold from 23-year-old Neeraj Chopra in javelin, a feat that proved that Indian athletics (track and field is slowly coming of age). Neeraj, and the silver winners are the toast of the nation today, but one must not forget that in clinching bronze, Indian men’s hockey has brought our national sport back to the limelight, after 41 years in the wilderness.

Also important was the semi-final presence of India’s women’s hockey team, a statement of women’s empowerment as strong as any. In this issue, we look into our new sporting heroes, our future. Apart from the medal winners, we decided to include profiles of the entire women’s hockey squad, simply to stress on the immense hardship each girl has gone through in life, most coming from impoverished families, lifting women’s hockey to Olympic levels.

Looking ahead at the Paris Olympic Games, just three years from now, one can expect more; more in hockey, more in athletics, more in badminton, more in boxing and wrestling, we look forward to bigger participation from our women and towards world standards.

At the same time, our shooters failed, en masse, belying their world beating labels. Instead of the usual blame game that follows each sporting debacle, there is need for some serious soul searching within shooting fraternity. Why do we manage success at world levels, but fall prey to Olympic nerves? The Indian shooting armoury is strong enough to produce more Abhinav Bindras, Rajyavardhan Singh Rathores and Gagan Narangs. We need to identify what went wrong.

The other big ‘mystery’ so to say, is our archers. Deepika Kumari went to Tokyo as a world champion and as World No. 1. She failed miserably. At every Olympic Games, our archers, who had previously earned massive fame at world championships, fail miserably. That makes us doubt the very standards of such world championships. Why must India carry passengers at public cost? There should be a serious investigation into this.

Women’s boxing has come of age in India. Today, we can proudly say that India can, in future, produce more MC Mary Koms. Lovlina Borgohain proved that again.

The same with women’s wrestling; frankly, with wrestling in general. There is a general belief that wrestling, an ancient sport, was invented in India. However, the Iranians also hold that belief, historical evidences of wrestling as a sport being there from ancient Mesopotamia as well. This sport needs further nurturing, with modern training methods and more facilities.

Read on, for stories of success.

2. The men’s 4x400m relay team finished Ninth in the final, The team clocked an area best 3:00.25 seconds, the team beat the Asian record of Qatar which had clocked 3:00.56 seconds. Against India which had clocked 3:01.85 seconds. The team members were: Muhammed Anas Yahiya, Tom Noah Nirmal, Rajiv Arokia and Amoj Jacob.

The following are the Olympic Games medallists of India over the years. We have included the hockey teams as well. The entire gamut of winners is a treat for the eyes,a matter of pride for Indians.

1928 Amsterdam Olympics: Beat The Netherlands 3-0 in the final. India’s first gold medal ever at the Olympics.

1936, Berlin: The Dhyan Chand-led Indian side completed a hat-trick of golds, beating Germany 8-1 – the biggest margin in Olympics hockey finals – in front of their home crowd in Berlin in 1936.

1948, London: India continued their domination in the Games despite the 1940 and 1944 Games getting cancelled due to the World War. This was India’s first medal in Olympics after independence and what made it sweeter was the fact that they had beaten Great Britain 4-0 in the final.

1952, Helsinki: Balbir Singh Sr scored five goals in the final against The Netherlands as India won their fifth straight gold medal at the mega event.

1956, Melbourne: In what marked as the beginning of the battle between the arch-rivals, India beat neighbours Pakistan 1-0 in the final.

1964, Tokyo: India came back strongly after losing to Pakistanin the in the Rome Olympics (1960), to again beat Pakistan in the final to regain gold.

1980, Moscow: India’s last gold. Played in a round robin format, India beat Spain in the final to claim their 8th gold medal in Olympics.

1968, Mexico City: This was the first time that the Indian hockey team failed to make the final of an Olympic Games. They were beaten by Australia in the semi-final and had to settle for bronze after beating West Germany.

1972, Munich: India once again failed to make it to the final, after they were beaten by Pakistan in the semi-finals. India beat Netherlands to claim their second bronze. 2021, Tokyo: India beat Germany 5-4 to bag their 12th medal in the Olympics – a bronze – after 41 years.