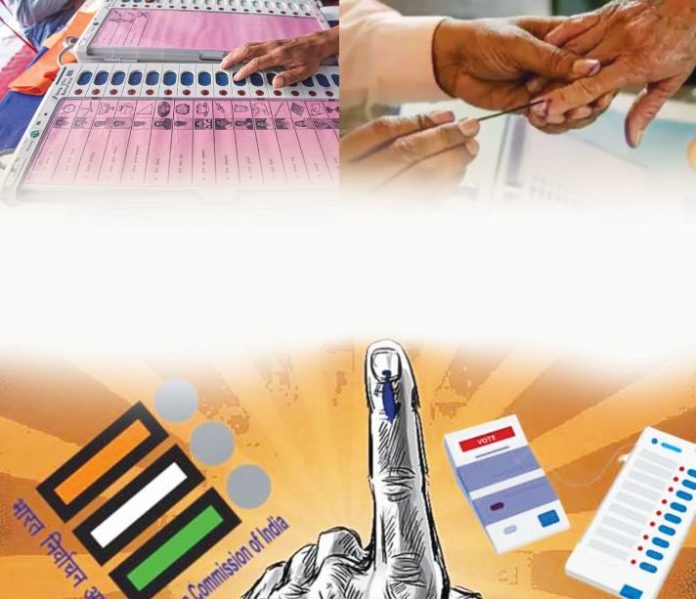 Building up to the 2024 Lok Sabha elections, every single election process – whether it be for the state assembly, of a municipality, or even a panchayat – has become critical for the ruling Bharatiya Janata Party (BJP) at the centre, the Congress and all opposition parties. In this backdrop, the ensuing elections to Himachal Pradesh and Gujarat (Prime Minster Narendra Modi’s home state) have assumed larger than life proportions.

It is pertinent to look into each state and the prospects therein, of the BJP and the opposition parties. The BJP runs governments in both states.

Let us begin with the Himachal Pradesh assembly, elections to which will be on November 12, with counting on December 8. This was the first announcement of the Election Commission of India (ECI). While it has been a tradition at the ECI to announce election to both states simultaneously, this time, quite surprisingly, the Gujarat dates are yet to be announced. The ECI has come in for criticism for this by opposition parties, but the ECI has no spine left to even provide a proper answer, leave alone take a strong stand. Chief Election Commissioner Rajeev Kumar had little by way of explanation, except saying that the election dates to Gujarat will be announced later.

Himachal Pradesh
Elections to this state will take place on November 12 in single-phase polling for all 68 constituencies. The Model Code of Conduct came into effect in the state on October 17. The filing of nomination for candidates began that day and continued till October 25.

The critical voting category in Himachal this year is one of first-time voters, who are 1.86 lakh strong. Among other, less important pieces of statistics, there are 1.22 lakh who are aged 80-plus and 1,184 voters who are above 100 years of age.

Those first time voters could hold the key to stability and could either swing votes towards anti-incumbency or otherwise. Recent issues are price rise and unemployment, both raging across both states, as they are across all of the country. Stories of a world going towards a recession are not going to melt the ice this time around. The basic requirement of such first-time voters is a job or a steady income and an environment of stability.

That is one reason why the ECI listened attentively to the ruling BJP order and delayed its announcement of  the dates for Gujarat, so that the model code of conduct comes into play later, leaving time for the Prime Minister to announce projects for the state.

During the announcement, CEC Kumar told the media: “To the festive month of October, we are going to add the festival of democracy.” That democracy today isn’t exactly “festival”, is something Kumar possibly knows better than all.

Campaign song
In Himachal, Union Home Minister Amit Shah has already launched the BJP’s campaign song for the assembly elections. At a rally in the Sirmaur district of Himachal Pradesh, he announced that ‘Himachal ki pukaar phir BJP sarkar‘ would be the song.

At the rally he was basically addressing the Hati community of the area, influential as they are. Said Shah: “Himachal Pradesh is going to set a new custom, ‘ek baar BJP, baar baar BJP’.”

He added: “In Uttarakhand, Congressmen used to talk about the change of rule in alternative terms. But such customs were not followed and the BJP government was formed with a two-thirds majority.”

The election mix has become interesting with the entry of the Aam Aadmi Party. Expert election analysts claim that they might make things easy for BJP. The AAP is moving fast in the state and is reaching people even in remote areas.

In the 68-member Himachal Pradesh Legislative Assembly election, the BJP defeated the Congress and won 44 seats, while the Congress secured only 21 seats in 2017.

The alternating factor
Since the 1980s, Himachal Pradesh has had a track record of voting out the party in power every five years. This time, the BJP is banking on Prime Minister Narendra Modi and the work done by the Jairam Thakur government to break that cycle.

The Congress, on the other hand, is relying on former CM Virbhadra Singh’s wife Pratibha Singh and son Vikramaditya to lead it back to power. The opposition party will be without Virbhadra, a six-time CM who died last year.

Currently, in the assembly, the Jairam Thakur-led BJP regime has 45 MLAs, while the Congress has 22 and CPI(M) has one. The AAP is looking to set foot in Gujarat and Himachal Pradesh.

Gujarat elections
The Gujarat assembly’s term ends on February 18, 2023. This was a good time to announce elections to this state as well, as has been the tradition, but the ECI decided to postpone this announcement, probably to allow the Union government – also the BJP – time to announce large projects in the state before the model code of conduct kicks in. During the model code of conduct (MCC) period, such announcements would have become illegal and liable to punishment.

Despite this being a tradition, this is the third time since 1998 that the announcement of Gujarat assembly elections have been de-linked from that of Himachal Pradesh.

Polls were conducted simultaneously in Gujarat and Himachal Pradesh in 1998, 2007 and 2012, but were held separately in 2002-03, after the Gujarat assembly was prematurely dissolved soon after the Godhra riots.

In 2017, the EC decided to separate the two to avoid imposing the MCC for an unreasonably long time. This year too, it used a similar line to justify the delinking. That has been the thinking among experts.

Rajiv Kumar told reporters that since the terms of the two assemblies were expiring 40 days apart, the Commission decided to follow the example set in 2017. This seemed a good enough excuse, but opposition parties have been crying foul, blaming the ECI for partiality.

The ECI’s partiality has been visible earlier also, especially during the last Bihar and West Bengal elections. Even with t he country in the grip of the Covid pandemic and even with Bihar reeling under intense floods, the elections were not postponed. It has been claimed that this was done to appease the ruling party at the centre, which wanted quick implementation. The fact that Chief Minister Nitish Kumar later dumped the BJP is another story altogether.

In West Bengal, the elections were held through an unprecedented 8 phases, despite the most populous state, Uttar Pradesh, having had less number of phases. This was, probably, done to allow the BJP to enable cadre and manpower mobilisation through the several assembly segments. The ECI’s lack of spine, its blatant bias and complete disregard for public health was completely exposed in this.

The fact that the Mamata Banerjee-led Trinamool Congress virtually wiped the BJP out of contention is, again, another story altogether.

The contestants
Gujarat elections have generally been a two-party contest. This time, however, the Aam Aadmi Party, encouraged by the massive win in 2022 Punjab assembly elections, seems to have pushed its large spanner in the works. The AAP is leading an aggressive campaign to make the fight three-cornered.

In the 2017 Gujarat assembly elections, the BJP came out victorious in a relatively close fight against the Congress party. The Bharatiya Janata Party won in 99 assembly constituencies and secured 49.05% of the valid votes polled in the state. Congress won in 77 assembly segments (41.4 votes share) of the 177 where the party fielded its candidates.

In the 182-seat Gujarat assembly, 13 assembly constituencies were reserved for candidates belonging to the Scheduled Caste while 27 to the members of Scheduled Tribe.

Current composition
The Congress’ numbers in the Gujarat assembly have been on a decline since the last elections, with several of its MLAs defecting to the BJP. The Gujarat assembly has currently 111 members from the BJP, 61 from Congress, one each from Nationalist Congress Party and Bharatiya Tribal Party, and one independent.

After the 2017 Assembly poll, as many as 17 sitting Congress legislators have joined the BJP, bringing down the party’s strength from 78 to just 61 now.

A third of the Bharatiya Janata Party legislators in the Gujarat assembly may not be picked up for contesting in forthcoming elections as the party plans to field fresh faces. A spokesman of the party said: “At least 30% of our 99 MLAs will be replaced with new faces who worked hard for the upliftment of the party in their respective constituencies. The measure is also taken to ward off the anti-incumbency factor.”

The party has been under attack by Delhi Chief Minister Arvind Kejriwal-led AAP which is eyeing to make a dent in the support base of the BJP in Gujarat and grab power. “We don’t consider AAP as our main challenger. So long as Congress party leaders make strong noises, we are confident that we will repeat our winning performance even better in the coming elections,” BJP leaders have said

The AAP factor
The Aam Aadmi Party (AAP) is trying to get a foothold in Gujarat and is gearing up to challenge the BJP and Congress. With the rise of regional parties like AAP and AIMIM, the BJP is likely to face a tough challenge this year coupled with anti-incumbency.

With its plans in Himachal Pradesh having derailed following a series of setbacks, the Aam Aadmi Party (AAP) is now concentrating on the Assembly elections in Gujarat.

The perception in sections of the party is that the senior leadership, including Delhi Chief Minister and party convener Arvind Kejriwal, seem to have given up on the hill state and is putting all their efforts into Prime Minister Narendra Modi’s home state where they stand a chance of winning a sizable number of seats.

AAP manifesto
On August 10 Aam Aadmi Party convener and Delhi CM Arvind Kejriwal promised that if voted to power in Gujarat, his party will give a monthly allowance of Rs 1,000 to all women above the age of 18 years if they are willing to accept such a grant.

Aam Aadmi Party’s national convener Arvind Kejriwal recently gave a “guarantee” that his party will provide free electricity up to 300 units per month to each household in Gujarat if voted to power.

Kejriwal announced a five-point manifesto for farmers including loan waivers of Rs 2 lakh for farmers, free electricity for 12 hours during the day, buying crops at the minimum support price (MSP) and compensation of Rs 20,000 per acre of land in case of crop failure was some of the other guarantees announced by Kejriwal.

The Congress fiasco
Meanwhile, the Congress is in a state of flux and chaos. Congress’ internal organisational election and Rahul Gandhi’s Bharat Jodo Yatra appear to be the immediate top priority for the party, with the main elections at hand. The party’s own people have asked Rahul Gandhi to postpone his Bharat Jodo Yatra for a while and visit Himachal and Gujarat for publicity. This appeal does not seem to have worked.

Congress is also grappling with defections by senior leaders and legislators and lack of direction from the top leadership in Delhi.

The Congress is focussing more on Gujarat’s Saurashtra belt, which once was said to be the stronghold of the party. Currently, the Congress is losing ground in the area. From Padyatra to a dedicated media cell, the grand old party is trying hard to regain Saurashtra.

We will ahve to wait and see how the two states shape up in the ballots.