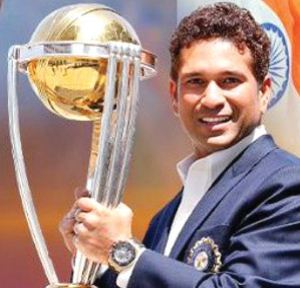 Sachin Tendulkar has been found to be is among the 50 most influential people on Twitter this year. He is currently at the 35th spot. This was revealed by an annual research carried out by consumer intelligence company Brandwatch. The legendary batsman is ranked above the likes of American actors Dwayne Johnson and Leonardo Di Caprio, and former first lady of the United States Michelle Obama among others. American singer Taylor Swift is at number 1 spot and Prime Minister Narendra Modi is placed at number two in the list.

MALALA YOUSAFZAI MARRIES PAK CRICKET OFFICIAL
Recent  Nobel Laureate Mala, (24), who lives in the UK, has tied the knot. She married Asser in Birmingham and celebrated at home with their families. Malala – a campaigner for girls’ education and who survived after being shot at 15 by a Taliban gunman in Pakistan in 2012 – let know of her status over social media.

She married Asser in Birmingham

In her Tweet, Malala (@Malala) wrote: “Today marks a precious day in my life. Asser and I tied the knot to be partners for life. We celebrated a small nikkah ceremony at home in Birmingham with our families. Please send us your prayers. We are excited to walk together for the journey ahead. @malinfezehai”.

IN PORTUGAL IT IS NOW ILLEGAL FOR YOUR BOSS TO TEXT YOU AFTER WORK
PORTUGAL is not not friendly with bosses, it seems. The country has just made it illegal for your bosses to text you or message you in any way after office hours. This is part of the new labour law that the Portuguese parliament has passed. This was made to attract “digital nomads” to the country but also give workers a healthier work-life balance.

The new laws imposes penalties on employers for contacting their staff after work hours. This has come in the middle of a huge work from home situation,
where houses have turned into temporary offices. It has been the common refrain that work from home not only entails longer hours, but also is an invasion into people’s privacy.

EX-SA PRESIDENT FW DE KLERK, WHO FREED MANDELA, DIES AT 85
Recent FW de Klerk, the last president of an apartheid South Africa and the one who decided to release Nelson Mandela died on Thursday morning at his home in Cape Town, the FW de Klerk Foundation said in a statement. He was 85. His historic decision led to Mandela becoming the first Black head of state in a country which had been for long ruled by a minority White population.

De Klerk was awarded the in 1983 Nobel Peace Prize

The statement by the Foundation read: “Former President FW de Klerk died peacefully at his home in Fresnaye earlier this morning following his struggle against mesothelioma cancer.” He is survived by his wife Elita, his children Jan and Susan and his grandchildren, the foundation added. Following Mandela’s release, the two politicians had worked together to bring an end to the policy of racial segregation. De Klerk was awarded the Nobel Peace Prize in 1983 for his “work for the peaceful termination of the apartheid regime, and for laying the foundations for a new democratic South Africa.”

WHY TUVALU’S FOREIGN MINISTER SPOKE AT COP26, STANDING IN KNEE-DEEP WATER?
Recently the foreign minister of Tuvalu, a tiny Pacific island nation located halfway between Hawaii and Australia, delivered a speech, aimed at the United Nations COP26 climate summit, standing knee-deep in sea water dressed in a suit and tie.

His method of speech delivery was strong enough to receive worldwide attention. In his speech Simon Kofe warned that small Pacific island nations, like his, were even more vulnerable to the effects of climate change.

A video of his speech was aired at the climate conference in Glasgow. “The statement juxtaposes the COP26 setting with the real-life situations faced in Tuvalu due to the impacts of climate change and sea level rise and highlights the bold action Tuvalu is taking to address the very pressing issues of human mobility under climate change,” Kofe said before his video message was aired. His statement and poise highlighted how such a low-lying nation is susceptible to be lost in sea due to global warming.

BILLIONAIRE HEIRESS IVY GET T Y’S LAVISH WEDDING
Ivylove Gettythe great granddaughter of late billionaire oil tycoon J Paul Getty, who once unsuccessfully ran for US presidency, just got married. And it was a treat for the eyes. The lucky groom was photographer Tobias Alexander Engel and the marriage was a lavish spread in San Francisco. The 26-year-old Ivy Love is a model and an artist. As she walked down the aisle her dazzling John Galliano for Maison Margiela Haute Couture gown covered in mirror shards dazzled the guests. This was the description Vogue gave.

Vogue also noticed her Christian Louboutin shoes, a veil, a headdress and jewellery borrowed from the collection of her legendary grandmother, Ann Getty. Said Ivy: “When my beloved grandmother passed away, I knew I wanted to have the wedding in my house to honour her. Ivy was raised by her grandmother Ann, who died in 2020. A noted philanthropist and interior designer, she designed each room of the Getty Mansion, where the wedding reception was organised.

Another great voice fades away