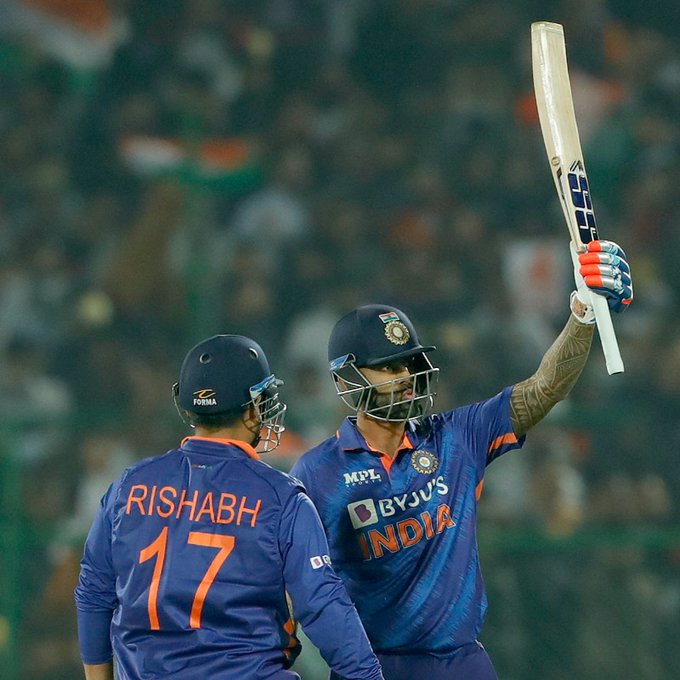 Back from Central Asia and the disastrous T20 World Cup campaign, Indians were back to winning ways, beating the touring New Zealanders by five wickets in the first game of the three-match T20I series at the Sawai Mansingh Stadium in Jaipur on Wednesday. India are now 1-0 up in the three-match series.

This was also the first match with a refurbished top management of the team, Rohit Sharma replacing Virat Kohli as skipper and Rahul Dravid taking up the role of coach of the national squad.

A sterling performance came from India’s Suryakumar Yadav (No 3), who top-scored for India with 62 from 40 deliveries. He and Rohit had a rollicking partnership that put on 59 runs for the second wicket. Rohit was two short of his 25th T20I fifty.

India, having won the toss, decided to field, something that has become a sort of tradition from the World Cup. New Zealand managed to hit up 164 for 6 in their 20 overs. Martin Guptill kept up the great form that her had shown during the World Cup and became the team’s highest scorer with 70 off 42 deliveries. He and Mark Chapman (63) paired to add 109 runs for the second wicket.

The successful ones among Indian bowlers were Ravichandran Ashwin (2/23) and Bhuvneshwar Kumar, who also got two wickets.

In the Indian innings Rohit had also added 50 runs with KL Rahul for the first wicket, setting the right pace for the chase. However, the World up runners-up were not giving up easily. In the last four overs their bowlers had India in a corner, restricting runs, and in the end they were so restrictive that India needed 10 runs in the final over.

The following happened in the final over:

Suryakumar Yadav was declared Player of the Match

The second T20I will be played at the JSCA Cricket Stadium in Ranchi on Friday.