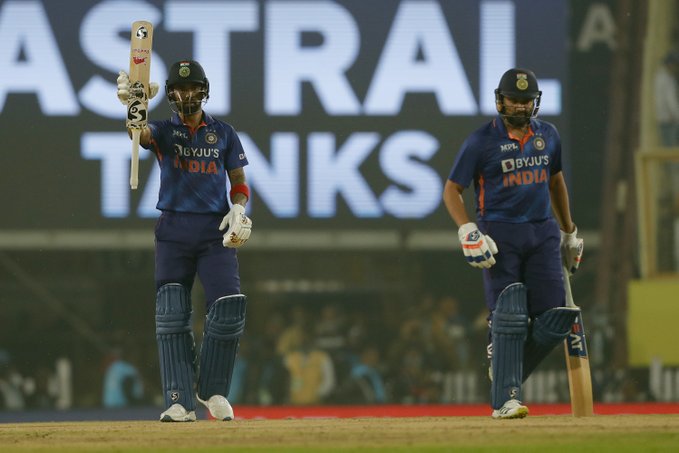 India won the T20 series versus New Zealand 2-0 at the JSCA Cricket Stadium in Ranchi on Friday, when they beat the Kiwis by seven wickets. This was the home team’s second consecutive win in the three-match series against the World Cup runners-up.

India won the toss and, again as per the new trend, elected to field. New Zealand managed to hit up 153 for six in their quota of 20 overs, opener Martin Guptil again getting into the groove, but managing to score 31 off 15 deliveries. Daryl Mitchell  also contributed 31 for in 28 deliveries.

In the bowling department India’s Harsal Patel took two wickets for 25 runs and Ravichandran Ashwin took one for 16.

India launched into the batting with almost a vengeance, as K.L. Rahul and skipper Rohit Sharma put on a 117-run opening partnership. Rahul hit 65 off 49 deliveries and Sharma 55 off 36.

That plinth was strong enough for India to easily build to a seven-wicket victory, with 16 deliveries to go. New Zealand’s Tim Southee was a success at the bowling, with 3 wickets for 16 runs.

The final T20 of the three match series is at Eden Gardens Kolkata on Sunday.
Harsal Patel was declared Player of the Match