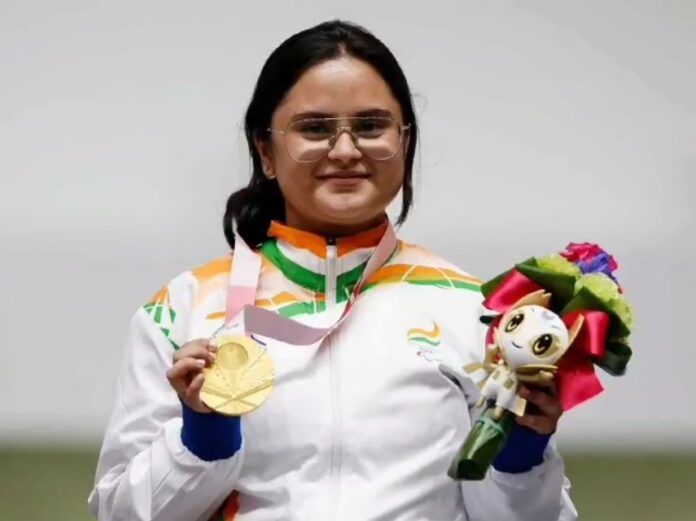 As the Paralympics Games entered the eighth day in Tokyo (it gets over on September 5), and by the time this magazine goes to print, India had picked up two gold, five silver and three bronze medals. One of the bronze medals declared earlier and which was contested saw the Indian athlete being disqualified. On the seventh day itself, India had picked up 5 medals, its best ever tally. Of that, one bronze was lost through disqualification, but on the eighth day one more bronze was added, as well as a silver medal.

Two of India’s gold winners – Avni Lekhara and Sumit Antil both made Paralympics records, with the latter even breaking his own personal world record.

The first gold for India came from Avni, from the 10m air rifle at the Asaka Shooting Range, in the SH1 Rifle Category (this sport class is designated to athletes with lower limb impairment for competition in rifle events), with a total score of 249.6, which is a new Paralympics record. She beat Rio Games silver medallist Cuiping Zhang of China (248.9).

The second gold came from Antil in F 64 category (athlete with a leg amputation who competes with prosthetics in a standing position) javelin throw for men. He threw the javelin to 68.55m, breaking his own world record of 62.88m, made at the World Para Athletics Grand Prix in Italy in 2019. The silver went to Australian Michael Burian, who threw to 66.29m.

The 19-year-old Avani was also the first medal in shooting in the Paralympic Games for India. Said Avni after her victory: “I can’t describe this feeling. I’m feeling like I’m on top of the world. It’s unexplainable.” Said Antil: “It was not my best,” meaning he has more in store and the future will see even better.

Winning the first silver was Bhavina Hasmukhbhai Patel, in table tennis in the Individual Class 4(athlete with below knee amputation and a prosthesis on one leg). In the final she lost to China’s multiple Paralympics gold winner Zhou Ying, 7-11, 5-11, 6-11. This is the first medal for India in the discipline. Bhavina said: “Everything is possible if you want to.”

The fourth silver came from Nishad Kumar in the men’s high jump T-47 category (athletes with unilateral upper limb impairment), with a jump of 2.06m. He was beaten to the gold by USA’s Roderick Townsend who jumped 2.15m.

The fifth silver came in the men’s high jump T63 category (Athletes with knee or above knee limb deficiency competing with a prosthesis), from Mariyappan Thangavelu who jumped 1.86m. The gold in this went to USA’s Same Grewe (1.88m).

The bronze medals came from Sundar Singh Gujjar, in men’s javelin (also F46), Singhraj Adana in the 10m air pistol SH1 category (upper and/or lower limb impairment for competition in pistol events) and Sarath Kumar in men’s high jump in the T63 category (Athletes with knee or above knee limb deficiency competing with a prosthesis), who jumped 1.83m.

DREAM COME TRUE
Avani’s was a dream come true. She was born on November 8, 2001 in Jaipur. She met with a car accident in 2012 and injured her spinal cord which led to her current condition. She started shooting after reading Olympic gold medallist shooter Abhinav Bindra’s autobiography A shot at history.

After her father encouraged her to take up sport, she tried her hand at different sports, including archery, but the inclination towards shooting happened thanks to Bindra’s book whom she considers her idol.

She began her professional shooting career in 2014. Soon, she won the gold medal at the National Shooting Championship in 2015 and 2016. She has now become only the fourth Indian athlete to win a Paralympics gold after swimmer Murlikant Petkar (1972), javelin thrower Devendra Jhajharia (2004 and 2016) and high jumper Mariyappan Thangavelu (2016).

BEATING AN ACCIDENT
Sumit Antil, the other gold winner, is also the World No. 1. He was born on July 6, 1998 in a Jat family in Khewda, Sonipat, Haryana. He lost his left leg below the knee after he was involved in a motorbike accident in 2015 at the age of 17. But he never gave up.

THE STAR
Devendra Jhajharia:, of course, is a known name in para athletics in India as well as across the globe. He was born in 1981 and hails from the Churu District in Rajasthan. At the age of eight, climbing a tree he touched a live electric cable. He received medical attention but the doctors were forced to amputate his left hand.
In 1997 he was spotted by Dronacharya Awardee coach R. D. Singh while competing at a school sports day and from that point was coached by Singh. He gave credit to his personal coach R. D. Singh for 2004 Paralympic Gold Medal, saying: “He gives me a lot of advice and helps me during training.”He has been coached by Sunil Tanwar since 2015.

MEN’S DISCUS
Yogesh Kathuniya, was born on 1997 in Haryana. He belongs to an Indian Army family. He suffered a paralytic attack at the age of eight which left him with coordination impairments in his limbs.
In Tokyo he sent the disc to 44.38m in his sixth and last attempt to clinch the silver. The gold went to Rio Paralympics gold medallist Batista dos Santos of Brazil at 45.59m.

Aries must keep a positive mindset