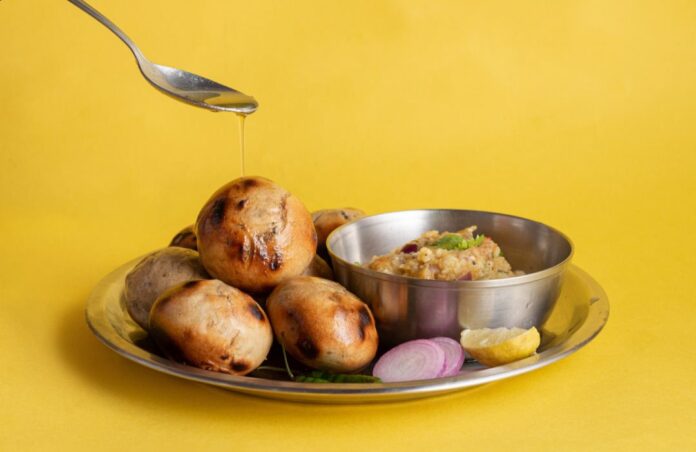 This isn’t a delicacy, per se, but almost a standard diet in some states of India, especially among the lower income group. However, this basically Bihari ‘cuisine’ is now available on thelas, as well as in some high end restaurants across many states. The sheer simplicity of this vegetarian fare is amazing, while also considering that there is enough food value hidden in each bite.

Actually, this simple food has a long history associated with it. Bihar’s litti (bati) chokha is said to have originated centuries ago as a staple food in the court of Magadha. According to some, the importance of litti chokha to Bihar is similar to the importance of rosogolla to West Bengal. Okay, that is overkill, but the sheer public acceptance of this fare is unbelievable.

As for its popularity, today litti chokha is not only popular in India, but has also made a special mark globally.

The rustic cooking style of litti chokha also makes it a somewhat exotic dish, delicious and filling. It was almost staple food for the farmers in Bihar once, because not only was it cheap and easy to make, it also had some very peculiar cooling properties, helping them stay agile and working throughout the singeing summers. It is healthy, with the use of very little oil and can be roasted or baked, depending on the type of tawa or coking utensil available and also depending on your taste buds.

If there is a comparison at all, it will have to be made with the ubiquitous sandwich, a simple dish of two slices of bread with butter and salad in the middle, grilled or not. That the Earl of Sandwich invented it does not take anything away from the sandwich’s appeal to even the common folk of England and now all over the world.

Probably, litti chokha, if promoted properly across t he globe, might hold such appeal one day.

The chokha is made with grilled eggplant which is a brilliant source of dietary fibre, vitamins, manganese, folate and phytonutrients like nasunin and chlorogenic acid that act as antioxidants. Litti, along with chokha, is a complete meal. Apart from Bihar (also Jharkhand, carved out of Bihar), litti chokha is also widely eaten in eastern Uttar Pradesh as well as in the Nepalese state of Madhesh.

Litti is basically a wheat flour cake that has been salted and baked. Litti is filled with sattu (fried gram flour) and some special spices and served with ghee.

So what is litti? It is basically a wheat flour cake that has been salted and baked. Litti is filled with sattu (fried gram flour) and some special spices and served with ghee. Litti is similar to Bati in appearance but there is a little difference. Litti is best eaten with brinjal bharta or mashed potato.

History
In the Mauryan Era (322 BCE to 185 BCE) and Kalinga War (261 to 265 BCE), sattu was used to make partial payments to battalions at war. The Mughals are believed to have introduced the practice of eating the litti stuffed with sattu along with shorbas (meat gravies) and paya (trotter gravy).

The litti is also popular among the Madheshi people of Nepal Terai. In the later part of the 18th century, the Shah rulers of Nepal granted several subsidies to new settlers in the eastern Terai region, and Indians were encouraged to come and settle there. From 1770-1780 several Bihari farmers suffering from the famines in the region migrated to the Nepal Terai, taking the litti chokha tradition with them.

However, Litti emerged as a ‘brave sepoy’, when the rebels virtually survived on it during the Mutiny of 1857. Tantia Tope, Rani Lakshmi Bai, and the likes chose it as their ‘food for survival’ as it can be baked without any utensils or much water in the jungles and ravines and stays in eat-worthy condition for more than 48 hours.

How to make
Preparing Dough Cover for Litti:
In a mixing bowl, take 2 cups whole wheat flour/atta (240 gm) and ¼ teaspoon salt. Also add 1 tablespoon of ghee or oil. Now add water in parts and knead to smooth soft dough. Add ¾ cup water. Depending on the quality of flour, you can add ¾ to 1 cup water. Knead till smooth and soft. Cover the dough and keep aside.

Sprinkle 1 to 2 tablespoons of water all over and mix the flour with water evenly. Do add more water if required. The sattu stuffing mixture should not be too dry or too wet. If the mixture is dry, then the dryness is felt when eating littis.

Stuffing & Shaping Litti:
After 30 minutes, now make small or medium sized balls from the dough. Sprinkling some flour, roll each dough ball to a circle of about 5 to 6 inches. Place 2 to 3 tablespoons of the stuffing in the centre. Pleat and then join the edges. Press the joined part and lightly roll the stuffed dough balls in your palms, so as to get a round shape. Keep aside.

Another method is to flatten the dough ball with your palms and make a shallow cup. Now place the stuffing. Gently bring together the outer dough cover in the centre, while pressing the stuffing. Join and then seal the edges. This is a bit of a tricky method. So please use the method which suits you.

Keep the prepared littis under a cotton towel or napkin, so that the dough does not dry out.

Prepare all stuffed littis this way and place them on a baking tray, which has been greased with some oil. Do grease the baking tray well, otherwise the littis can stick to the tray.

Baking Litti:
Place the littis in a preheated oven at 200 degrees celsius. Preheat the oven for 20 minutes at 200 degree celsius prior to baking. After 10 to 15 minutes of baking, remove the tray and flip each litti. Keep the tray back in the oven.
Again after 10 to 15 minutes, remove the baking tray and flip each litti. Place the tray back in the oven. This has to be done once or twice more for even baking of littis.

Bake till the crust looks done with some light brown or golden brown spots on them. Timing will vary upon the size and litres of the oven. It could take up to 45 minutes to even an hour. Brush the littis with some melted ghee all over. This step is optional and only to get charred spots on the litti. Secure the litti in a pair of tongs and place it on fire. Rotate for a few seconds till you see some charred spots on littis.

Serve these Bihari style litti with baingan chokha, aloo chokha and tamatar chokha accompanied with a small bowl of melted ghee. The litti is broken, dipped in ghee and then had with the chokha.

Making Baingan Chokha
Rinse 1 large baingan/eggplant/aubergine (420 grams) in water. Place it on a wire rack on a stove top or you can place it directly on fire. Keep turning the eggplant after 2 to 3 minutes on the flame, so that it’s evenly cooked. Roast the baingan until it’s completely cooked and tender. With a knife check the doneness. The knife should slide easily in baingan without any resistance. Remove the baingan and immerse in a bowl of water till it cools down. Then peel it and chop. Add the chopped bain in a mixing bowl along with its juices. Then add ⅓ cup chopped onions, ½ teaspoon chopped green chilies, ½ teaspoon chopped garlic and 1 to 2 tablespoons chopped coriander leaves. Add 1 teaspoon mustard oil. If you want, you can add ¼ to ½ teaspoon lemon juice for a slight tang. Season with salt. Mix everything very well.

Making Tomato Chokha
Rinse 2 medium to large tomatoes (200 grams) very well in water first. Then place them on a wired grill rack and begin to roast the tomatoes. You can also place them directly on the stove top. You can also grill the tomatoes or roast in the oven. But then you won’t get the smoky flavour. Turn them after a few minutes for even roasting. The tomatoes should get charred. Roast the tomatoes till they are completely cooked from within. With a knife check the doneness. The knife should slide easily in the tomatoes without any resistance. Once the tomatoes cool, then peel them and remove the charred skin. Chop them and add the chopped tomatoes along with their juices in a mixing bowl. Add ½ teaspoon chopped green chillies, ½ teaspoon chopped garlic, 1 tablespoon chopped coriander leaves, ½ teaspoon mustard oil and ½ teaspoon lemon juice. Season with salt as per taste. Mix very well.

Check the taste and add more lemon juice or mustard oil or green Chillies or salt if required.

Making Aloo Chokha
First boil or steam 2 medium potatoes (160 grams) till they are thoroughly cooked. Allow them to become warm. You can steam them in a pan or electric rice cooker or pressure cook them in 1.25 to 1.5 cups water for 5 to 6 whistles. When the potatoes become warm, peel and mash them. Add ⅓ cup chopped onion, ½ teaspoon chopped green chilies, ½ teaspoon finely chopped garlic, ½ teaspoon mustard oil and ½ teaspoon lemon juice. Mix very well. Check the taste and add more salt, lemon juice or green chilies if required.

It will be a title match to remember