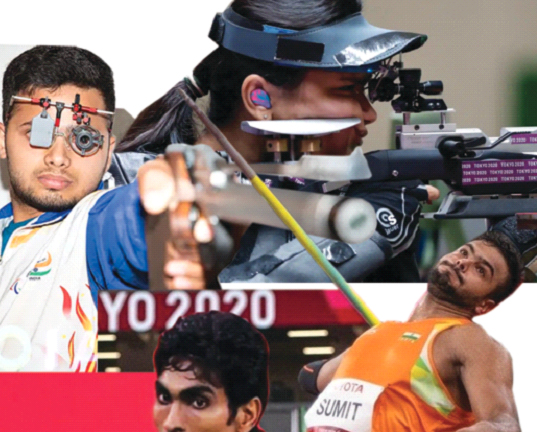 There is something about the psyche of Indians that make them work harder amid adversity. It could the genes that mutated in revolt as they absorbed and assimilated memories of the hundreds of years of domination by foreign forces; or it just might be the sudden dissolution of a state of denial. Whatever psychological aspect that guides Indians, especially its sportspersons, the truth is in your face. It was evident, again, when Indian Paralympics stars outshone their able-bodied counterparts in the recently concluded Tokyo Olympic Games.

In a broad statistical measure, the percentage of medals was high, as well as the overall position of the country in the medals tally. A study of medals also shows that the most medallists, in the para-Games were from the northern Indian state of Haryana. Haryana had also sent a number of athletes who turned medallists to the main Games. Maybe, Haryana is doing something right, and the rest of the country needs to follow.

Maybe the two Games aren’t really comparable on the same scale, but here is another bit of statistic. India sent 120 athletes for various competitions to the main Olympic Games. That total was an improvement on the tally of 117 sent to the Rio Olympic Games in 2016. Of the 120 Indians, there were 68 male and 52 female athletes. India did improve on its Rio performance of 2 medals (1 silver, 1 bronze) and even improved upon the London Olympics (2012) tally of 6 medals. But the percentage of medals was only 5.8% (out of total 120 athletes).

On the other hand, at the Para Games in Tokyo India sent 54 athletes (40 men, 14 women) for various competitions and the medal haul is an impressive 35.18 percent. At the Rio Paralympics India had won 4 medals (2 Gold, 1 silver, 1 bronze).

The very reason for sending more athletes to an Olympic Games is to increase the chances of medals. That is one of the primary concerns of the Target Olympic Podium Scheme (TOPS) of the Indian government. Maybe this needs a detailed study.

Here is another bit of interesting data for both the Games. Haryana, with just 2 percent of the country’s population, sent 32 athletes to the main Olympic Games, comprising about 26% of the total. Of the 32, three athletes from this state won medals at the Tokyo Olympics. That is a creditable 9.3 percent. The medallists were javelin thrower Neeraj Chopra (gold), wrestlers Ravi Dahiya (silver) and Bajrang Punia (bronze).

The Manohar Lal Khattar-led (he is the chief minister of the state) government in Haryana announced cash rewards of Rs 6 crore (1 crore = 10 million) to Chopra, Rs 4 crore to Dahiya and Rs 2.5 crore to Punia (at this point the conversion rate is 1USD = INR 74.83).

Even in the Tokyo Paralympics a huge chunk of Indian athletes had their roots in Haryana. Haryana sent 17 para-athletes, and 5 of them won 6 medals (2 gold, 2 silver, 2 bronze), out of a total of 19 medals which is 35.29 percent. This is close to the overall percentage of Indians succeeding at the Paralympics.

A study, called ‘Disabled persons in India… A statistical profile 2016’, quotes the 2011 census, saying: “in India, out of the 121 Cr population, about 2.68 crore are ‘disabled’ which is 2.21% of the total population. In an era where ‘inclusive development’ is being emphasised as the right path towards sustainable development, focused initiatives for the welfare of disabled persons are essential. This emphasises the need for strengthening disability statistics in the Country.

“There are ample reasons for developing a sound national disability statistics. Information on their socio-demographic profile is essential for the welfare of disabled persons.” adds  the report.

Sports, incidentally, can be a major take-off point in this venture. In September 2014, “In order to improve India’s performance at Olympics and Paralympics, the Ministry of Youth Affairs and Sports (MYAS) started the Target Olympic Podium Scheme (TOPS).This was revamped in April 2018 to establish a technical support team for managing the TOPS athletes and providing holistic support.”

It was a big start, but possibly more needs to be done, which can open a new avenue of sustenance and pride for many whose lives have been torn apart through personal disasters. Allied with physical rehabilitation, sports programmes can also promote psychological counselling and create paths that never before existed for these athletes. Sports facilities need to become para-athlete friendly.

Similar programmes and benefits have been imputed into several areas in the country. The Cricket Association for the Blind in India has done yeomen work in promoting the sport and helping those with challenged vision. These efforts can be incorporated within the programmes of the immensely rich Board of Control for Cricket in India.

It is essential that para-athletes are given pride of place in society. A help in that direction may come from the legal fraternity of the country. In passing the Rights of Persons With Disabilities Act, 2016, the government has shown that it wants to pay special attention to people of disabilities. Disabilities, as per the act, are severally categorised and treated with care. It becomes imperative for the sports bodies of the country to adapt applicable parts of this law into its ethos and system and, while allocating funds, also ask for the same for the government.

The basic principles of care can, thus, have legal protection as well as an allocation of funds. This, in turn, can start off certain areas of sporting activity that may have been impossible earlier. Such areas, such as creation of sporting facilities specifically for the disabled, will not only boost the sporting capabilities of the country’s para-athletes, but also boost their psychological condition.