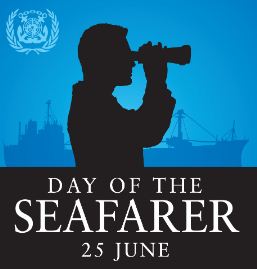 June 25; of each year is the “Day of the Seafarer”, recognizing the invaluable contribution seafarers make to international trade and the world economy, often at great personal cost to themselves and their families.

Governments, shipping organizations, companies, shipowners and all other parties concerned are invited to promote and celebrate the Day in an appropriate and meaningful manner.

The Day of the Seafarer was first celebrated in 2011, following its establishment by a resolution adopted by the Conference of Parties to the International Convention on Standards of Training, Certification and Watch keeping for Seafarers (STCW), 1978, held in Manila, Philippines, in June 2010, which adopted major revisions to the STCW Convention and Code.

The Day of the Seafarer has now been included in the annual list of United Nations Observances.