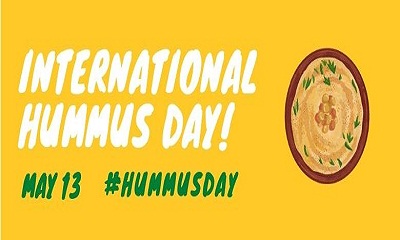 Yes, that’s it. It’s not important that today is the 13th and it is a Friday to boot (whatever that combination means), it is also the day of a strange food, hummus. Wait, hum… what? Yep, hummus, a strange Middle Eastern dip, actually. It’s okay if you haven’t even heard of it.

So, what is hummus? No big deal: it is a Middle Eastern dip, spread, or savoury dish made from cooked, mashed chickpeas blended with tahini, lemon juice, and garlic. Okay, tahini… What is that again? Tahini or tahina is a Middle Eastern condiment made from toasted ground hulled sesame. Get the point?

So, back to hummus. It is the standard garnish in the Middle East includes olive oil, a few whole chickpeas, parsley, and paprika. In Middle Eastern cuisine, it is usually eaten as a dip, with pita bread.

Every year, on May 13, hummus lovers unite to celebrate International Hummus Day. The day also spreads awareness for this delicious food that’s considered a cross-cultural phenomenon.

Hummus is an Arabic word that means chickpea. Despite the Arabic roots of hummus, some historians believe this food originated in Egypt. Still, other groups of people, including the Lebanese, Turks, Jews, and Syrians, have tried to take credit for inventing hummus.

Ben Lang, co-founder of Innovation Israel, along with his friend, Miriam Young, founded International Hummus Day in 2012. Inspiration for the day came from another kind of spread called Nutella. When they realized World Nutella Day celebrated the hazelnut spread, they thought hummus deserved its own day as well.

Additionally, people all over the world eat hummus because it’s free of many common food allergens, including gluten, nuts, and dairy.