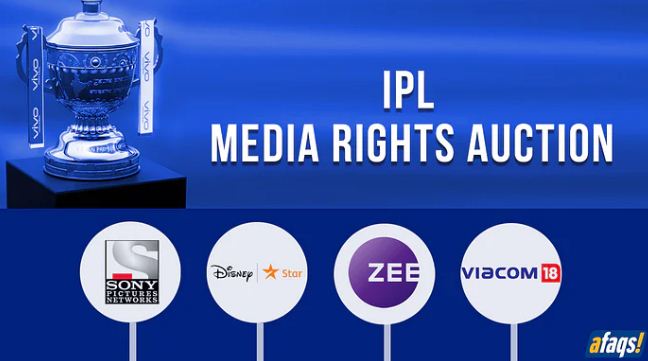 June 13, 2022, Monday. It was a black Monday for the economy in India. The stock markets crashed to a historic low, wiping off Rs 7 lakh crore of investor wealth, the Rupee slipped to a historic low and the atmosphere was grim everywhere, except at the BCCI offices, where bidding reached the sky for its jewel in tgeh crown, the Indian Premier League (IPL).

The IPL’s media rights were being sold, and even though Amazon had pulled out of the race last week, Disney Star won the IPL Indian sub-continent TV rights for an unbelievable Rs 23,575 crore, while Viacom18 bought the digital rights with a bid of Rs 20,500 crore.

The valuations were near impossible, monies that boosted the board’s earnings nearly three times 2023-27. This has been the growth over the 2018-22 cycle.

As proceedings were completed on Tuesday (June 14), the collective media rights value rose to a massive Rs 45,950 crore, including bids for non-exclusive digital rights.

“Star has retained Indian TV rights of IPL for next five years while Viacom18 has got the digital rights. The combined per match value only from Indian TV and digital rights per game is 107.5 crore. With these bids, monopoly of one broadcaster in IPL ends,” said a senior BCCI functionary.

Sony brought IPL to Indian TV homes for the first 10 years from 2008, while Star Sports (TV) and Hotstar (digital) were India’s IPL platforms for the next five.

Package A (Indian sub-continent TV tights) for 410 IPL matches across five seasons from 2023 to 2027 has been sold for Rs 23,575 crore, which is effectively Rs 57.5 crore per game, the official quoted above said.

In terms of value, the TV bid was worth Rs12,525 crore more than the last cycle. Back then, it was Sony who had made the biggest bid worth Rs 11,050 crore but was outsmarted by Star India’s all-or-nothing approach and thus fell in the face of their consolidated bidding.

With an extra 110 matches being played in this rights cycle, the per match value has gone up by 56% from last time (Rs 57.5 crore per match from Rs 36.8 crore per match). “These are still very good numbers considering this space is not going to grow at the same speed as digital,” the official said. “This may be the last media rights cycle which saw enough interest. In another five years, TV value of this scale may not remain feasible.”

The biggest gains for BCCI came in the digital category. The Rs 20,500 crore value is a big jump from the Rs 3,900 crore top bid Facebook (now Meta) had made in the previous rights cycle. India has about 795 million broadband subscriptions and over 500 million smartphones, as per a Federation of Indian Chambers of Commerce and Industry report of 2021. Forty million Indian households paid for 80 million online video subscriptions and 400 million subscribers consumed bundled content in 2021.

The bidders could not have missed these numbers. The report says the number of screens in India would reach one billion by 2024-25. But for Amazon opting out at the last moment, the final value in this category could have gone through the roof. It’s still an exponential rise in terms of per match value. Facebook’s highest digital bid was worth Rs13 crore per match in the previous cycle. That has risen to Rs50 crore per match.