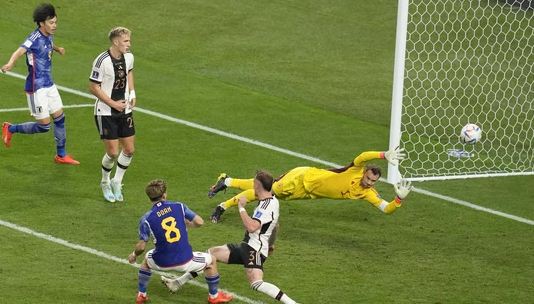 Another huge upset rocked the FIFA World Cup on November 23, as Japan beat favourites Germany 2-1 in their Cup opener. The other day Saudi Arabia had shocked Argentina.

Japan stunned Germany with a late comeback, with goals from Ritsu Doan and Takuma Asano at the Khalifa International Stadium. Japan must have been watching Saudi Arabia’s win on repeat the day before, because they managed to turn the game around after a dominant first half from Germany.

The Japanese players kept going with Ito chasing down balls and causing endless problems for the German defence. Gonda’s heroics in goal were also vital in securing Japan a well-deserved win. He will be re-watching that quadruple save for many years to come.

Japan had never previously beaten their European opponents, but they capitalised on German errors and missed chances to secure a famous victory in the first game of Group E.

France beat Australia 4-1
Defending champions France began their Cup campaign with a 4-1 win over Australia in Group C at the Al Janoub Stadium in Qatar. Australia took the early lead after Craig Goodwin scored in the ninth-minute. Soon, Adrien Rabiot equalised for France in the 27th-minute and Oliver Giroud gave them the lead in the 32nd-minute. Kylian Mbappe made it 3-1 for France in the 68th-minute, with Giroud completing his brace in the 71st-minute. Giroud also became France’s joint-highest goal-scorer, levelling with Theirry Henry at 51 goals.

Morocco, Croatia draw
Morocco held 2018 World Cup runners-up Croatia to a 0-0 draw as both teams took a point to open their Qatar campaigns on Wednesday. Luka Modric’s Croatia had more of the ball but failed to break down the Morocco defence. The Morocco players showed attacking intent and fought till the last minutes to eke out a draw. Belgium plays Canada later in the day, also in Group F.

Spain win big
Ferran Torres scored twice as Spain thrashed Costa Rica 7-0 in a Group E clash at the Al Thumama Stadium. Spain made a mockery out of Costa Rica’s backline, scoring four times in the second-half to pile more misery on the Central Americans, who already seemed down and out after trailing 0-3 at half-time. Dani Olmo had opened the scoring before Marco Asensio and Torres scored once each to put Spain in control at the break. Torres made it 4-0 shortly after the break, before Gavi, Alvaro Morata and Carlos Soler spark Spain’s biggest win at World Cups.