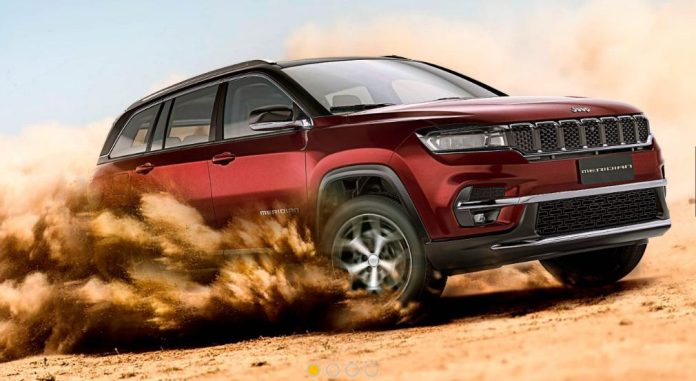 The Jeep Compass isn’t that old a brand in India. Yet, it seems to have reached the end of the road here. From its launch, it had a brilliant run in the country, but with other brands coming in that segment, especially KIA, Mahindra and Tata Motors, Compass sales may have already peaked. So it is now the new old Compass and the company has launched its big brother, the Jeep Meridian, a 7-Seater SUV. This is basically a rebranded Jeep Commander, a larger version of the Compass, which will directly be in competition with the likes of Skoda Kodiaq, MG Gloster and the Toyota Fortuner. The Commander is on sale in select international markets.

The new model comes with some India-specific tweaks and interior changes. Jeep dealers have already started accepting pre-bookings for SPECIFICATIONS the SUV at a token amount of Rs 50,000, while deliveries are expected in May 2022. The Meridian will be manufactured at Stellantis’ Ranjangaon factory near Pune.

The SUV will also be exported to right-hand-drive markets. The exact launch date is yet to be revealed, but it is likely to be introduced by May or June 2022. During the announcement of Meridian, Nipun J Mahajan, Head of Jeep India said, “The Jeep Meridian is our latest offering for the Indian market as part of our 2022 product strategy. We wanted to announce the name with an innovative activation and the K2K drive through the length of India is in line with the name of our new model.We tested the SUV on every kind of terrain India has to offer – by taking it on a challenging journey from Kashmir to Kanyakumari.”

FEATURES
The Jeep Meridian dashboard layout is similar to the one offered in the Compass. Instead of all-black scheme, the new 3-row SUV gets a brown and black interior scheme. Adding to it, the leather upholstery has a perforated and quilted pattern. The new Meridian has all the features that are accessible in the Compass. It gets a 10.1- inch touchscreen infotainment system with wireless Apple CarPlay & Android Auto. The SUV is equipped with electrically adjustable front seats, a 10.25-inch digital instrument console, wireless phone charging, dualzone climate control, panoramic sunroof, etc. The new Jeep Meridian also comes with a powered tailgate and a 9-speaker Alpine sourced audio system. For safety and security.

The company is yet to reveal the power and torque output; however, it is likely to offer the same output as the Compass. While powering the 5- seater model, this diesel engine produces 170bhp and 350 Nm of torque. A six-speed manual gearbox driving the power to the front wheels will come as standard. A 9-speed torque convertor automatic gearbox will be offered in the front-wheel-drive and allwheel drive (AWD) system.

PETROL VERSION
The new Meridian will also receive a petrol engine at a later stage. The SUV is likely to get a 1.3-litre turbocharged petrol engine that powers the Commander. This engine churns out a maximum power output of 187bhp and 270 Nm of torque.

The India-spec Jeep Compass is powered by a 1.4L turbo petrol engine producing 163bhp and 250Nm. Jeep is claimed to have achieved close to 82% localisation levels. The new model is positioned above the Compass, which is priced between Rs 17.79 lakh and Rs 29.34 lakh. The new Meridian is expected to cost around Rs 30 lakh to Rs 40 lakh. It will rival the likes of the Skoda Kodiaq, MG Gloster and the Toyota Fortuner. Engine Options: The new Jeep Meridian will get the same 2.0-litre, four-cylinder multi-jet diesel engine that also powers the Compass. However, for Meridian, it is likely to be tuned to deliver 200 hp of power.

WHY THE NAME MERIDIAN?
Jeep says that the Meridian name is inspired by the 77th meridian east line of longitude which passes through the length of India connecting some of the most beautiful states and cultures.

HOW MUCH BIGGER THAN THE COMPASS?
The upcoming Jeep Meridian is expected to be around 364 mm longer, 41 mm wider, and 42 mm taller than the Compass.

All-England final: Lakshya blown out of court by Dane Axelsen